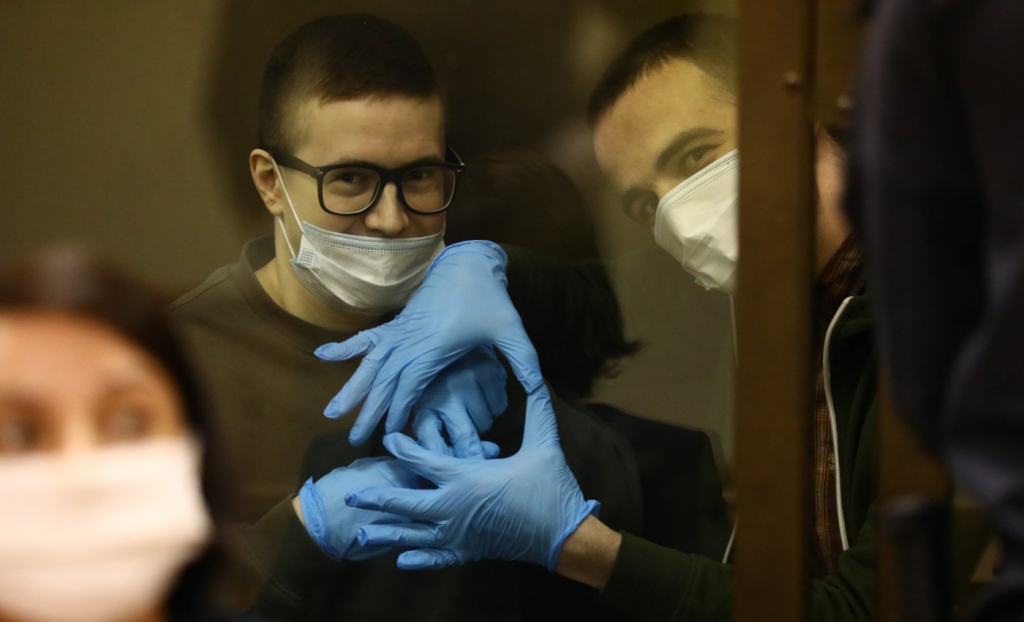 Network Trial defendant Viktor Filinkov tells a joke: “A programmer, a businessman, and an industrial climber planned to overthrow the government.”

The trial of the “Network terrorist community,” whose alleged members have been charged with violating Article 205.4.2 of the Criminal Code, is winding down in Petersburg. The Second Western Military District Court has heard the case made by the prosecution, who asked the court to sentence Viktor Filinkov and Yuli Boyarshinov to nine and six years in prison, respectively. The court has also heard the cases made by the defense teams for both defendants. Today, Filinkov and Boyarshinov made their closing statements.

10:48 a.m.
At the previous hearing, on June 17, the prosecution and the defense made their closing arguments. Prosecutor Alexander Vasilenko asked the court to sentence Filinkov to nine years in a medium security penal colony, and Boyarshinov to six years.

The defense team of Boyarshinov, who pleaded guilty, asked the court to make note of their client’s “inactive” role in the events described by the prosecution and sentence himrs to no more than four years and five months in prison and not impose a fine on him.

A scene from the courtroom in Petersburg: Yuli Boyarshinov’s lawyers are in the foreground.

In line with their defendant, Filinkov’s defense team insisted that his guilt had not been proven by investigators, and the documents that formed the basis of the indictment against him had been falsified by FSB officers. Defense lawyer Vitaly Cherkasov reminded the court of the circumstances of the arrest of Filinkov, who spoke in detail about being tortured [by FSB officers].

The court allows Filinkov to make a closing argument.

“I apologize in advance to everyone involved in the trial: I will be repeating the arguments of my defense lawyers,” he says.

Filinkov intends to “go through the indictment.” He begins by saying that none of the witnesses identified him as [the alleged Network’s] “signalman.”

“I assume this is yet another fantasy on the part of [Petersburg FSB investigator Gennady] Belyaev or [Petersburg FSB field officer Konstantin] Bondarev [who arrested and tortured Filinkov]. How I am supposed to defend myself from this?” Filinkov asks.

He says that he had not seen some of the documents in the case file before. He is probably referring to the documents identified as “The Network Code” and “Congress 2017.”

“Whom did I provide with means of communication? None of the witnesses said anything about it, and only the defense questioned the witnesses about it,” Filinkov says emotionally.

Filinkov quotes the indictment: “Filinkov, Boyarshinov, Pchelintsev, and Shishkin were directly involved in joint training sessions.” Filinkov says that Shishkov was not involved in the training sessions, and Boyarshinov participated in only two events. And in any case, they studied first aid, not capturing other people or storming buildings or shooting firearms.

11:31 a.m.
“‘Clandestine Security’—page 3 of the indictment. What did this ‘elaborate system of security’ consist of? Three methods are mentioned in the seventeen volumes of the criminal case file: aliases, PGP encryption, and Jabber,” says Filinkov.

Filinkov lists the aliases and says they were not means of conspiracy.

“‘Redhead’ [Penza Network defendant Maxim Ivankin]: I saw him, and he’s a redhead—that’s very conspiratorial. ‘Twin’: as far as know, he has a twin brother,” says Filinkov.

Filinkov moves on to PGP encryption. He explains that, in practice, the two or three keys used for such emails consist of a few “very, very large” numbers that cannot be memorized, so they are stored on the computer. Filinkov also notes that the message’s subject, sender and recipient are not encrypted—only the text of the message is encrypted.

Viktor Filinkov gives a short primer on how email works—before the head judge cuts him off.

“We don’t need a lecture about encryption programs,” he says.

The defendant tries to reply.

“The prosecutor doesn’t understand how it works—”

“Then you get together with him and explain it,” says the judge.

“It provides privacy, but it doesn’t provide secrecy,” he says, now in reference to the Jabber protocol for messengers.

11:41 a.m.
“It’s built on fantasies—that’s exactly how the ‘Network terrorist community’ was created,” Filinkov continues. “And it was badly built to boot. There are incorrect dates [in the case file], and [Penza FSB investigator Vyacheslav] Shepelyov [tampered] with the [text] files.”

Filinkov recalls how he, Igor Shishkin, and Ilya Kapustin were tortured, and mentions the verdict and sentence in the Penza trial.

“I don’t understand the prosecutor’s position. I expected him to drop the charges,” Filinkov says. “He won’t look at me. I can’t expect a response from him, can I?”

“I don’t consider myself guilty, and I ask you to acquit me,” Filinkov concludes.

“I’ve been in jail for two and a half years now. I can’t say that this prison experience has been totally negative. Isolation has taught me to love people and freedom even more, to appreciate even more my loved ones, who have supported me all this time. So, I want to use my closing statement to thank the people who have supported me: my parents, my spouse, and all my close friends.

“I would like to underscore once more that I have never held terrorist views, neither t hen nor now. I am sorry for what I did, and nI’m glad that my activities caused no actual harm to other people. I ask the court not to punish me harshly. That is all.”

Defendant Yuli Boyarshinov’s closing statement was so short that artist Anna Tereshkina didn’t have time to finish her sketch.

“The nine years in prison the prosecutor has requested are probably a token of respect for what I’ve been doing. This is what occurred to me about [Yegor] Zorin’s testimony: five narcotic substances were found in his blood when he was examined, but only two narcotic substances were found on his person—MDMA and marijuana. Neither MDMA or marijuana was found in his blood, however, while the five substances that were found were other synthetic drugs. Due to my circumstances, I’ve had the opportunity to talk to drug lords, and they have told me that synthetic drugs are quickly flushed from the bloodstream, and if [Zorin] had used marijuana, it would have remained in his blood. I would guess that the FSB officers knew that Zorin was a drug user, so they planted MDMA and marijuana on his person, thinking they were popular drugs. But they guessed wrong: he was using neither the one nor the other. It’s hard to believe that he drove around for a year [with these drugs on his person] and didn’t use them, while using everything else in sight. In a situation like that, you have to have courage to turn yourself in.

“As for the other [suspects and defendants in the case] who confessed and testified—Yuli [Boyarshinov] and Igor [Shiskin]—they acted pragmatically. They didn’t believe that any other outcome was possible. I understand them.

“I would like to mention everyone who has been exposed in this case. First of all were the Petersburg FSB, the Penza FSB, and the Interior Ministry [the regular police], which carried out the orders of FSB officers without hesitation, without asking any questions. Then there wasthe prosecutor’s office, which has only been good for giving me the runaround and bringing in a colonel [as trial prosecutor] to read aloud from a piece of paper, refuse to respond to me, and ask the court to sentence me to nine years. I don’t understand whether [the prosecutor’s office] is independent or not. What happened to the ten years I was promised? The FSB officers promised to send me down for ten years. It is unclear whose initiative this is [to sentence Filinkov to nine years]. Is the prosecutor’s office or the FSB behind it? It basically doesn’t matter.

“Then there was the Investigative Committee, whose employees sent [Filinkov’s complaints of torture] from one place to the next, losing all the evidence in the process. There were the employees of the Federal Penitentiary Service, who refused to document the injuries [suffered by Filinkov and other defendants when they were tortured by the FSB], who promised that video recordings would not be lost, but then it turned out they had been deleted. There were the courts that remanded us in custody and extended our arrests. There were the legislators who made up such laws. All of them have disgraced themselves. I don’t know what the solution to this situation is. That is all.”

12:04 p.m.
After the hearing, Filinkov’s defense team, Vitaly Cherkasov and Yevgenia Kulakova, said that, during the closing arguments, the prosecutor cited documents that had not even been read out in court, which is forbidden by the criminal procedure code, and attributed statements to Filinkov that he had never made.

All illustrations by Anna Tereshkina, who writes, “Viktor Filinkov and Yuli Boyarshinov made their closing statements today, and before that Viktor took part in the closing arguments. His eloquent speech, which disarmed all the scoundrels, made an incredible impression. Everyone whom he listed really has disgraced themselves, and they stand before all of us dirty, confused, and unable to do anything about it.” Thanks for Ms. Tereshkina’s kind permission to reprint her drawings here. Translated by the Russian Reader.