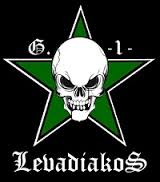 Near the sacred Mount Parnassus and the ruins of Delphi there is a small town of Levadia. Will of fate I was fortunate enough prove to be in this place and get acquainted with the local fan scene.

As soon as you come here at once there a positive mood. Railway station painted with anti-fascist and fans slogans. On the streets of the city is similar everywhere hanging leaflets with the invitation to anti-fascist demonstration. Also a lot of stickers Panathinaikos, there is a very strong Fan club. You can find stickers fan clubs Olympiakos and AEK. That is not surprising because Levadia is located from Athens just one hour away. In general, in Greece there is a problem with the support of local teams in the province, but Levadia you can meet a lot of stickers and graffiti ultras Levadiakos.

The town itself is a classic Greek village, the population is about 20 thousand people. From one end of town to the other is within walking distance that are generally very convenient and economical. In the center there is a variety of trendy boutiques and cafes, the Russian village in any comparison does not go. In Levadia is flowing a small river. Residents of the city and the surrounding area for a long time living from agriculture and livestock. Levadia surrounded by mountains, so the views here are excellent. The city is mostly known for fact that there makes the best souvlaki in Greece. As residents of the former Soviet Union probably know about the village in the Crimea with the same name, the colonel of the Russian army and a national hero of Greece Lambros Katsonis named his manor in honor of his native city.

The stadium is located on the outskirts of the city, and in fact a few minutes walk from the center. On the road to it you can see the qualitative graffiti APOL Gate 1. The infrastructure in itself certainly weak, there is not even fan shop. The match I saw only a few people who had a club attributes, even a scarf to get here is problematic. But the cops around the stadium is full. However searched at the entrance is not particularly serious, do not climb into the pockets as happens in Russia.

Before the game, talked with local school children and learned that fans Levadiakos last week traveled to Tripoli to travel, had to fight with the local fans, the fans Levadiakos were punished by the Football Federation. The match with Kerkyra fan sector was banned and hooligans were forced to watch the match on television. But the team did not stay without the support they sent instead of himself young people and gave them a drum.

Children are engaged in a football academy and receive free tickets to the stadium. The games they make diy banners with a balloon and a white cloth. They are considered to be something like youthful fan group Levadiakos, age they have somewhere 10-16 years. Directly on the sector they showed me a bag with pyro, which was dragged past the the cops. Then they decided to have fun and started throwing stones from the tribune in the riot police who were on duty at the walls of the stadium.

When the match started in the stand banged drums and everything began to sing. Singing in Greece are able to all and school children no exception, almost without a pause. They also cut out of paper confetti, made 2 banner on one of which painted crossed-out swastika. In the second half of the match they set fire to several pyro and unfurled a banner "Forza Apolara" (full name of the team Athlitikos Podosferikos Omilos Levadeon). Pyrotechnics did not like the cops. One of them climbed into the sector and started talking to the initiator, who eventually ordered to come the next day in their police station. The problem of such cities is that everyone knows each other, including the police. As it turned out Levadia resides a lot of immigrants from the former Soviet Union. The parents of one of the boys moved here from Kiev. He speaks only in Greek, but his sister with difficulty speak Russian and Ukrainian.

After the game we went to the fan-bar Levadiakos return drum. It is on the other side of town, we came go there for about 15 minutes. The building is decorated with blue-green graffiti. Inside sat all the fans and drank beer. On the wall hangs a stand with photos of trips and performances fans, the room is decorated with various pictures in blue-green and anti-fascist symbols. Scarves on their group says "Support your local team" that tells us about the problems faced by similar clubs throughout Greece.

Provincial fans in general in Greece nicest guys, they do not have that arrogance which is the fans of the big clubs. Guests are always welcomed with open arms,  are treated to and offer to spend the night. Since the city is located near Athens they are not very spoke flatteringly about the inhabitants of the capital. In fact it is the same way as in the Russian provincials do not like the inhabitants of Moscow. Fans Levadiakos primarily stated that they have in the best souvlaki in all Ellada, and I have to try them. Next to the fan club is located just a cafe.

Then they began to talk about their movement. As it turned out in Livadia Nazis in general practically no there are only two right wing and both run in the police. Absolutely antifascist town, no chance for the Nazis to take root here. It is connected primarily to the fact that close to Livadia is located tragically famous village of Distomo, where the Nazis during the war shot civilians. On the road to Delphi located a large monument in memory of the resistance fighters, during the war in the local mountains acted partisan detachments and actively supported the people in villages. I told them about the situation in Russia, they were shocked by how many people been brainwashed right propaganda. Stalin they also do not like because of unjustified repression against the civilian population.

In general, the Levada live very nice people and the city itself is beautiful, but at the same time the ultras scene is small. They try to do different initiatives, but the Athenian teams compete fairly difficult. However, the true spirit of football live here in such places, which has not yet reached a total commerce of modern football. As for antifa hooligans there are no problems at all and can not be. Remains only wish them to continue developing their local scene.