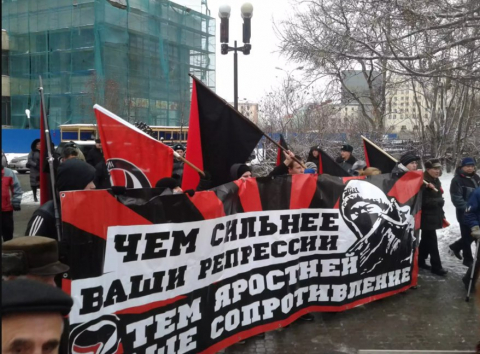 The Russian authorities continue to prosecute and jail our comrades. In the summer and fall of 2016, demonstrations of solidarity with the convicts were held all across the globe. The anarchists are furthermore suffering repressions in jails, but keep the spirit up. If you think that we have missed something important in our article or are aware of other repressions, feel free tocontact us at abc-msk@riseup.net

In November, three and a half years after imprisonment, anti-fascist activist Alexey Gaskarov, convicted in the framework of Bolotnaya Square case, was finally freed. “I regret that we have agreed to take part [in the trial]. We should have, like Soviet political prisoners, turned our backs and kept silent, and not take it as an attempt to find out the truth”, Gaskarov said in his first interviews after his release.

“A few videos clearly showed that the incriminated episodes had happened before the riots started. I believed it would be a simple case, I would show them the video, and everything would be ok.

“Instead, I was showing the evidence, the judge was nodding, but there was no reaction. The whole trial looked as if the decision had already been taken, the verdict written, and everyone was just hoping this to end quickly”, Gaskarov said.

Gaskarov wrote ten tips on how to help a political prisoner, which include: help the advocates; quickly inform the others if the prisoner reported abuse and other violations of their rights; do not let the individual feel themselves lonely: write them letters, try organising different sorts of activities;send deliveries and money to the prisoner and their family; do not leave the individual alone after they were released – help them adapt to the new life.

The anarchist Alexey Suguta, convicted to 3.5 years in prison following a case trumped up by the Centre E (for extremism – Avtonom.org), is still locked up in a penal colony in Angarsk, Irkutsk Oblast. He is set to be released in May 2017. Alexey is constantly pressed by the prison’s administration, he has been repeatedly sent to SHIZO (solitary confinement in severe living conditions – Avtonom.org), and is not even allowed to meet his mother. His mother Olga has told about how to better write letters to prisoners: “First of all, you should not pity them. This is a taboo. No need for pity, the guys are not dead. Once Ilya Gushchin (another prisoner in Bolotnaya Square case – Avtonom.org) has even written that pity doesn’t make sense because they are also living a life. Dmitry Buchenkov, in turn, wrote in his latest letter that soon after imprisonment he has heard someone saying: ‘You don’t survive in prison, you live there.’ Pity brings down your spirit.”

Crimean anarchist Alexander Kolchenko, also known as Tundra, has recently turned 27. He celebrated his birthday in jail. Kolchenko was convicted to 10 years in prison in the framework of the so-called Crimean terrorists case. He was taking part in demonstrations against Russian troops entering the peninsula and arson attack against the local offices of Putin’s party United Russia and the nationalist Russian Community of Crimea. 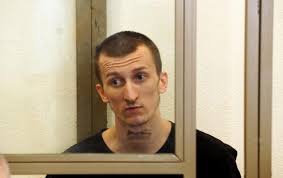 Kolchenko is not feeling down. “I’m ok. After human rights activists’ visit, I was given access to newspapers. Just a few, [but] they said it’s all they could find. But before the activists’ visit they couldn’t find even this… Since no methods apart from complaints proved effective, I will keep on that way.

“Lately I have not read books, only the newspapers I was given. [If] watching only the TV news, you’ve got no idea of what is really happening in the country – those few good newspapers now serve me a reminder.

“I am still upholding my anarcho-communist views. Although I am interested in theoretical conceptions and experience of left social revolutionaries, syndicalists, communist worker councils, autonomists, left-wing nationalists, etc. Since the military conflict in eastern Ukraine began, I have taken a pacifist internationalist stance, and, in contrast to some self-proclaimed Left, I was not supporting any side.”

Anarchist Ilya Romanov, proclaimed ‘terrorist’ by military tribunal, has been transported to Mordovia. Romanov was injured by the explosion of a self-made firework in October 2013, but the unlucky pyrotechnician was qualified as terrorist by Centre E in Nizhny Novgorod and sentenced to 10 years in penal colony. Romanov lost hand in the explosion and needs an artificial limb.

Romanov’s senior family members that tried to send him money by post were detained by police. All his bank accounts have been suspended.

Historian and anarchist Dmitry Buchenkov is still awaiting a trial in the framework of Bolotnaya Square case. According to the investigators, Buchenkov attacked policemen and was turning toilet boxes upside down. The repressive authorities are perfectly aware of their lies: Buchenkov was not on Bolotnaya Square that day, visiting his parents in Nizhny Novgorod. The man captured by video cameras, whom the investigators claim to be Buchenkov, is looks like a completely different person (the real Buchenkov is on the right).

Complaint against his arrest and politically motivated prosecution has been sent to the European Court of Human Rights.

“Here in the prison I have started to feel a deep hate for the modern state apparatus and class society. It is a very important acquisition for a revolutionary. I did have this feeling before, but on a purely cognitive level. Now, this has transformed into a deep emotion. I should thank the Investigative Committee for forming my identity as a revolutionary”, Buchenkov writes from his confinement.

Local activist Elizaveta Tsvetkova from Taganrog, RostovOblast, was sentenced to a year in prison following her distribution of materials critiquing the police. The investigators claim that she downloaded the materials from social network VK, printed them out and distributed on public transport stops and light poles the night before the Police Officer Day in November 2014.

“Maybe I’m just easily impressed, but I think that you can’t stay away after the publications about the trials that have gotten a lot of public attention: the case of police officer Evskyukov that has shot dead civilians in a supermarket, and tortures in [police department in] Tatarstan where a man was killed, Tsvetkova explained.

“These cases provoke negative attitude to illegal actions of policemen. I am sure that the cases of bribery, torturing and killings should be stopped.”

In the Czech Republic, the judge announced the verdict to Russian anarchist Igor Shevtsov who has long lived in Prague. The judge has acknowledged the insufficiency of evidence that Shevtsov attacked the house of the Defence Minister with Molotov cocktails(however, refusing to declare him not guilty).

Yet, the judge has found Igor guilty of causing damage to prison property and condemned him to deportation from the Czech Republic for two years. Igor appealed the decision and managed to get it annulled in the court of higher jurisdiction, which nevertheless banned him from attending “public anarchist events.”

“From the beginning, it was clear that the verdict is all too weird,”writes Antifenix, the project about anarchists in the Czech Republic whose prosecution is politically motivated. “It is weird because nowhere does it explain what a public anarchist event means. Although the verdict specifies “marches and demonstrations”, no one really knows how to implement it and where the borders of the ban lie. This led to police taking initiative and defining virtually every public gathering that Igor attends as anarchist. As a result, every month Igor receives a list of events that he cannot attend, including concerts, discussions, solidarity demonstrations, and charity meetings.”

Anarchist activist Igor Martynenko, a member of the Autonomous Action,was unexpectedly detained while leaving a training seminaron human rights activism in Irkutsk in April.Martynenko is an active participant of the project Strategy 18, the joint project of the Anarchist Black Cross and Irkutsk human rights activists, named after Article 18 of the Russian Constitution that guarantees that the rights and freedoms of the citizens are directly applicable.

“In my speech at the trial I said the case was politically motivated. The judge pretended not to know what Centre E is, so I had to enlighten them,” Martynenko said.

In Crimea, the prosecution continues against the anarchist Alexey Shostakovich, who keeps participating in demonstrations despite the oppressive atmosphere established on the peninsula. Following his participation in the demonstration of solidarity with Russian political prisoners, he was fined 20,000 roubles ($340).

“Today I have realised that in the issues crucialfor the security services, the judicial system of Russia is ready to violate any law. Clearly, the FSB and police want to show that the rules do not apply to them in the same way,” Shestakovich said.

Two months after, when the activist applied for a permission to hold a small demonstration, he was detained for a few hours, with his home searched. Shestakovich was charged with cannabis consumption and fined 4,000 roubles ($70).

Another Crimean activist Sergei Vasilchenko got 10 days in jail for allegedly keeping ‘extremist materials’. The house of the activist was searched, with his father threatened with a gun.

Public events in the framework of International Campaign of Solidarity with Anarchist and Antifascist Political Prisoners in Russia was held in Belarus, the Czech Republic, Finland, France, Israel, Spain, Sweden, and Ukraine. In Russia, political prisoners were supported in St. Petersburg, Kaliningrad, Nizhny Novgorod, Moscow and Simferopol.