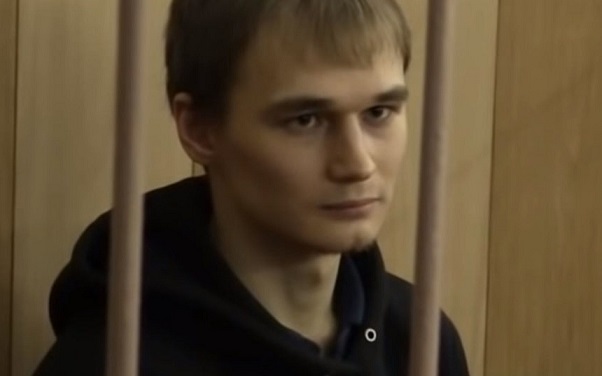 Anarchist Azat Miftakhov, a mathematics and mechanics graduate student at Moscow State University,  has been remanded in custody until March 7, 2019.

Golovina District Court Judge Sergei Bazarov has remanded Azat Miftakhov in custody for a month, until March 7, at the request of police investigators. The police suspect Miftakhov of involvement in a January 13, 2018, incident in which a window in the Khovrino office of the United Russia party was broken and a smoke bomb was thrown inside.

The only evidence in the case is the testimony of a secret “witness” who emerged three days ago. Allegedly, the witness was near the United Russia office the night of the incident. He saw six young people. Three of the young people smashed the window and threw a smoke bomb in it, while the other three stood off to the side. The so-called witness supposedly recalled Miftakhov as being among the group who stood and watched, yet he was unable to describe neither what Miftakhov was wearing or his facial features, only his “expressive eyebrows.” The witness, however, did not contact the police for an entire year since, he explained, his phone had gone dead at the time and, subsequently, he had been busy with his own affairs.

Miftakhov was detained by law enforcement officers on the morning of February 1 on suspicion of making explosives, a criminal offense as defined by Article 223 Part 1 of the Russian Federal Criminal Code. He was held for twenty-four hours at the Balashikha police station, where law enforcement officers tortured him, demanding he make a full confession. Only on the evening of February 2 was Miftakhov officially detained and sent to the Balashikha Temporary Detention Facility.

On February 4, however, a court refused to remand him in custody due to a lack of evidence. Over the next three days, police investigators were unable to muster any evidence against Miftakhov, and so, on February 6, he was released from the temporary detention facility without charge.

As Miftakhov was leaving the detention facility, he was detained by men in plain clothes and taken to the Interior Ministry’s headquarters for Moscow’s Northern Administrative Division, where he was told he had been detained in another case, an investigation of alleged disorderly conduct outside the United Russia office in Khovrino on January 13, 2018. An investigation into vandalism (Criminal Code Article 214 Part 1) had been opened in January 2018, but Russian law does not stipulate remanding vandalism suspects in custody during investigations.

In an amazing coincidence, just as Miftakhov was detained a second time, the case was reclassified as an investigation of disorderly conduct, as defined by Criminal Code Article 213 Part 2. People suspected of disorderly conduct can be remanded in custody, and Miftakhov suddenly had become the main suspect in the case. On February 10, the Golovina District Court in Moscow refused to remand Miftakhov in custody, postponing the hearing until February 12.

Miftakhov denies the charges against him. He believes he has been framed because of his anarchist views.

Over a thousand lecturers, professors, researchers, and students from leading Russian and international universities have signed a petition in Miftakhov’s defense, include MIT linguistics professor Noam Chomsky and Viktor Vasilyev, president of the Moscow Mathematics Society. Mikhail Finkelberg, professor at the Higher School of Economics and Skoltech, Boris Kravchenko, president of the Confederation of Labor of Russia (KTR) and member of the Russian Presidential Human Rights Council, and Russian MP Oleg Shein have agreed to stand surety for Miftakhov.

Call for solidarity: another wave of arrests and torture against Russian anarchists

In order to donate to the legal defense of Azat Miftakhov and other Russian activists:  Anarchist Black Cross Moscow PayPal : abc-msk@riseup.net  (include the comment 'for Azat'.)

Azat Miftakhov: Abducted for the Third Time in a Week

Yana Teplitskaya writes: “Today, Azat Miftakhov was abducted for the third time in a week. (That is, he was abducted once, but allegedly “released” two times.) Attorney Svetlana Sidorkina was informed that Azat had been released from the Temporary Detention Facility. But then it became clear no one had seen him since his release. Ultimately, it transpired that he had simply been taken to a police station. The court hearing at which Azat was either to be released or remanded in custody was scheduled for today.”

For a day and a half, lawyers have been unable to see Azat Miftakhov, an anarchist and Moscow State University graduate student who was detained yesterday. Yesterday evening, Miftakhov was taken from the Balashikha police station as a defense counselor looked on and taken to parts unknown. Miftakhov was bruised and surrounded by eight cop. It has been twenty-four hours since he was last seen. No one knows his whereabouts, his condition, and the charges against him.

On the other hand, Ren TV and Rossiya 24 have broadcast photos and videos from the Miftakhov’s search and interrogation. In one of them, an investigator mocks Miftakhov, who is handcuffed, when he claims he is afraid of being tortured. The Center “E” officers take a selfie with their prisoner. (I was unable to find any other photo, so that’s why it illustrates this post.)

The folks who were detained along with Miftakhov, but released yesterday, report they were beaten and tortured with electric shocks. The torture was so bad that yesterday Miftakhov “didn’t look like a human being.” He attempted to slash his wrists to keep from being tortured again. Today, lawyer Svetlana Sidorkina heard an investigator in court talking to someone about it.

The authorities did not produce Miftakhov in court today for his own custody hearing.

Like a year ago in Petersburg, torture is happening practically in broad daylight, but we don’t know what to do.  Yesterday, when I left a message on the Moscow police’s hotline, the operator almost laughed at me. Just as Putin claimed [at a recent meeting of the Council for Civil Society and Human Rights] that FSB officers don’t torture people in vehicles, she doubted what I was saying.

“He’s being tortured right in an Interior Ministry building? Right now? Give me a break,” she said to me.

A missing person report on Miftakhov has been filed, and lawyers have been trying since yesterday to get access to him. But what’s the point?

I hope this hell ends for him as soon as possible.

Translation by the Russian Reader.