Ecological camp protest, broken by the movement to protect forests Khimki, working for two weeks - from July 15. It involved people of different views, including anarchists. Loggers who did not have any permits for logging, environmentalists have driven out, but left the guards, who once unsuccessfully tried to oust the camp. During the work camp on its participants twice with obscene curses assaulted an unknown man, during the second attack machine ruffian was blocked by logs and handed over to police.Double-camp participants found that illegal logging began in another part of the forest: the defenders of the forest came and stopped it. Technique loggers were forced to remove from the forest. 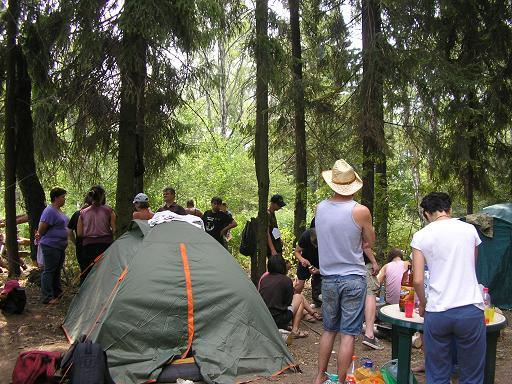 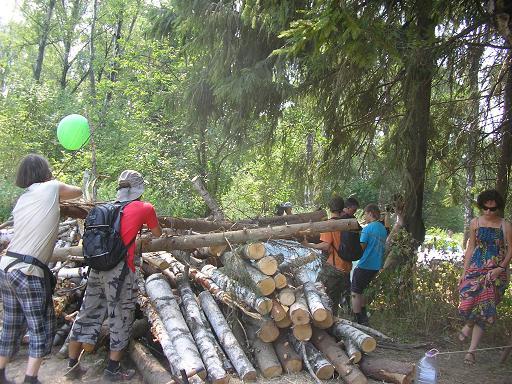 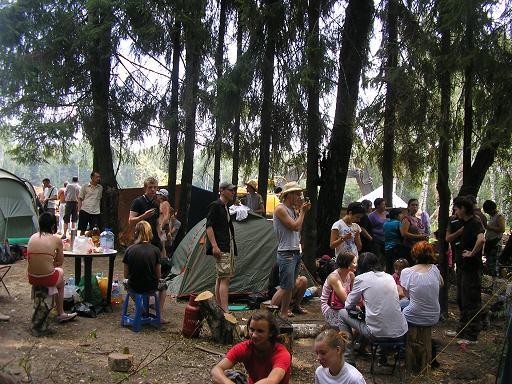 The last such signal was sent the evening of July 22 ( http://belousoff.livejournal.com/158282.html ): Clashes lumberjacks with environmentalists and journalists, but the cutting was stopped.Defenders Khimki forests suggest that morning of 23 July loggers try to resume logging, and name all the aid ( http://ecmo.ru/news/n-1080/ ).

July 22 was an action against the destruction of forests in Khimki Moscow, near the Government House. Environmentalists from the Movement to protect forests and activists Khimki Moscow Soviet planned it as a collective petition to the President of Russian Prime Minister Vladimir Putin.Several participants submitting letters were detained by police, the rest were able to deliver a letter to the reception the Prime Minister. As described being at the scene reporter "ICD", to 14 hours from receiving the government were about 50 people.

The bulk of the participants were activists of the movement to protect forests and Khimki Moscow council, members of the ecological camp protest in defense of Khimki forests, activists of different political organizations - the liberals, socialists, anarchists. Several people brought with them the logs, on which was written "Firewood Khimki woods.Later the logs were taken away to unknown people came out of the government building and dressed in work overalls.

First held impromptu outdoor press conference, during which the leader of the movement to protect forests Khimki Evgeny Chirikov and coordinator of the Moscow City Council Sergei Udaltsov told about the situation in connection with the resumption of logging of trees in the woods near the airport Sheremetyevo.

After the press conference, when assembled went into the waiting room for the filing of the treatment, police detained five people, including coordinator of the Moscow City Council and the Left Front Sergei Udaltsov, chairman of the Moscow Ecological Federation Georgis Dionysus, an activist Mossovet Constantine Kosyakin.All of them were taken to the ATS "Presnensky".

As later told by one of the detainees, Sergei Udaltsov, in the evening on July 22 in the judicial sector № 378 Presnensky district of Moscow Judge Jura considered the administrative case against him. The material was compiled by st.20.2 (participation in an unsanctioned rally).Sergei Udaltsov refused to sign the protocol because it considers the case file fraudulent. He explained that no meeting was not at the house of the government, the transfer of collective treatment, and actions of the police were not based on law. Udaltsov said the applicant's request to postpone the case so that he could call witnesses and counsel, but the judge dismissed them and formally considered the matter, acknowledged Udaltsova guilty of an offense by presenting him a fine of 1000 rubles.Udaltsov considers arbitrary law enforcement and judicial links in one chain and intends to appeal against the decision in Presnensky court.

The others detained during a protest outside the White House issued a subpoena on July 28.

Remaining at liberty activists managed to pass the reception call to Vladimir Putin, despite the fact that there allowed only two people. Main requirements:

- Rescind the order of the Prime Minister Prime Minister Vladimir Putin, № 1642-r dated November 5, 2009, under which 145 ha park Khimki moved from the forest land for construction of a toll motorway Moscow - St. Petersburg.It is about laying track version, which cuts the unique oak grove near Moscow in 1100 hectares in two parts, leading to the imminent degradation and loss of ecosystems;

- To create a working commission of the Presidential involving representatives of all interested parties to resolve controversies related to the project route Moscow - St. Petersburg Ring Road.

An hour before the rally started defenders Khimki woods near the White House in the Russian Information Agency - Novosti press conference on the theme "Building the highway" Moscow-Petersburg ".It was attended by First Deputy General Director of FGU Roads of Russia Yevgeny Nosov and General Director of "Production Association" Heat "Alexander Semchenko. Representatives of the Movement to protect forests and Khimki Moscow Ecological Federation also attended the event and asked participants to actively press conference questions.

According to environmentalists, Yevgeny Nosov and Alexander Semchenko assured the audience that the organization they represent, do not intend to abandon plans to build a toll highway "Moscow - St. Petersburg Khimki through the woods, and permission for felling trees and building" will soon be. "As compensation, property developers intend to plant 44 hectares of plantations in ... Dmitrov district, Moscow region.

Asked by journalists why we should not build a highway bypass of the forest, one of the participants of the press conference said that the land outside the forests belong to someone, they need to buy, so this project can only lobby for those who want to cash in on the construction.

Representatives of the developers claimed that members of environmental protest camp, broken in order to prevent further illegal felling of forests Khimki, receive money for their social activities.The participants of the press conference accused the environmentalists of setting fire to two tractors and woodsmen have expressed their intention to claim damages.

Indeed, on the night of July 17, not far from the tent camp on fire one (not two) tractor.Participants camp denied any involvement, calling the fire a provocation. ( http://www.ikd.ru/node/14117 , ibid photos)

Details of the campaign to protect forests Khimki http://ecmo.ru/