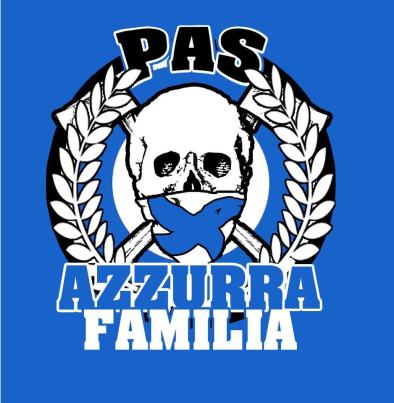 Azzurra Familia club was created in 2013 after fleeing of several members from the leading club, Blue Vayeros. The reasons for such withdrawal was the mismanagement of the leaders for the organization of the curva but also unusual support for the team management, they work regardless of the tragic mistakes of them.

So they decided to work with independent creating a new club keeping distances from the administration of  PAS Giannina.

The foundation principle of the club is to support the group to anyone who play field or groups to better organize the curva and to maintain the level of the fans of the team in high standards in greek  football ultras scene.

During these two years of the club, Azzurra Familia members accepted an unequal war by the team management, after they ignored the request of its members for meeting with then in order to discuss their concerns about the future of the team. The member of this club support the president of the team, whatever he does.Although they control the local media and journalist for their reasons. they dont want opposition in the stadium so that they make war to us with propaganda. Still, the same people act as vigilantes after sending the police several times in club control, and that give orders to local cops to an intimate checks to members of clubs anywhere in the city (street, homes etc.).

Nevertheless, Azzurra Familia continues its battle for an independent PAS Giannina, by the current administration, but also from greek football mafia which arranges who will win the game. This effort has found ally and the other club, Apei Rotan, which everyone together give their fight by the west curva corner. Still, several old fans who had stopped coming to court, they start to come again, while happy event constitutes dealing several new man with the club, giving strength to all that the forward.

Concerning the curva, the club in cooperation with Apei Rotan club managed to create several times subvert and imaginative coreos. Shouting for ninety minutes trying to convey their passion for football players, so that they in turn to fight for victory.

As to away games, the club tries to give as much as possible the present, so PAS Giannina to feel that not only plays the ever. Among the best tour of the club is the one in the nearby Corfu Island, in Athens (against Apollon Athinon at Rizoupoli stadium), in the city of Veria but also the tour in the Toumba stadium, against PAOK.

Relative to other clubs in Greece, Azzurra Familia has no formal partnership with an equivalent from abroad. But with regard to within the country, Club has good relations with ultras of Ethnikos (Pinezes club) and Niki Volos (Blue Angels club).

The greatest enemy of the club is the Gate 13 (Panathinaikos Athens) ue to several incidents in our playing area, but in theirs as well, and the fans of OFI Crete (Snakes club and Krites club). Our hatred for OFI Crete ultras started a fight barrage on the island of Rhodes in 2001.

The club not does operate for several years and can the experience be missing however its members are sure that will manage the target and that we will stay for many years in greek ultras scene.

for the city, for the shirt, for your people