My assumption of guilt 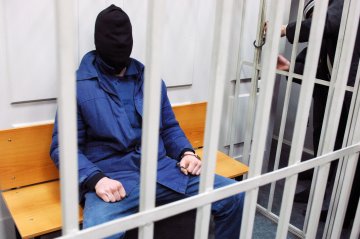 The number one spinners were anti-migration bloggers, very much concerned about the human rights of their Nazi comrades. Now they scream about a “New Guantanamo”, although I do not think they had anything against the previous one. Some of the real human rights activists swallowed the hook, but the fact is that hoods on the heads of the accused are in the common best interest both for themselves and the investigation – if their faces are broadcast all over the tv, witness testimonies become unreliable.

My own feeling however is that investigators have picked up the right people, although not necessarily all of them. And I believe, that Tikhonov was not merely the executor, but also the planner of the murder. What it comes down to is an unknown man who had been spotted by anti-fascists at a previous press-conference held by Stanislav Markelov, photographed and thrown out fromthe event by anti-fascists (his photos have been distributed via various anti-fascist and mainstream media, for example here, I believe that he was a scout involved in the plot, but after being revealed was replaced by Khasis.

What exactly happened on that April day? Personally I doubt that Tikhonov planned a murder, I believe that Parinov acted without his permission. If you want to kill someone, it is not very clever to take three inexperienced teenagers along, who are likely to screw up in one way or another. On the other hand, before that day the atmosphere in the Moscow Nazi scene was that of all-mightiness – in the previous years, a small circle of people had murdered dozens of migrants, and in Tikhonov's and Parinov's circles it was completely common to murder with impunity. However, even if murder was planned, I am certain that Tikhonov was forced to go underground against his own plans, and not so much due to police efforts as to the efforts of Stanislav Markelov.

But as the clever guy that he is, Tikhonov quickly reorientated, and went on to collecting guns and whatever else wouldbe necessary for an underground cell. I believe, that Stanislav and Anastasia were not the first, nor the last persons he murdered during these 3 years – a good candidate for Tikhonov's work is for example the murder of Caucasian Rasip Halulov on the 3rd of September this year. He was on his way to court where he was accused of membership in a group which beat up and stabbed Nazi activists in the Moscow metro. Halulov's group was named “Black hawks” in the media, although apparently they never called themselves that.
According to this article  Tikhonov was busted because amateurs, independently from government officials, had broken into the correspondence of Yevgeniya Khasis on Russian Facebook copy “Vkontakte” . It was logical, that Tikhonov was caught due to someone else's mistake – he is probably too clever himself to screw up in that way. But this is the necessary flip-side of the underground way of life – as your contacts to the outer world are limitted, you have little choice in picking the people you work with. And it is hard to assassinate someone completely on your own, as an assassin should not reveal one's face, but for a scout it is almost impossible to hide without gaining undesired attention.
The Russian mainstream media has speculated a lot as to Yevgeniya's nationalitysince she has a Jewish surname. But this just shows the ignorance of journalists towards the Nazi movement, as the nationalities of Nazis should no longer be of surprise to anyone. Already mentioned murderers of Stanislav Korepanov had Tatar surnames. Maksim Martsinkevich, who ran the popular “Format 18” website where videos of cruel beatings of migrants were published, had Polish roots. Roman Ragimov, the Nazi who beat a Tadzhik man to death in Kirov in 2003 was Azerbaijani. The father of David Bashelutskov, who cruelly murdered Azerbaijani man in Volgograd and was arrested in the beginning of this year in Moscow for his membership in Nazi pagan group which planted bombs to a mosque, a McDonald's outlet and other places, was Armenian. Alexei Dzhavashishvili, recently arrested leader of the “White wolves” Nazi group, who is accused of 11 murders and one attempted murder, is Georgian. The most diligent Nazi serial killer in Russia thus far, Arthur Ryno who was recently sentenced for 20 murders and 12 attempted murders, had a Chukchi father. Yevgeniya is also not the first Jewish person in the ranks of underground Nazi groups – according to some sources Nazi sympathizer Alexander Koptsev, who wounded 9 persons with a knife in a Moscow synagogue, is Jewish. Rostislav Hoffman, suspected of being a member of the Borovikov Nazi gang from St. Peterburg which murdered at least six persons, is also Jewish. Hoffman himself, was apparently executed during an internal purge of the group. The multinationality of Nazi movement is not a merely Russian phenomenon – for example probably the most famous Swedish (former) Neo-Nazi Jackie Arklöv had a Liberian mother.
As to Yevgeniya, according to mainstream news, she was raised by an alcoholic single mother, so one can speculate about a failed relationship with the father – which is also the case with many more of the aforementioned people. But this would take us on a tangent, as Nazism is not a diagnosis – mentally ill persons do not murder in such a systematic and deliberate way, not for an idea. To claim that Nazis are mentally ill, would be an underestimation. And the term “Neo-Nazi” is a similar kind of underestimation – although present day Nazis have a continuously increasing spectra of ideas, the core of their ideology is still the same as in the 1930's. These people are by no means harmless clowns dressing up infunny outfits, they already manifold deserve to be called the same names as their predecessors.
S2W
Мнение анархиста, Национальный вопрос
Антифа
Станислав Маркелов
Анастасия Бабурова
S2W
Antti Rautiainen