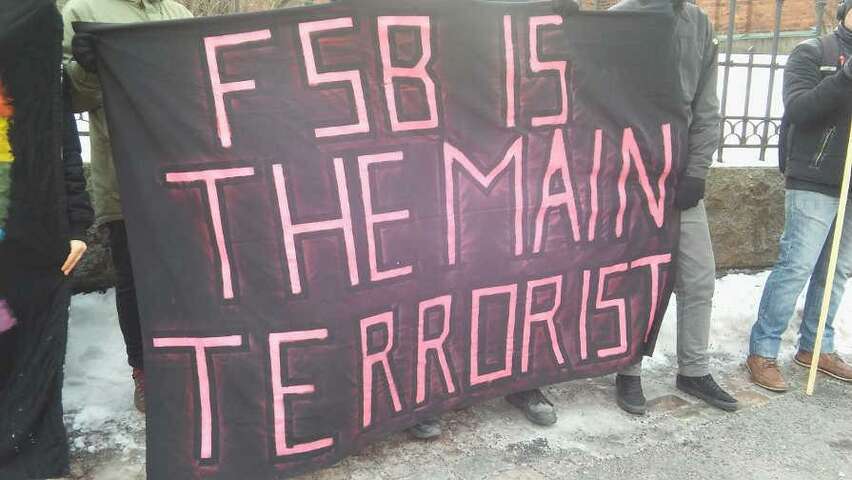 Lawyers for Viktor Filinkov and Yuly Boyarshinov, two of the defendants in the “network case”, are now preparing for their trial. The defendants in the case are Russian anti-fascists who were arrested – and tortured by security services officers – in St Petersburg and Penza last year. They are accused of a so-called terrorist plot – a prosecution denounced by Russian human rights organisations as a frame-up.

Anti-fascists across Europe, as well as in Russia itself, have been campaigning for the charges to be dropped, and for those responsible for torturing the defendants to be brought to justice.

This is a report of an update on the case provided by Vitaly Cherkasov, lawyer for Viktor Filinkov. It was published on the Russian news web site OVD-info.

On 19 January, Vitaly Cherkasov, legal counsel for Viktor Filinkov, held a press conference on his client’s case in St Petersburg. After being under investigation for 13 months, Filinkov’s case has now been sent to court, and Cherkasov is free to discuss the evidence. According to Cherkasov, there is no substantial evidence in the case file against his client.

“We are concerned that the court will follow the prosecution’s lead and hold the trial in camera,” said Cherkasov. “Having studied the case file, we didn’t find a single document that would count as a state secret or other secret. We want the trial to be monitored by the public. We believe that with the help of the public and the press, we can convince the court in an open hearing to examine the case objectively.”

Viktor Filinkov was detained at Petersburg Pulkovo airport on 23 January 2018, but he was arrested only on 25 January. Later Filinkov recounted how he was tortured by FSB officers throughout the intervening two days.

“The case file contains my client’s testimony, which were given to the state-appointed lawyer,” Cherkasov stated. “This lawyer did not pay attention to the bodily injuries sustained by Filinkov.”

Initially, Filinkov gave statements that were advantageous to the investigators, but after he appointed Cherkasov as his legal counsel, he stated that he had made false confessions under torture. Cherkasov then requested that the investigation consider the initial testimony as inadmissible.

“Filinkov had been deprived of sleep, rest, food and water,” Cherkasov remarked. “He found himself demoralised and left without will to understand what was happening or to resist it. The practice of the Russian Supreme Court and the European Court of Human Rights suggests that such testimonies should be found inadmissible.”

Cherkasov explained that Filinkov did not consider himself guilty from the beginning – and reading the evidence against him has only strengthened his resolve.

“After this he nonetheless gave testimony to investigator Belyaev, in which he interpreted the case file in a way that he considered to be correct,” Cherkasov clarified.

Cherkasov told the press conference about the testimony of Yuly Boyarshinov, another detainee in the “Network” case.

On the basis of Boyarshinov’s statements, and an investigation report by criminal investigator Bondarev, it follows that Boyarshinov and his acquaintances participated in survival and self-defence classes run by a sports club. Cherkasov considers it strange that these particular young people were detained as terrorists given that many such clubs exist.

“In his testimony, my client explained that they were not engaged in preparations for an armed uprising,” Cherkasov remarked. “You all know full well that he associates himself with the anti-fascist movement, and that their opponents are nationalists. In his testimony Filinkov says: ‘We used these same [survival and self-defence] techniques for gaining skills which could be used to defend ourselves in situations where clashes with our opponents are possible.’”

Cherkasov also called attention to the fact that in the case files there were interrogation records, both from St Petersburg and Penza, which were identical down to the last comma: “It’s like when a judge allegedly receives a USB stick with a copy of an indictment on it, and the text is then copied into the judge’s verdict. It’s the same in this case.”

The prosecution’s final indictment says that Filinkov played the role of a go-between in the “Network”, and that he “took measures to ensure his own security, by using a pseudonym, ‘Gena’”. Cherkasov states that there is no evidence in the case file that Filinkov performed this role.

The case materials also state that Filinkov travelled from St Petersburg to Penza twice in 2016. According to the investigation’s version of events, this trip was part of a plan to enter into a criminal conspiracy with the other defendants and participate in training with them.

“Filinkov doesn’t deny that he travelled to Penza and made friends with people who share his worldview, but he says that he didn’t take part in any training sessions whilst doing this. His words are backed up by the case files: they contain no evidence of this,” Cherkasov explained.

Filinkov also confirms that he took part in a conference attended by left-wing youth at the start of 2017 in St Petersburg, which brought people from Penza, Moscow and Belarus. The investigators believe that conference participants planned to discuss how to destabilise the country in order to start a revolution.

The prosecution has no evidence of this, according to Cherkasov. Only documents from the investigator of the Penza group are included in the case file. This amounts to a description of the structure of the “Network” and the supposed agenda of that conference on A4 paper – a document which, according to Cherkasov, could not be presented as evidence:

“The provenance of this document, who created it and when, is not recorded in the case file. The document contains nothing to suggest that it is the rally’s agenda. It is impossible to determine that this text has something to do with my client and the other defendants in the case.

“If you remember, the FSB initially said that the ‘Network’ was preparing terrorist attacks for during the Football World Cup. This information is also not present in the case file.”

Cherkasov prepared an eight-page official request to the investigators, arguing that the case, as it stands, cannot proceed to court. He requested that face-to-face meetings be held with other defendants in the case – some of them have also stated that they gave false confessions during torture. The investigator immediately issued a refusal (according to Cherkasov, without justification) while Cherkasov was still in the room.

In January 2019, the first sentence in the case was handed out to Igor Shishkin, who made a deal with the investigators. The court proceedings were held under “special procedure”, which meant that the court did not examine evidence against the defendant. Shishkin admitted his guilt and confirmed everything that the investigators had written. He also testified against the other detainees and confirmed in court that he was prepared to do so again in the future. Cherkasov explained that Filinkov does not judge Shiskin for his actions:

“Viktor is unsure how he would have acted in Shishkin’s place, when his wife – these are the words of my client – was taken hostage. Filinkov’s wife turned out to be far away and they couldn’t get to her, but Shishkin’s wife was questioned by the FSB. My client understands perfectly that Shishkin’s testimony will have consequences for his fate, but he doesn’t hold a grudge against him.”

Finally, Cherkasov recalled the position of the European Court on Human Rights: that a court should prioritise testimony given during the court hearing, even if a defendant initially admitted their guilt. He added that Filinkov is currently in a good spirits and is ready to face a guilty sentence.