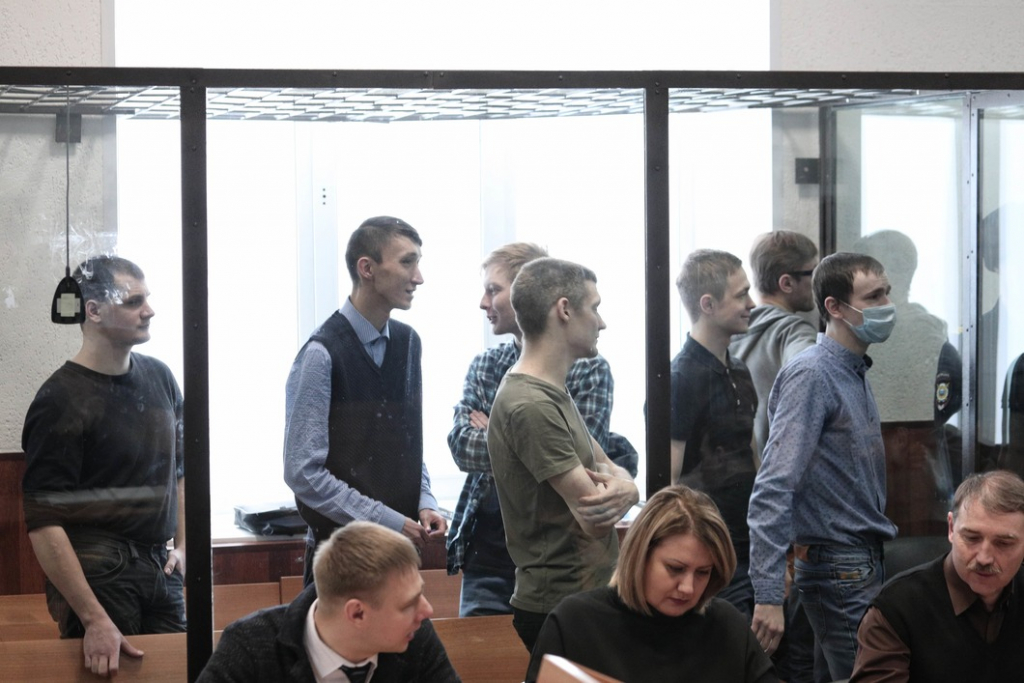 A Russian court has issued harsh sentences to seven antifascist and anarchist activists in a controversial domestic terrorism case marred by claims that investigators tortured the defendants to elicit confessions.

The court in Penza, a city about 390 miles (630km) south-east of Moscow, sentenced the men to terms of six to 18 years in penal colonies for allegedly forming an organisation called Set, which translates as the Network, which prosecutors said planned to carry out future attacks inside Russia to overthrow the government. The men were also charged with an assortment of weapons and drugs charges.

Influential human rights groups have called the case fabricated and said the men may have been targeted for their political activism. Four of the men on trial said they had been tortured with beatings and electrocution during the investigation. In December, Memorial human rights centre, one of Russia’s oldest civil rights organisations, had called for the charges to be dropped.

“It is obvious that the prosecution of the antifascist activists in Penza, part of ongoing repressive measures against anarchists and antifascists that sharply increased in 2017–2018, is politically motivated,” the organisation wrote.

On Monday, supporters of the men shouted “shame” at the Penza courthouse where the verdicts were delivered. The prominent opposition figure Alexei Navalny called the sentences “horrific.”

Oleg Orlov of Memorial said: “This is a monstrously harsh verdict, but we didn’t expect anything else.”

The prosecution accused the men of allegedly planning attacks, but gave little concrete detail about when or where they would take place. Investigators originally claimed that the men planned to target the 2018 World Cup or the presidential elections, but those charges were not reflected in the final criminal case.

The men had played airsoft together, an activity which the prosecution said was training for attacks. In 2019, the Network was named an extremist organisation, alongside groups like Islamic State.

“Even if these guys really did discuss a future revolution … crime starts when people make a particular plan, and they were not accused of making any certain plan,” said Alexander Verkhovsky, the director of Moscow’s Sova centre, which monitors extremism and the government’s countermeasures in Russia.

Four of the defendants said that they had been tortured during the investigation, accusing members of the Federal Security Service (FSB) of resorting to beatings and the use of electrocution to garner confessions.

Dmitry Pchelintsev, 27, an antifascist activist from Penza, was sentenced to 18 years in prison for allegedly creating the Network. He and his co-defendants have denied the group ever existed.

In testimony to his lawyer, Pchelintsev said that he admitted to planning terrorist attacks after being detained and tortured with electricity by security officers. He described clenching his teeth from the pain and his mouth being “full of blood”.

“They started to take off my underwear, I was lying facedown, they tried to connect the wires to my genitals,” he said in remarks published by MediaZona. “I started to scream and beg them to stop torturing me. They started saying: ‘You are the leader.’ To stop the torture, I said: ‘I am the leader.’”