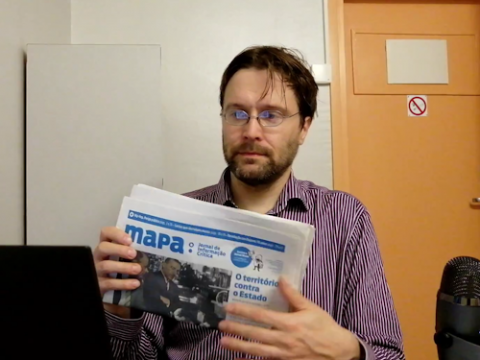 After the start of war in Ukraine we have seen several protests in different cities of Russia, which have led to many being detained. Now that five months has passed since the beginning, can you tell us about the resistance and the anti-authoritarian and anarchist action in Putin's Russia? How is it possible for that resistance to exist and to act, and how can we get insight and reports of the anti-authoritarian opposition from Russia?

Anarchists have been part of the general anti-war protest. On the first day of the war, anarchists marched at the front of two non-permitted demonstrations in Moscow. After the imprisonment of Alexei Navalny and the repressions against his hierarchical organisations, opposition has become more decentralised. Most important networks are run by feminists, such as Feminist Anti-War Resistance, or Human rights activists, such as Vesna (Spring) Youth democratic movement. Feminists prefer to organise in an anti-authoritarian manner, often without visible leaders, and some of them are inspired by anarchism.

Some anarchists concentrate on spreading anti-war propaganda and news, and by joining various less risky actions or projects that provide legal support against repressions. Others organise clandestine direct actions. Autonomous Action does the former, Anarcho-Communist Fighting Organisation does the latter. You may follow these activities from these websites, but for anarchists in Russia, and for the opposition in general, Telegram channels are the most important source of news, as the state failed to block access to Telegram.

We have understood this imperialist aggression of Russia against Ukraine as a sign of a ever-growing nationalist feeling in Russia. How do you characterise the nationalism in Russia and does it impose itself in the cultural diversity of the Russia Federation? And what is the role of the Russian far-right in it?

Russian ultra-nationalism has a long history. Ultimately it is rooted in the Slavophilia-movement of the mid-19th Century, which was part of the general tendency of romantic nationalism in Europe. Originally Slavophilia was a reform movement based around the Orthodox Christian religion, but when the Russian elite started towards the end of the century to bring its ideas within state ideology, it became more similar to modern ultra-nationalism. That is, repression of the language and culture of minorities, irrespective of their religion.

After the revolution the white emigre community synthesised these ideas with fascism and national-socialism, and unlike anarchists and socialists, they managed to maintain organisational continuity until the beginning of Perestroika with organisations such as the National Alliance of Russian Solidarists (NTS). In the Soviet Union nationalists started to re-emerge already in the 1950s, and in Perestroika times it quickly evolved into a flourishing ecosystem of nationalist publications, organisations and networks.

However, no dissidents ever came to power in Russia, and nationalist dissidents were no exception of this rule. Although the elite started to once again flirt with Slavophilia-concepts, such as Russian exceptionalism, already in the 90s, ethno-nationalists were directly antagonistic towards the Russian state, which they considered a multi-national mess ruled by disgusting red chekists. Nationalistic mass movements folded in the 90s, as they were not accepted to elections, and nationalists turned to terror. Worst year of nationalistic violence was in 2008, when more than 100 people were murdered in nationalistic attacks.

Soon authorities started to repress nationalists with a heavy hand, but the final blow to the ethno-nationalist radical opposition was the war of 2014. Nationalists were split, those prioritising fight for a homogenous ethno-state mostly supporting Ukraine, while those prioritising building of a new empire, even a multi-national one, supporting Russia (few hardcore Nazis also choosing Russian side). Nationalistic opposition has not recovered from this split.

Meanwhile, Putin and the Russian elite have moved towards a more nationalistic direction. For thirty years, Putin tried to stress that Russian identity is not dependent on language or ethnicity, but now he is waging war in Ukraine around exactly these issues. This is of course shifting the whole concept of Russia towards a monolinguistic ethnostate. There is already a backlash against this in the territories of ethnic minorities, and it will only grow.

Confronted with the imposition of war, how is the opposition to war in Russia coming to be? Is the burden of Russian victims and the loss of the supposed brotherhood with the Ukrainians already felt in Russian society?

I have not been in Russia for 10 years. I know what is happening, what are the actions and statements etc., but I do not have the general "feeling" of the society. Yet, I currently see some contradicting signals.

As in, one friend has said that she found St. Petersburg to be in complete apathy, when arriving there after being abroad during the first 4 months of the war. Not only are there no protests, but people are not even discussing the problem in the kitchen, which is a typical cliche from the Soviet times. On the other hand, there are also some new protest tendencies, such as the protests of mothers of disappeared soldiers.

Obviously the protest movement is having some sort of a lull, as people are exhausted, as well as disillusioned, after the first three months of protests, with more than 16 000 arrests in 70 Russian cities, seemingly made no impact. On the other hand, there are news of hundreds, possibly even thousands, of Russian soldiers refusing to fight in the war (which is in fact completely legal, as there is no war officially), so special camps are being set up to beat them into submission and to send them back to the frontline. Obviously, there will be a new wave of anti-war protests, which will not be "moral", but rather a reaction to material worsening of the situation in the home front, and deaths in the front. Already anti-war arson attacks against military and logistic targets happen with a steady pace in Russia.

We have seen different reactions within the leftist spectrum, and even with anarchists, towards this invasion of Ukraine by Russia, with some condemning it and others applauding it. How can you explain this divisiveness within this spectrum on a global scale, and even within Russian and Ukrainian societies?

Fortunately, I am not aware of any anarchists applauding the Russian attack! However, there are anarchists who want to maintain a position of ”against both”, even when this is completely abstract and without any concrete solution, as no-one is proposing some sort of Makhnovist fantasy suicide mission between two armies that would attack both the Ukrainian and Russian armies simultaneously. Instead of this kind of stupidity, Ukrainian anarchists are supporting efforts of their army to fight back against the Russian advance, and most of the Russian anarchists who still try to maintain some sort of struggle and not only ”research the history of the movement” etc, are supporting them in this – although not always making explicit public statements of this support, as that may have serious consequences for known anarchists.

The general discussion on what is wrong with the left would require not one, but several books. I think one of the factors is disillusionment on the outcome of the anti-colonial movements of the 50s-70s, due to which some have come to the extreme conclusion that national self-determination is a mistake, or at least that it is something that could be easily sacrificed for ”peace”.

Some are still afraid of nuclear war, which is a threat, but they tend to over-estimate the risk. Many are only able or willing to analyse the world from the context of their own national history. I understand that the USA and Nato are hardly a benevolent force from the point of view of Latin America, Italy, Greece or Yugoslavia. History repeats itself, but not every repeat is repeating the same story.

To be honest, after more than 100 years of anti-colonialist struggles, the left is still not having a very good understanding on what is colonialism, and what is not. In the history of the anarchist movement, there are also blind spots around this. For example, Spanish anarchists were not very interested about resistance being crushed at Rif, until they desperately needed more allies against Franco, by then it being too late. I discussed these issues in my earlier texts ”Why should we support Ukraine”, and ”Misconceptions about imperialism, and anarchist collective traumas”, but it seems like I should write even more.

After five months of war, things continue not to be clear regarding what will happen in the future. What do you think can be the future scenario on that region and do you think it's a plausible scenario that a drastic change in Russian society can happen?

On the other hand, if Putin manages to spin that he was beaten by an overwhelming, cunning and unfair coalition of Nato, perhaps people will only feel resentment against the West, instead of anger against their own leaders. So anything may happen. In Russia, you do not only know what will happen next year, you also never know what will happen tomorrow.