Stage Bottles: solidarity with the anti-fascists in Russia and in word and deed 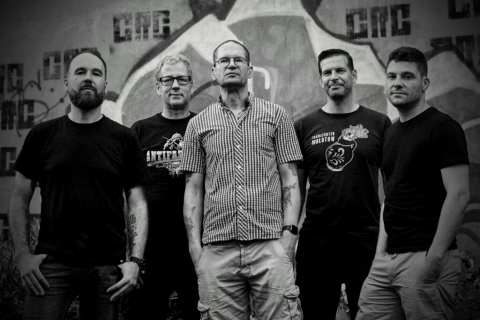 June 5, 2010 France passed a holiday in Paris branch of the National Confederation of Labour (CNT) - a red and black banquet and a concert by the German band The Stage Bottles. The team played very well, cheerfully and professionally delighted audiences such well-known things like «I May Be Impolite» , «Hooligan», «Sometimes Antisocial, Always Antifascist». Well, for the author of this article, as with any anti-fascist from Russia, had he / she were in my place, a song in the evening was a recent hit group - «Russia».About it and about many other things we talked after the concert and Olaf, vocalist and saxophonist Stage Bottles.

- Your song «Russia» in one day became a real hit among Russian anti-fascists. Probably nsluchayno its text was published on MySpace May 25, 2010, that is, after a couple of days after another Nazi killings in Moscow (May 22), which became the victim of Dmitry Kashitsyn. A week from the transferred shock his father died (29 May). The next day, May 31 in Ryazan was not Constantine Lunkin, attacked by the Nazis on May 23 its birthday.In those days, many listened to your song with the thought that it was written about us and for us, and found in it support. Tell us a little about the history of its creation.

- Two years ago we had a joint tour of Russia with What We Feel, during which we have an idea of how things work in Russia. Concerts are held in three cities: Moscow, St. Petersburg and Petrozavodsk.

To support and protect us arrived 20 friends from Germany, among whom was even champion in Thai boxing.On the Russian side was also 20 slides. So we went all together.

The first concert was in Petrozavodsk, where guys could announce it and paste posters, because the city is not a lot of Nazis. But even in Petrozavodsk, the day before our arrival, the walls were filthy swastikas (before the concert, they removed a). In St. Petersburg, had been taken safety measures are not worse than at the airport, you know, with such devices, which prevent the bombs and other rackets. Organizers of the concert in Moscow were forced to ask the police to ensure the safety of the hall, because it received threats and was not known how things can turn ...

I want to say that we are used to fight the Nazis - years of doing that - but that situation was quite different.We knew that the Nazis are going to attack us, can kill, because they are completely crazy, as in the song "Russia" - "no control, they're crazy beasts". Still fighting with the Nazis in Germany, England or France is in no way be compared with this ...

After this experience, we decided to write a song.Also, the reason was the one of the murders committed by the Nazis in Russia, I even remember what it was.

And ... the song is ready, recorded in the recording studio ... and again murder ... From the hands of neo-Nazis in Moscow killed Ivan Hutorskoy, Mean Machine ... Again and again this topic.

And now it all goes on and on, and we think that the lyrics «Russia» damn relevant. It is sufficiently emotional, you know, strong emotions, strong words, what is sometimes suffer antifashistkie songs about which you think that they are written solely to complain and tell everyone how hard to live.But when I listen to it now, I do wonder how it is, without exaggeration, describes the situation.

Such is the history of the song «Russia». Incidentally, it is a compilation in Canada, Germany and Russia, the money from which will go to the needs of Russian anti-fascists.

- You belong to any of subcultures?

- To be honest, I'm already 40 years ...Stage Bottles grown in skinhead culture. I am a guitarist, bassist and drummer - we no longer part of punk rock. The other guitarist is very tightly tied to football, and before joining Stage Bottles was one of the main "megaphones". Imagine 5000 people sing for him what he was singing into a megaphone. However, he was always anti-fascist.

Our friends - punks, football hooligans and skinheads, but who want them! We do not call ourselves Oi-team. We - a group that plays a street-punk and is on clear antifashistkih and critical social positions.If we say to myself: we Oi-band, it might alienate someone. And I like it when even the older women, such as today during a concert, just listen to us and smiling. And if you only eat that on Skinhead: "skinheads, skinheads, we are the best, we are stronger than all" - nonsense kind. I mean, in light Skinhead large enough. World - it is much bigger and more diverse.

- And how do you determine your political views?

- Previously, I was in the Trotskyist wing of the Socialist Party, I had this experience ...Well, is there its doorsteps ... They constantly talk about the revolution, as some anarchists, incidentally. But they are completely intolerant of other people. For example, they found someone with a different vzglyadavmi, and instead of respectfully talk, to show what he is wrong, to teach, they just say: "You're a goat!"

I sympathize with the anarchists, sotsilistam if they are normal. However, a suitable group for themselves and found nothing, and none of the Stage Bottles nowhere is.

- So what do you think need to communicate with carriers other ideology?

- Depends on who is in front of you.If it is violent Nazi, of course, you are not going to talk with him, and will respond adequately to the situation. But, for example, I have always been involved in football and continues to remain close to him, although I have, of course, not an active hooligan. That's where I met a lot of people, including the right. I spoke with them, and they have always understood that I was leftist.One right hooligan once said: "I always thought that all leftists muddle beard, and wear sandals. But you can fight. " Since then he has ceased to hate the Left, go to punk concerts.

I try to communicate with everyone, showing that there is another way to be against the system ("antisocial, but antifascist"). We must explain to the hooligans, avoiding bombastic rhetoric that if you lose your job, this is not to blame immigrants, and certain structures that we all have profited. And even if they do not become anarchists on the next day, but it is very important to try to talk with right-wing hooligans that they began to sympathize with the left and the anarchists.

And also very important to show that you are strong enough to defend themselves.This is a must when dealing with people who may be your enemies, especially with the right hooligans who almost always kontachat with the Nazis. It is necessary that they understand that you can stand up for themselves, that in this respect you may be a bit they do not back down, then potentially you can influence them.And probably no need to explain that under an hour of physical training depends on your life and health. Especially when the Nazis claimed that they had at your expense some plans ...

- Do you plan to return to Russia?

- Not so long ago it was suggested that a concert in December 2010. If the reliability of contacts is confirmed and if the organization of the concert will involve trustees, then again we will play in Moscow. We very much hope that all'll close. Even if the anti-fascist concert in Russia - is a risk, we can not sing about solidarity with Russian anti-fascists and the parties to this risk.

- This, of course, The Angelic Upstarts, with whom I play and who recorded the song "Solidarity".British group with strong anti-fascist positions Blaggers ITA, with them, I also play.

- Also, my favorite: Newtown Neurotics, Cock Sparrer, The 4-Skins, Los Fastidios, Brigada Flores Magon, UK Subs, The Pogues. So many, many others whose names I simply forgot.

- Want to say something to those who will read it?

- All the people we met in Russia were very nice and honest people.Every day, dealing with very difficult circumstances, they do not show off, not put it on display, such as many in Germany, they say, we are anti-fascists, we have such a hard life, but we takiie strengths and so on. For them it is just fine, usually - to do what they do, because that tells them to heart.

They continue to fight, knowing how much is actually the obstacles before them.After all, inter alia, anti-fascists in Russia today equated to extremists like the Nazis. And so they are being repressed and persecuted by the government and police. That is what has become one of the reasons for which the WWF was forced to cease its existence as a group. In the chorus of the song «Russia» is the line "Russian anti-fascists, to continue the struggle» («Russian antifascists keep the fight»), - an attempt to support you.But even if someone leaves in the shade and cease to be active because of the repression, we do not blame him / her. We, the people of Germany, simply did not have that right.

PS By the way, Stage Bottles, not only do not object, but will be happy if the song «Russia» will be translated into Russian for concert performances or for recording. Do not forget to send a link to the authors.