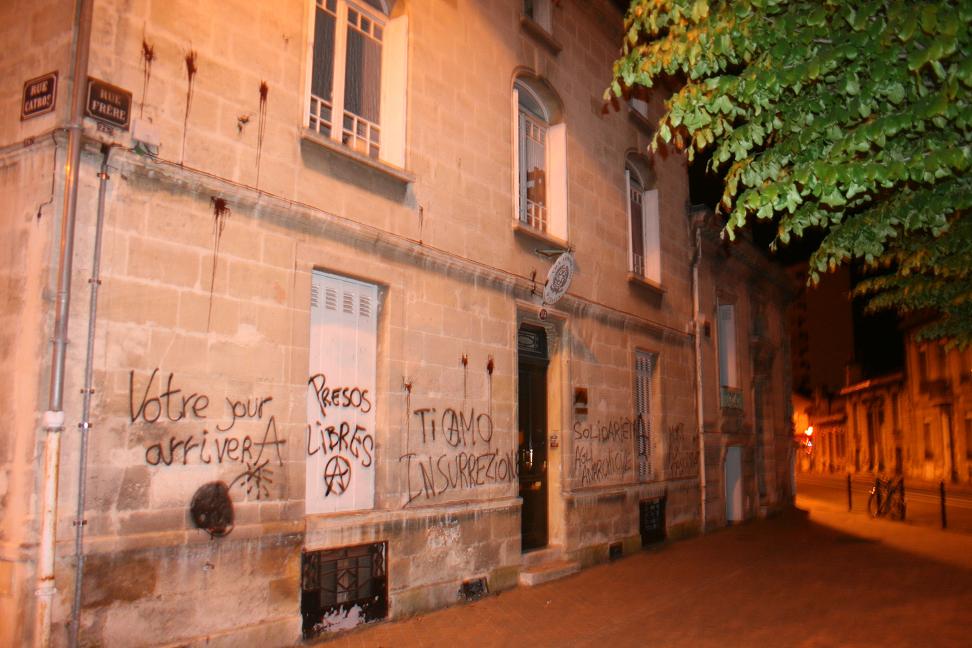 Blois. Morning of November 9, students of the Lyceum Dessen blocked chairs and chains of the two main entrance to the building in protest against pension reform. After negotiations, they agreed to put 7.15 in high school staff, but the administration deceived the students, taking advantage of this to open one of the inputs. Then she called the police. Although the blockade was peaceful, the police without provocation attacked the students, verbally abused, punched and threw them on the ground ... Grenoble. November 8, at the call of the general meeting of the fight, about 100 people gathered at the station and made an unauthorized procession with torches and the beat of drums.Passers-by handing out leaflets stating that the struggle continues, and general assemblies gather daily at 5 pm at the station. Chanted: "No negotiations of social retrogression, struggle against it by a general strike, direct action and sabotage". The reaction of passers-by as a whole was positive, motorists supported the protesters signals. November 9, after the blockade of several high schools of the city, at the call Mezhlitseyskoy coordination was conducted demonstration school and college students.The column with the participation of 200 people moved to Port-de-France. Rally was organized by filtration. The situation worsened when the get into a fuss driver ran over his leg one of the protesters. Someone from the crowd (not a participant in the demonstration) attacked the driver, and this incident was used by police to disperse the demonstration. Fleeing from the beatings, one of the protesters jumped from the bridge and was badly injured. There have been numerous beaten, wounded and detained. Video: http://www.youtube.com/v/gW2MxxtxHas?fs=1&hl=ru_RU The evening was a demonstration to protest against repression in the area of Charles de Gaulle.November 10 students gathered outside the hospital Mishallon in solidarity with the wounded. Le Mans. Morning of November 9 Dozens of schoolchildren blocked the Southern school and high school "Yourcenar". The blockade was stopped police commandos. Later, about 200 students were in the morning along the city streets, protesting against government policies. They blocked two railway tracks at the station of the city.The blockade lasted for several minutes and was symbolic, but deeply troubled by the security service station. Carcassonne. Returning from vacation, the students continued their blockade of the action schools. Lyon. Morning, Nov. 9 about 100 people (mostly students), blocked railway tracks at Perrasha. The blockade lasted for about an hour. Then part of the protesters marched to the University of Lyon 2 - Bronx. Kahn. November 8th general meeting of the university voted (180 - per, 154 - against) for the blockade of the 1 st campus, but strong enough to occupy only one of the buildings.The rally was held despite the threats of the Rector (a member of the Socialist Party) and the far-right militants. Morning of November 9 police expelled students from the building of the Literary Department. Moussy (Val d'Oise). On November 9, 13.20, 35 km from Paris train traffic was interrupted when a high-speed train ran into a piece of iron fittings. Tracks were damaged, and trains on this section did not go to 16.30. As expected, certain failures in the timetable are possible by the end of the week. Chambery.3 of young people who participated in the clashes after a demonstration on October 14, were sentenced to probation terms from 15 days to 3 months. Lorient. 20-year-old resident of the city appeared in court on charges of throwing stones at police during a protest on October 19. He was sentenced to 12 months' imprisonment and a fine of 1000 euros. SELF 2-I People's Assembly in Montobane collected after the demonstration on November 6, rated as a major success. It came in 6-7 times more people than the first.Brought together people of different professions, precarious and unemployed city dwellers and rural residents and even members of trade unions, is not subordinate to their leaders. The participants expressed their intention to continue the fight and to organize new protests. GREECE: SHARES OF SOLIDARITY November 6, in a nationwide day of protest in France, the Greek comrades in solidarity with the struggles of French workers blocked Athens department store Karrfur ", which belongs to the French capital. November 9 in Patras about 30 anarchists took over the French Consulate.The occupation lasted for about 40 minutes. http://juralibertaire.over-blog.com/