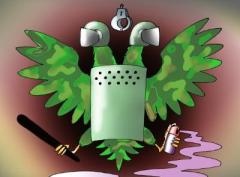 July 31, 2010 in Khimki, Moscow region town court considered material 2 offices 4 Department of Investigation of GUS in the police department in the Moscow region with an application for use on detainees July 29, 2010 Gaskarova Alexey and Maxim Solopovu as a preventive measure in the form of detention. Judge Galanova SBalthough it refused to apply such a measure, but the detainees from custody was not released. She decided to seek further evidence of the validity of the election of remand in custody, and the period of detention of suspects Gaskarova AV and Solopovu MV extended for 72 hours.

Purely legal, both detainees were to be released immediately. After all the evidence the need for them is the detention was not provided. But the court has not released them from custody. Moreover, the preliminary investigation of this sensational case has just begun, and already found a lot of fabrications and falsifications.I'd settle for one of the fraud, to which attention was drawn to the judge Galanova SB Since the grounds for detention Gaskarova AV and Solopova MV July 29, 2010 were not available, the investigator Rysin SV decided to make official forgery, pointing to the detention false information - allegedly Solopov MV was "caught committing a crime" (ie, when during the course of the attack on the administration building gor.Himki), and Gaskarov AVas a person "caught immediately after the crime" (that is caught in the crime scene immediately after its commission). This raises many questions of human logic: If the crime was committed in the evening July 28, 2010, why Solopov and Gaskarov were detained until 29 July? Because the crime did not last long, only 10 minutes (if you trust the prosecution's case). Why in the media officials said that all the assailants fled from the crime scene and no one in the next day without stopping?

The answer is simple: Solopova Gaskarova and detained as being once the anti-fascist movement activists, without any legal grounds for such arrest.And since Article 91 of the Code clearly indicate the circumstances under which the investigator has the right to detain a person suspected of committing a crime, then those reasons have decided to write without any proof, and told blatant lies.

That sounds like grounds for detention in the Code of Criminal Procedure: "Article 91. Grounds for detention of a suspect 1. The body of inquiry, an investigator, the investigator has the right to detain a person suspected of committing a crime for which he could be sentenced to imprisonment, if one of the following reasons: 1) when the person is caught committing a crime or immediately after its commission, 2) when victims or witnesses to point out that person as the perpetrator, and 3) when that person or his clothes, with him or his house will be revealed clear evidence of a crime.2. If there are other grounds for suspecting a person has committed a crime, it may be delayed if the person has attempted to abscond, or have no permanent residence, or do not have his identity, or if an investigator with the consent of the head of the investigating officer or investigator with the consent of the Attorney the court sent a request on the election in respect of the person as a preventive measure of detention ".

And it turned out that no one pointed to Solopova and Gaskarova as those involved in the massacre of the building administration gor.Himki, traces of the crime on them or in their home has been found, and that's decided to fabricate evidence that they were both detained in time of the crime.I specifically pointed out that such false entries in the court documents - is a crime, official forgery. After that head offices 4 2 Department of Investigation of GUS in the police department of the Moscow region Yermilov NO demanded in the courthouse that I signed to secrecy of data of the preliminary investigation, that is not to tell the media and other parties interested in the fate of the detainees that are present in the fabrication of materials.I refused. Judge asked to pay attention to the false information in the documents. However, the judge went ahead with further falsification of materials. She said in a ruling of July 31, 2010, allegedly carried out lawfully detained on the grounds specified in Article 91 paragraph 2 of Part 1 of the Code of Criminal Procedure (when witnesses will point to that person as the perpetrator). Thus, she pointed out the wording of disproving the case. Not to be unfounded, I decided to fully cite article 91 of the Code and add the scanned documents.

Watch and marvel at how irresponsibly mold materials criminal cases, investigators and judges! Clearly, these transgressions can not remain without reaction. Be written Nullification. However, there is no certainty that in the rule of law will prevail. Investigators must report the successful detection of the offense, but judges must have been instructed, do everything to facilitate planting. In such cases the law recedes into the background. Well, because the process took place in a closed mode on the public, Idecided to briefly show what mainstream considered the petition for application to Gaskarova and Solopovu detention.

Commentary on the first document: Grounds for detention Gaskarova AV: caught immediately after the crime.

Feedback for the document: The judge Khimki city court stated that the grounds for detention were the testimony of witnesses (which, incidentally, July 29, 2010 was not in the case file).