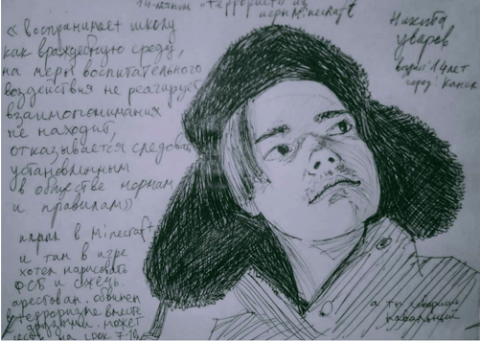 On Thursday, February 10, a Russian court handed down sentences for terrorism to three teenagers from the Siberian town of Kansk. The boys were arrested in the summer of 2020 for posting leaflets with political slogans on the local FSB building. After searching their phones and uncovering a “plot” to blow up a virtual rendering of an FSB building in the video game Minecraft, investigators charged the teens with making explosives and training to participate in terrorist activities. On Thursday, a military court in the Krasnoyarsk territory sentenced one of the defendants, 16-year-old Nikita Uvarov, to five years in prison. The two other defendants in the case received suspended sentences.

A Russian military court has handed down sentences for terrorism to three 16 year olds from Kansk, a town in Siberia’s Krasnoyarsk territory. The teenagers were tried on charges of making explosives and training to participate in terrorist activities.

Nikita Uvarov, who investigators deemed the leader of the group, received a five-year prison sentence and a 30,000-ruble ($400) fine, reported the head of the Agora human rights group, Pavel Chikov. The two other defendants in the case, who human rights activists have identified as Denis Mikhailenko and Bogdan Andreyev, were given three- and four-year suspended sentences, lawyer Vladimir Vasin told Novaya Gazeta.

The three teens were arrested in the summer of 2020 for posting political leaflets on buildings in Kansk, including on the local FSB office. The leaflets included slogans criticizing the authorities and expressing support for political prisoners, such as the defendants in the “Network” terrorism case and mathematician Azat Miftakhov. The boys were 14 years old at the time.

After detaining the teenagers, investigators searched their phones and uncovered messages about anarchism and experiments with pyrotechnics (Novaya Gazeta published a detailed report about the boys’ correspondence, available here). As Baza reported, the messages also contained a “plot” to blow up a virtual rendering of an FSB building in the video game Minecraft.

However, as noted by OVD-Info, the teenagers were not directly charged with plotting an explosion in Minecraft. Instead, investigators presented their correspondence — including the messages about the video game — as evidence that they were training to carry out terrorist activities.

In June 2021, FSB Director Alexander Bortnikov claimed that terrorists use the chat rooms of multiplayer computer games to recruit young people and involve them in “gameplay scenarios of committing terrorist attacks.”

Though Uvarov pleaded not guilty, the two other defendants in the case initially confessed and incriminated him. However, they later withdrew their testimonies. On Thursday, Uvarov’s mother Anna told OVD-Info that “confessions obtained during detention [played] the main role in the case, nothing else was proven.”

Uvarov spent 11 months in pre-trial detention following his arrest. After his release in May 2021, he was able to attend school and finish the year. Bogdan Andreyev and Denis Mikhailenko were initially placed under house arrest pending trial, but Mikhailenko ended up spending nearly 10 months in custody after officials from the Federal Penitentiary Service accused him of breaching the conditions of his house arrest by using the Internet. Andreyev and Mikhailenko were placed under less stringent measures of restraint (a “ban on certain activities”) in August 2021. Andreyev was allowed to attend school and use the Internet; Mikhailenko remained banned from accessing the Internet.

In his closing statement in court on Thursday, Nikita Uvarov said that should he receive a prison sentence, he would serve it “with a clear conscience and with dignity.”

“I’ll be calm, because I never taught my friends bad things, I wasn’t their leader, we were equals and just being friends. I didn’t incriminate anyone,” Uvarov told the court. “I wasn’t going to blow anyone up, I’m not a terrorist. […] I would just like to finish my studies, get an education, and go somewhere far away from here.”

How to donate for support:

You may also support via ABC Moscow, but you must indicate in your transfer either “Kansk case” or the name of a particular accused.