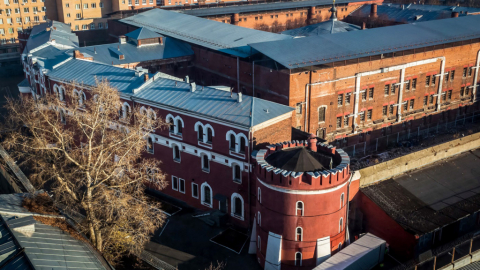 Vladimir Sergeev and Anton Zhuchkov were arrested in an anti-war action on the 6th of March 2022. Before his arrest Vladimir worked in a factory. Vladimir did not go to demonstrations before the war began. After the invasion of Ukraine by the Russian army on February 24, 2022, Vladimir's attitude toward the Russian state became even worse.

During an anti-war demonstration on March 6 in Moscow, Anton and Vladimir planned to use Molotov cocktails to set fire to empty detention buses, purposed for transportation of the people detained at the demo, then take a lethal dose of methadone and die.

But it happened that Vladimir and Anton were detained before their action. The police and national guard tried to prevent the demonstration as such, so they detained everyone on the way to the assembly point.

After the detention they found Molotov cocktails, but no methadone. Anton and Vladimir, realizing that they were going to jail and that they would now have no way of influencing the situation, took a lethal dose of methadone during their arrest.

However, the police officers noticed that the guys felt ill and took them to the hospital.

Anton and Vladimir spent about a week in the intensive care unit, and once they regained consciousness, they were arrested.

At first the guys were accused of preparation to "hooliganism". But the case attracted the attention of the FSB, and at the direction of the special service the charge was reclassified to "preparation for a terrorist attack".

Anton and Vladimir are currently held in the famous Moscow detention center "Butyrka," where many political prisoners are held. Anton has no family and grow up in institutions, so he has no family to support him.

You can help Vladimir and Anton through ABC-Moscow. Write us message by e-mail if you pass money for them.