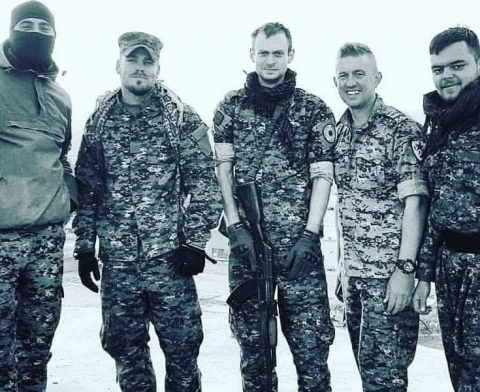 Greetings! Today is Sunday, June 12 - by the way, the so-called "Russia Day" - and we're continuing our podcast, Trends of Order and Chaos. This is episode 58. Here are the top stories on last week's agenda.

On June 9, the so-called Donetsk People's Republic (DNR) court sentenced to death three foreign nationals who are regular soldiers in the Armed Forces of  Ukraine (AFU). They fought against Russian aggression and were taken prisoner during the fighting for Mariupol. They are Saadoun Brahim, a Moroccan national, Sean Pinner and Aiden Aslin, British nationals. They were accused of "mercenarism, attempted violent seizure of power and being trained to carry out terrorist activities." At least they did not label a Maroccan as a Nazi.

There is a lot to be said for the insanity of this trial, even from the point of view of bourgeois law: how can one side try the soldiers of the opposite side for the mere fact of having taken sides in a war? We can also say that in the DNR, Russia (which controls the DNR completely) is simply testing the return of the death penalty. In Russia itself there is still a moratorium on it, but, as Vlad Barabanov correctly wrote in his Telegram Channel, after the Russian Federation leaves the Council of Europe there is nothing to prevent its removal. If, of course, everything goes well in Donbass.

But the most important thing is not even that: before moving to Ukraine, Aiden Aslin and Sean Pinner took an active part in the war against the Islamic State in Syria on the side of the Kurdish people's United People's Self-Defense (YPG). They are the ones in the title photo of this podcast. It's very symbolic. These people fought against the advancing obscurantism represented by IS fanatics - fought alongside Kurds who are building a society of solidarity and equality, building a real people's republic. There is much to criticize them for, it is not a hundred percent anarchist ideal, but still Rojava and other areas of Syrian Kurdistan are societies that much closer to it than any nation-state.

And now these people are fighting against Russian imperialism advancing on Ukraine. Against all the hell that accompanies the so-called Russian world: violence, authoritarianism, militant ignorance, patriarchy, isolationism. Ukraine, too, has much to be criticized for, of course, it is still a nation-state, a representative democracy with capitalism as its economic basis. But again, compared to today's Russian Federation, Ukraine is much closer to the libertarian ideal. Not surprisingly, it has people who participated in the Kurdish units fighting on its side.

What is symbolic here is that the fake "people's republic" is now trying to kill those who fought for the real people's republic. Lies are ordering the execution of the truth, the puppet fascist authorities are sending anti-fascists to be executed. We are not, of course, familiar with the political views of Saadoun, Pinner and Aiden (although many leftists and anarchists have fought and are fighting on the Rojava side). But in fact they fought an anti-fascist struggle. The real fascist in this war is the Putin government in the Kremlin.

Fortunately, the prisoners are not being sent to the firing squad right now - Putin will probably try to use them as a token to bargain for something. But the war has already brought to light the true nature of this regime many times. And bargaining for the support from people like Saadoun, Pinner and Aiden will not work for sure.

Freedom to all prisoners of the Kremlin! And let all the walls come tumbling down.

We didn't mention the word fascist for nothing when talking about the DNR. The so-called Donbass "republics" - are a project of Russia. And Russia is rapidly acquiring almost all the classic features of a fascist entity. Now there is a law that fines will be imposed for so-called LGBT propaganda, even if the so-called "propaganda" is directed at adults, not children (until now a law existed prohibiting "LGBT propaganda" among underaged). Then it turns out that even simply asking for alternative service (a legal possibility that conscripted men have in Russia, to do civil work instead of being sent to army service) because you are against the war already discredits the Russian army.

Savely Morozov from Stavropol showed up at military conscription office at the region where he lives and asked for an opportunity of the alternative service. He said:

"I consider human life immeasurably valuable... I mentioned that my mother survived the [Chechen] war in Grozny, she was under shelling for about a month, survived by a miracle, gave birth to me at a late age, and I don't want to put my life in danger."

A policeman was present at the commission for some reason. He drew up a report on Savely for "malicious violations, which fall under Article 20.3.3 of the CAO RF". That is, to speak against the war (even an abstract war, not a specific one) is to discredit the RF Army. It is roughly clear what is the purpose of such an RF Army in such a case. What every normal person, let alone every anarchist, should do with such an RF Army is also clear.

Help those who are against the war

In Russia, military conscription offices burn, anti-war graffiti appears, and other mysterious events take place. More often than not, all the participants take the necessary precautions and the repressive organs of the state are left with nothing. But those where captured by the cops need your help.

The other day, the whereabouts of five more people involved in anti-war cases became known. Now you can write to them. These are Denis Serdyuk, Ilya Farber, Yegor Kazanets, Bogdan Ziza and Dmitry Ivanov.

Write them letters, support them in other ways!

Celebrate June 12, the day of Russia's imperial ambitions, by anti-imperial means! The range of possibilities is wide: from anti-war paper airplanes to sabotage of the war machinery. Sabotage of all kinds, metaphorical and not so metaphorical.

Our strength is in solidarity and we are the future! Behind the Kremlin bureaucrats and vigilantes in uniform there is nothing but fear and degradation.

Well, that's all for today!  Recall that in "Trends of Order and Chaos," members of Autonomous Action give anarchist assessments of current events. Listen to us on Youtube, SoundCloud and other platforms, and visit our website at avtonom.org!