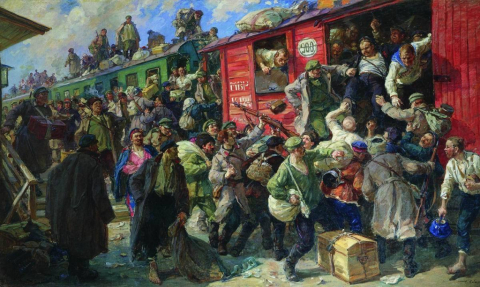 Hi everyone! Today’s September 19 and we continue our podcast of “Trends of order and chaos”. This is episode 72. These are the main topics on pat week’s agenda.

This week the war has exceeded 200 days. Putin failed in making it a light war “with little blood on foreign territory”. As tele-propagandist Simonyan was once entertaining herself “In a real war with Ukraine, we will win within two days. God, what’s there to win? I mean, it’s Ukraine, we can crush those fire emplacements, this is what we were discussing during the commercials.” Now, a Russian blitzkrieg has failed. Instead, we have a Ukrainian breakthrough on territories occupied by Russia and their recapture from enemies up to the borders of Belgorod Oblast. Russian propaganda didn’t recognize the defeat. It turns out, this was a purposeful maneuver and everything was doing according to the plan. “To achieve the stated goals of special military operation on the liberation of Donbass, a decision was made to regroup Russian forces, located in the areas of Balakliya and Izyum, in order to increase the efforts on Donetsk direction.” (from telegram channel of RF’s Ministry of Defense). Namely, it was a kind of “negative advancement”. An increase of efforts on speedy skedaddle, sort to say. Channels of Russian patriots, supporting the war against Ukraine, were howling about how is that possible? “Our people” are there! “We don’t abandon our own!” As if they forgot, that what A. Babchenko was right about is that “Motherland will leave you behind, son. Always”. Therefore, all of you “we can repeat it”-patriots, all this time you were supporting a lie, that was emitted from all propagandist directions, now you suddenly want the truth? The actual truth? Like, honestly? From whom? From the ministry of defense, that hesitates to call the war, war? Perhaps, from journalists that could be put behind bars for any “wrong” word? Maybe from bloggers, who were equated to media, and can get the respective trip to jail? Therefore, reap what you yourself helped sow.

We have already talked about the fact that suffering and death, seems to be the national idea of the “Russian world”, and that it carries it along anywhere it tries to spread. After the liberation of villages and cities from Russian occupation, they find prisons with torture chambers and numerous graves, in part of which they find people subjected to torture by the invaders. It seems that the only motivation occupants had was the opportunity to torture, kill and loot. The moment they were rebuffed – the motivation evaporated. They didn’t expect the rebuff, didn’t count on a counterattack. The whole hierarchical system of Russian army, built - similarly to anything else in Russia - on “power vertical” and fear of the authority, turned to dust. The colossus of Russian army - the second in the world in terms of quantity and armament – resulted to be on feet of clay. Of course, it’s still early to celebrate a victory over it. And the price, paid for its each step, is high. Including the blood of our anarchist comrades fighting against the fascism, that Russian occupiers carry with them. But we can now see that the devil is not as scary as painted. An agonizing Russian empire, in its current variation, is not as strong. And its Achilles heel is precisely the fact that it is built on lies, violence, obedience and fear. It increasingly resembles a dinosaur that has his half body bitten off, but that fact hasn’t reached his brain yet.

3. Who will be thrown into the furnace?

At the same time, due to major loses, Russian army has to replenish reserve with so-called manpower. But, as we see, Russia’s population seems to lack motivation to fight in Ukraine. Particularly, after current losses and lies about the retreat. Government is clearly scared to announce mobilization. Well, firstly, what mobilization, if there’s no war? It is a “special operation”. Secondly, the government clearly fears its own people, and subsequently, dreads to give them guns. What if they start rebelling? Here we also have a defeat at war, that in the case of Russia-Japanese war resulted in the first bloodily suppressed revolution - a forerunner of the second in 1917, when the mobilized already had guns, military experience, lack of any fear and more than enough anger against the “traitors on the stuff”. Most importantly, after “Bloody Sunday” the tsar and his power lost their sacredness. Therefore, maybe someone in Putin’s cabinet learned to read actual historical books and not only Dugin’s inventions. Also, where will they find people? Who will be thrown into the furnace of the war? The government doesn’t hide any more that they are recruiting criminals in their paramilitary groups, including those convicted for murder and robbery.

Anarchists are against prisons and the penal system that exists in Russian. Yet, a reasonable question arises: if now murderers can continue to kill – it’s just that now they will be paid for it, as long as they kill on Ukrainian territory – that means that Russia’s worst enemies are artists, journalists and bloggers? Any honest person, who will write about the truth, can be repressed. Although…they have started to throw in fire the repressive apparatus as well, as it is already happening with some units of Rosgvardia – created to fight protestors inside Russia itself. Well…let them burn in hell?.

It’s difficult to predict if mobilization will be announced, but in any case, check the resources that advice on how to avoid being drafted, also on how to protect children from brain washing with fascist propaganda, and other, helpful to you but very harmful to government, advice. While, you can find advice of history in every textbook of senior classes.

4. And on noble robbers

Talking about history, it seemed that the times of noble robbers and turbulent expropriations, have long gone. Yet, this week news came from Lebanon. There, a woman took over a bank, demanding the money needed for the treatment of her seriously ill sister.

The thing is that the money belonged to her sister, but Lebanese banks have frozen dollar accounts due to shortage of cash. Now Sally Hafiz is a national hero. Because people love justice and hates the opposite.

To the question, so now anarchists propose the return to times of bank robberies, we answer that anarchists propose a step forward, into new times, where a person’s life doesn’t depend on banks, government and their territorial conflicts, like it did this week in yet another border conflict between Azerbaijan and Armenia, and Tajikistan and Kyrgizstan. As, anarchists propose the building of a classless and stateless society based on self-governance and mutual aid. This is what 21st century must be remembered for.

The episode of No.72 was prepared by Nina T.