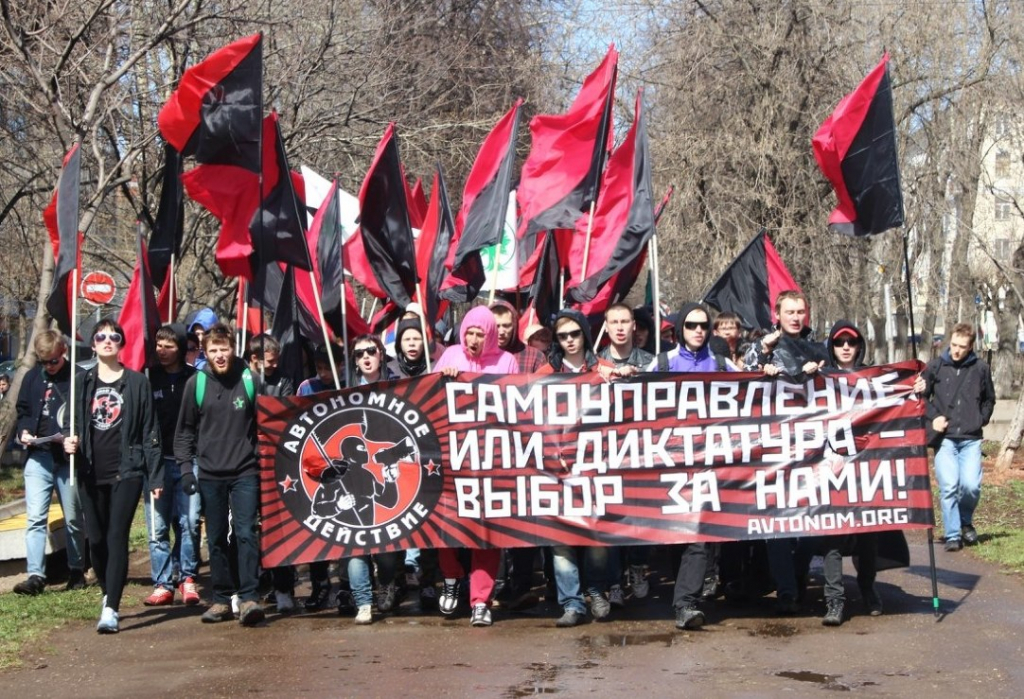 Russian authorities have upped the ante in their pressure on anarchists from “Autonomous Action” movement as of late – this includes a new prisoner charged with the Bolotnaya Square case, Dmitry Buchenkov, and an antifa activist Alexei Sutuga. The Insider found out why the Kremlin is all rage against the leftist anarchists, and we also talked to Sutuga’s mother.

A new figure appeared last week in the Bolotnaya Square case: Dmitry Buchenkov, Ph.D. in political science, docent in the Russian National Research Medical University named after N.I.Pirogov (the so called 2nd Med) was arrested charged with a standard set of accusations used in the May 6 case. Buchenkov was allegedly bashing coppers and participating in the riots. Buchenkov himself is maintaining that he was absent from Moscow on May 6, 2012, during the riots. He was travelling by car, coming back from his parents’ house in Nizhny Novgorod.

Buchenkov’s arrest was different from the vast majority of other arrests related to the Bolotnaya Square case. For several days neither his family nor his lawyer were advised of his whereabouts. The Public Monitoring Committee (PMC) found Buchenkov in a temporary detention cell at Petrovka 38 well-known for pressure exerted upon arrestees. Buchenkov told Zoya Svetova, PMC member, that he was not beaten, but he was threatened with violence should he not «confess».

Buchenkov is known as one of founders of the «Autonomous Action» movement. Simultaneously at the other end of Russia, another «Autonomous Action» activist Alexei Sutuga doing time in the corrective labour camp No.2 (CLC-2) in Irkutsk Oblast was transferred to a solitary confienement cell.

note) think that Sutuga is one of Russian antifa leaders. Sutuga is serving his thirty seven months sentence for a fight against nationalists. He does not admit his guilt: according to him, he was simply present in a bar where the fight took place. Nobody suffered any bodily harm, the Sutuga case is entirely built upon statements made by his ideological opponents. The human rights organisation «Memorial» regards Sutuga as a political prisoner.

The solitary confinement for Sutuga means that his imprisonment regime may be toughened and he may be sent away from Irkutsk Oblast to remote camps without any human rights activists around.

The Autonomous Action was cited more than once by Ilya Goryachev (recently sentenced to a life in prison for his role as a founder of the Militant Russian Nationalists Organisation) in his analytical notes prepared for law enforcement authorities and the presidential administration. Goryachev believes that the Autonomous Action – «is an important link in the anti-Russian complot chain». The leftist complot is supposedly being prepared by such MPs and politicians as Ilya Ponomarev, Oleg Shein and Heydar Jamal, whilst a role of “infantry” for the “red revanche” is reserved for the Autonomous Action.

This bizarre concept has not died out with the sentence pronounced against Goryachev. The Insider mentioned that his long-time colleagues Yevgeniy Valyayev and Stanislav Byshok keep working as analysts in the «People’s Diplomacy» foundation receiving multi-million presidential grants from the Civic Chamber.

Goryachev’s ideas about the Autonomous Action were reproduced in their entirety by Valyayev and Byshok in their recent report. According to Maxim Solopov, RBC reporter writing about law enforcement authorities, this report is used as a guidelines doc in the Ministry of the Interior.

In late October the People’s Diplomacy received a new presidential grant: 3.5 million RR for studies of foreign organisations activities in the post-Soviet area.

Olga Sutuga, mother of the political prisoner, professor in one of Moscow’s Universities, told The Insider about some consequences of such analyses.

— What is going on now with Alexei Sutuga?

— He has one year and five months of his sentence left to do. I am not allowed to visit him. They say he is socially dangerous. Murderers on their life imprisonment terms do receive family visits… He doesn’t – because he’s dangerous. This is what the camp head told the lawyer. Nevertheless, I will of course soon travel to Irkutsk and seek an opportunity to visit him – last time I saw him was in spring.

For many months my son has not received any letters or newspapers we send to him. Recently he ended up in a medical unit and diagnosed with acute arthritis. They gave him some pills and then just threw him out to his cell without continuing his treatment.

He has just received 10 days of confinement in a punitive isolation cell. The lawyer is clarifying the reason why, and then we will appeal against this measure. We are preparing a complaint about conditions he is held in – although the majority of such complaints is being ignored by the wardens.  The authorities have just declined our complaint about his transfer to such a faraway prison (Sutuga earlier lived in Irkutsk, but now his permanent residence is in Moscow – note of The Insider).

— How many times he was subjected to solitary confinement?

— In the CLC-14, where he was first convoyed, he would live in a common barrack, he would be able to walk around the camp, and work. In the CLC-2 he is held in a cell. It’s like in a remand prison: a one-hour walk, a closed cell for four. There have not been any conflicts with the fellow inmates so far.

— It was in spring 2015. He started being accused as soon as he came to the CLC-14: first they planted a chib knife among his belongings, then he was punished for sleeping in the daytime, for not making his bed, for a chevron torn off etc. Five-six of such breaches, one after another. He stayed locked in the solitary confinement cell all the time. On March 20 he moved to the CLC-14, on May 20 transferred to the CLC-2. In the beginning there was even an intention of locking him in a solitary confinement cell for one year, but then they gave up this idea after human rights activists started talking out loud about it. And now it’s the first time he gets solitary confinement in the CLC-2.

— He could be transferred further up North, or to some Siberian central prison, where he cannot be helped. Human rights activists dealing with prison problems are quite strong in Irkutsk. The local PMC is interested in his case, he gets visits from them once every two months. On the 18th of each month there are pickets in Irkutsk, where different problems of the Federal Penitentiary Service are discussed, including my son’s case. More and more people participate every month. When Alexei was first transferred to Irkutsk, it was a surprise for secret services that he got so much support here.

— What’s the purpose of pressurising your son?

— Make his life harder. He’s been under pressure ever since his arrival in Irkutsk. When he was convoyed to the Irkutsk remand prison, he was offered to do his time overthere, working in services, with a prospect of getting release on parole, but there he would be under control. When he refused they locked him in a «torture cell». Three inmates would not let him sleep taking turns: no violence, only talking all the time, trying to provoke him to get aggressive. He went on a hunger strike, after which he was transferred to the camp – that’s what he actually wanted.

Maybe they want him to testify against somebody. While he was still in Moscow, he was often visited by agents who were asking him all sorts of questions about his comrades.

— We heard they wanted to videotape him saying he was giving up his views.

— They want to break him at the very least, so that he would stop his activities when he is released.

— Has the information that his presumed victim is collaborating with the “E-centre” been confirmed?

— Yes, Rustam Mirza is a witness in other cases against antifa. Perhaps, it was a coincidence that Sutuga and Mirza found themselves in the same bar, but the E-centre profited from this situation to lock him in.

— What I can’t get about this whole case is the victim was examined by medical experts and just two bruises were registered. Why then the investigators and then the court insisted that Sutuga kicked Mirza, beat him with a chair and a hammer more than thirty times?

— What’s the significance of guarding a political prisoner for the local prison chief?

They are scared. They don’t know what to do.  I told «Open Russia» reporters about the solitary confinement in the CLC-14. The camp chief complained about it to our lawyer. I had to pass several documents for signing to my son – for instance his consent for his wife’s residence with their little son abroad. I was leaving Irkutsk on the following day, and the chief said he would consider this within one month. I said I would complain to journalists again. As a result, the prison administration were signing papers long after COB, they held a secretary till late hours and she kept constantly receiving angry calls from her boyfriend.

—  How can you compare the condition of ordinary inmates versus political prisoners?

— Difficult to judge – I am only in contact with relatives of political prisoners. Anybody who is inside must suffer. The way in which an ordinary prisoner survives depends a lot on his human qualities. The political prisoners are being constantly pressurised by police. Or else they try to break them.

— What would you advise to people whose relatives are imprisoned for their politics?

— One should realise that they will stay locked, no matter what you undertake. But one should constantly cooperate with human rights activists, reporters, try to change something. A lawyer with an expertise in political cases should be hired. Another type of lawyer might do nothing at all or even collaborate with police.

You shouldn’t keep silent. The more you keep silent the worse his situation will be. You shouldn’t be ashamed of having a relative inside – there are so many innocents doing time. When you do something you can at least feel that you are not indifferent. Otherwise how can I look in my son’s eyes, once he is released? Like I’ve preferred to do nothing while they did everything to break him?