"Cops - to space!" 2, 5 years from the date of Sokolnichesky events

October 4, 2010 coincided 2 dates: 53 years ago was launched into space the first artificial satellite, 2, 5 years ago, employees of the Moscow police department Sokolniki attacked a group of non-formals. 7 of them were detained and beaten in the department. One of the battered, Seva Ostapova, Transfiguration inter-district court awarded one year suspended for alleged attack on a policeman's Sokolniki. While 20 witnesses for the defense argued that it was exactly the opposite. The criminal case against the policemen themselves openly in the 4 th time, but the Transfiguration interdistrict prosecutor's office has not brought in for questioning any of the employees of ATS Sokolniki.The trial of Ostapova held under the constant talk in the press on the reform of the police. However, reports of police lawlessness in the same press have not diminished.

Participants of the rally on Oct. 4 from the Movement against police lawlessness and the Committee for the Liberation of Khimki hostages launched a radical proposal to reform the police: cops - to the astronauts! ".

Of course, the protesters could not bypass their attention and another topical issue in recent months: the illegal arrest of Alexei Gaskarova and Maxim Solopova on charges of mayhem Khimki administration.Despite the lack of evidence, in late September, a judge of the court Khimki Galanova Kudryavtseva and prolonged arrest guys for another 2 months.

In action on Oct. 4 brought together about 40 people. They chanted: No Police Lawlessness, "" Our militia have saves, first planted, then the guards "," Cancel Ostapova sentence, "" Freedom Khimki hostages, "" Swimming Pool "Sokolniki" for monthse Department of Interior "," Freedom of community advocates, "" Shame Khimki court, "" Shame on the court Transfiguration "," No to fascism, not capitalism, "" Freedom Sergei Mahnatkinu "and other slogans.

Participants of Autonomous Action, participated in a demonstration, distributed issue of "Situation", dedicated to Khimki hostages.

Shortly after the rally started her anti-fascist parties have noticed a large crowd of neo-Nazis around the venue of the rally - on the square near the monument Griboyedov and alleys around Chistoprudny Blvd.Safely leave the rally was just all together and, after standing at attention at the scene a few groups of anti-fascists - to create an impressive crowd.

It is noteworthy that in early August, the neo-Nazis have attacked members of one of the pickets in defense of Khimki hostages. That action also took place at the monument Griboyedov. 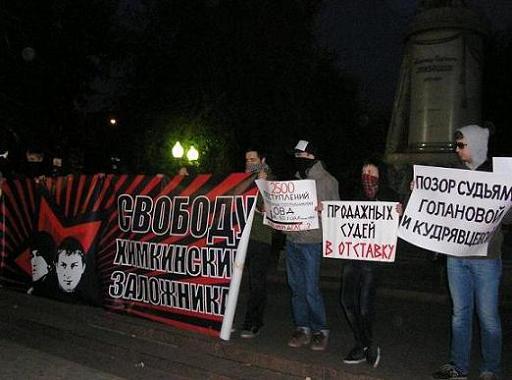