Day of solidarity with Russian antifascists 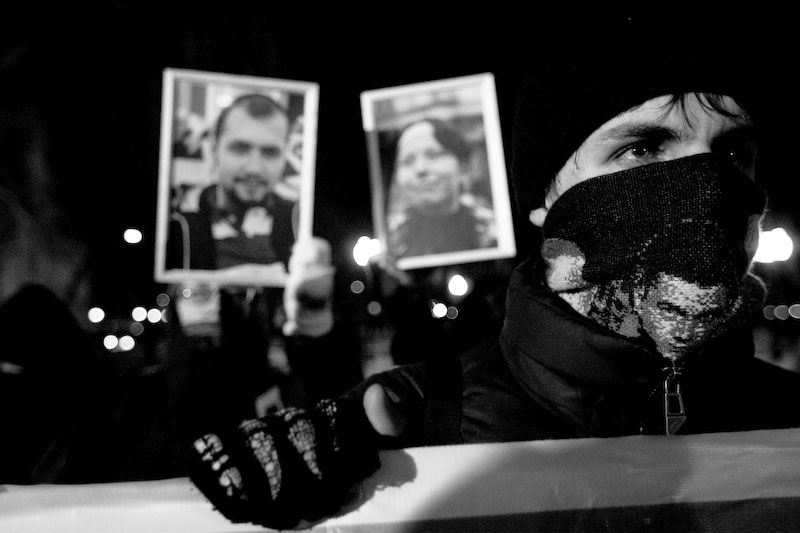 Sad anniversary two days ago, 19th of January, became biggest manifestation of solidarity with Russian anti-fascists ever – actions were organised in more than 30 cities in Russia and around the world.

Much has happened during a year, in beginning of November Russian police arrested two suspects of the murder of Stanislav and Anastasiya – Nazi activists Nikita Tikhonov and Yevgeniya Khasis. Little is yet known about the evidence against the two, but amongst Russian anti-fascists there is a wide belief that double murder was indeed work of Nazis, although not necessarily by the two alone. Tikhonov was a successful right-wing journalists and political spin doctor, before an arrest warrant was issued against him in August 2006 for organizing murder of anti-fascist Aleksander Ryukhin in April 2006. This arrest warrant was much due to efforts of Stanislav Markelov, and Tikhonov was forced to go underground against his personal will – thus he had both political and personal issues with Markelov.

It is indeed a good question, how come Tikhonov could live freely with his girlfriend Khasis, and keep murdering for more than three years, stockpiling firearms and 17 000 dollars of cash from unclear sources, while his girlfriend was a visible Nazi activist, monitoring courts of murderous Nazi gangs for Nazi “human rights” organization Russian Verdict (http://rusverdict.livejournal.com/). Tikhonov was a co-founder of “Russkiy Obraz”-paper, which later developed to an organization which has lately cooperated with pro-Kremlin “Young Russia” youth organization, premises of which were attacked in November after murder of Anti-fascist Ivan Khutorskoy (https://avtonom.org/en/node/5277).This is a fertile ground for conspiracy theories, however main thrust of the demonstration in Moscow, organized by “19th of January committee”, was against Nazis, not against government authorities who obviously at least underperformed during search of Tikhonov.

Thus attempts of authorities to suppress protests seem rather irrational. However one must understand, that in Russia any autonomous political activity is heavily discouraged and repressed, even when it is not directly against government authority. And as 19th of January proved, anti-fascism has become a significant and independent political force in Russia.

Website of the committee, http://19jan.ru/ was under a constant DdoS attack in prior to action, government tactics usually organized by using proxies such as Pro-Kremlin Youth organizations. There was a constant flow of false provocative statements, disinformation and mudslinging, coming from “informational agencies” linked to internet activities of “Anti-Extremist Center” of Russian police. And most importantly, Moscow authorities banned protest march and allowed only two pickets, for a maximum of 50 persons both.

Demonstration was endorsed by a number of Russian celebrities, of whom perhaps most famous abroad is science fiction author Boris Strugatski. Full list of endorsers is available here: http://19jan.ru/aktsiyu-podderzhivayut. Politics and tactics of the committee is an issue of ongoing discussion in Russian anti-fascist movement – for example few days before the action, Belorussian anarchists    published a statement (http://www.ainfos.ca/en/ainfos23519.html), which criticized apolitical analysis of the committee,  which did little to point out to  roots of fascism in capitalism and hierarchical worldview. It is obvious, that no political force should “monopolize” memory of Markelov, who hold anti-authoritarian leftist views but worked with a wide variety of persecuted Russian opposition from Chechens to pro-western liberals and Stalinists. In another hand, decision of January 19th committee to ban political symbols in Moscow demonstration created an impression of a certain unity instead of a pack of marginal sects. In other hand, although Committee was totally anonymous and held all press conferences wearing masks,  faces of political celebrities (from liberal Yabloko party, Stalinists and human right NGO's) who joined demonstration were of course prominently shown in media, whereas anarchists and antifa do not have individuals who are brands in themselves. It is little doubt that anarchists and other radical antifascists in black bloc dress code were the biggest single group in the Moscow demonstration, perhaps half of the original crowd of more than 800. This does not sound like a big number in a city of 10 million, but as a matter of fact it was amongst the biggest oppositional demonstrations of the recent years, next only to Nazi demonstrations of 4th of November and 1st of May and 7th of November demonstrations of the Communist Party. One should also take in account that confrontation (with both police and Nazis) was to be expected, and that it was a working day with a cold weather down to -20 C (-4 F), all factors decreasing turnout.  But whatever there are issues with politics of the coalition, in terms of turnout and level of confrontation 19th of  January demonstration was a success in Moscow.

Around 7 PM 19th of January, people started to gather at Petrovskiy boulevard, a section of “Boulevard ring” in center of Moscow. People formed a long queue, as police searched everyone joining the action. As loudspeakers were banned, little was heard of the speeches. Police had allowed “passage” from this picket to the next at Griboyedov statue next to Chistye Prudy metro station, however any slogans and banners were banned. Demonstrators had no intentions to follow these orders, thin police lines were promptly broken and a group of around 200 demonstrations went to move down the boulevard, scanning “Alerta antifascista!”, “Get to the streets, reclaim the city!” and “ACAB!”. In the front banner, there were names of dozens of Nazi victims of the previous years. However due to bad coordination due to inexperience of good part of the participators and lack of loudspeakers, remaining crowd of 600+ was isolated from breakout group, and they were only let out from the police cordon with small groups of 50 persons.

In Trubnaya square, breakout crowd ran to hundreds of OMON and regiments of Army of Interior in  riot gear.  (In Russia there is a 200 000 strong army not controlled by the ministry of defense but by the ministry of interior affairs, they have their own aviation, tanks and artillery. Back in the days it was under command of NKVD and responsible for guarding GULAG system). This was an unequal match and banners were unrolled, however cops were already pissed and they grabbed some people.

Eventually police managed to separate marchers to smaller groups, and rest of the march towards second picket was rather uneventful – small groups tricked towards Chistye Prudy and occasionally scanned slogans. There security group of the demonstration ran to badly disguised Nazi scout, who was promptly taken to hostage for the rest of the action. Nazis threw some smoke bombs and firecrackers to the crowd, but in general, unlike cops, they had little success in sabotaging action.

Original purpose was to screen speech Stanislav made in a demonstration in November of 2008 in Chistye Prudy (available here: http://www.youtube.com/v/oNojZ5hh03Y) , but police arrested projector,  screen and the sound system. Thus committee decided to read out their statement, wearing masks – police did not liked this, and in middle of the speech they interfered, attempting to grab megaphone and speaker. In the following confrontation, speaker was dearrested but crowd got furious, and an attempt was made to organise an illegal march by the boulevard towards Kitay Gorod metro station. Hower this was cut short by OMON after 200 meters, what followed was a melee of truncheons and gas in another side and snowballs and ice in another. More people were grabbed, putting a number of overall arrests to more than 50 – however crowd refused to disperse until everyone was to be released, and most of the people were released soon and everyone during the same night, most were filed misdemeanor charges but no felonies.

More early during the day, while crowd was gathering at Petrovskiy Boulevard, a group of autonomous anti-fascists attacked house of Russian Union of Writers with stones and smoke bombs. In a leaflet which was left at the spot, it was explained that house of Union was targeted as it had several times provided premises for benefit events of Nazi organization “Russian verdict”, which supports Tikhonov and Khasis and such Nazi serial killers as Arthur Ryno and Pavel Skachevskiy, who recently confessed random murders of 20 migrants in Moscow. This anonymous group uploaded a statement to indymedia (http://ru.indymedia.org/newswire/display/23252/index.php), where it explained that “goal of the action was to cause material damage to house and thus it was non-violent”, in good traditions of Russian insurrectional pacifism. 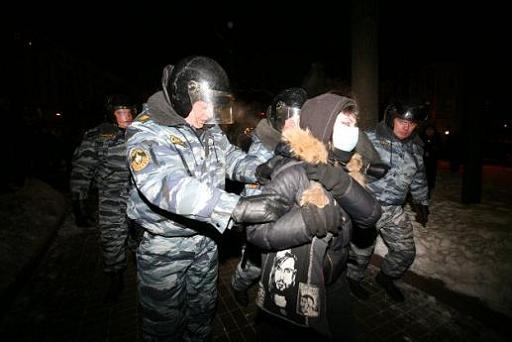 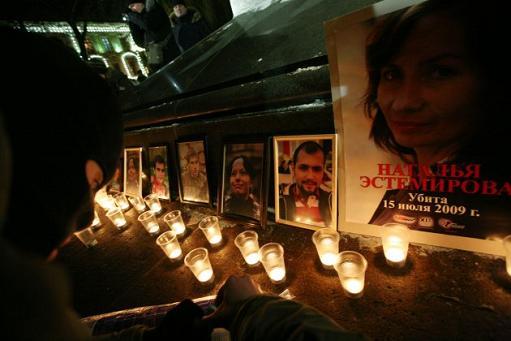 There is a huge amount of photos and video footage of the Moscow events online, perhaps most comprehensive video is this by grani.tv: http://grani-tv.ru/entries/1002/

Short summary of actions in other cities

Anti-fascists gathered at a memorial action in eternal fire.
http://ru.indymedia.org/newswire/display/23230/index.php

A banner drop in one of the main streets
http://www.avtonom.org/node/6917

A photo exhibition and presentation was organized.
http://www.avtonom.org/node/6937

A banner drop at the central park.
http://ru.indymedia.org/newswire/display/23220/index.php

Anti-fascists gathered at the memorial of victims of political repressions.
http://ru.indymedia.org/newswire/display/23260/index.php

Around hundred people gathered at a memorial picket to Freedomsquare http://ru.indymedia.org/newswire/display/23257/index.php.

Anarchists and anti-fascists made a memorial wall in metro:
http://ru.indymedia.org/newswire/display/23243/index.php

60 people gathered at memorial event and were harassed by cops
http://ru.indymedia.org/newswire/display/23232/index.php

30 people gathered at a memorial event in victory park.
http://ru.indymedia.org/newswire/display/23225/index.php

19th of January there was an illegal street exhibition organized at the outer wall of museum of political history (http://avtonom.org/en/node/6907). 20th  of January anarchists and other anti-fascists organized an illegal demonstration at the Marat street (http://piter.indymedia.org/node/8958).

A banner drop at the Mogilevskaya street
http://ru.indymedia.org/newswire/display/23218/index.php

Leaflets were spread and banners dropped at Athens polytechnic.
http://ru.indymedia.org/newswire/display/23239/index.php

A movie screening and info event on situation in Russia
http://ru.indymedia.org/newswire/display/23239/index.php

Around 80 people marched, there was a minor fight with local Nazis
http://piter.indymedia.org/ru/node/8938

50 people gathered to a meeting at fountain of innocents. Later in the evening there was also an
unsanctioned march.
http://ru.indymedia.org/newswire/display/23229/index.php
http://www.youtube.com/watch?v=OP5JQ49WMa0

A picket at Russian embassy
http://ru.indymedia.org/newswire/display/23240/index.php

A memorial event at the consul of Russian Federation
http://ru.indymedia.org/newswire/display/23250/index.php

A 50 meter memorial graffiti was made by local anti-fascists
http://ru.indymedia.org/newswire/display/23221/index.php