The sleep of reason produces monsters: “Trends of order and chaos”, episode 81 (20 November) 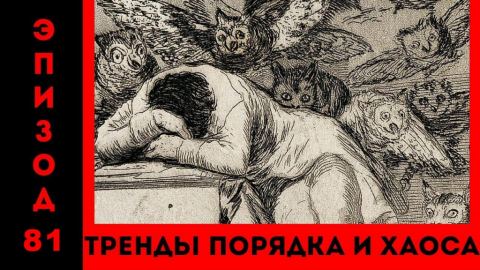 Hi everyone! Today is Sunday, 20 of November and we continue our weekly podcast “Trends of order and chaos” This is episode 81. These are the main topics on past week’s agenda.

“Insider”, citing the channel “Rospartizan” reports that this week, Ilia Podkamennyi was arrested in Irkutsk. He is accused of railroad sabotage. According to investigators, the 18-year-old kid wrapped the rails with a copper wire and “attached to railroads empty pages of a school notebook, that had a message of “extremist content” on them”.

The text of the message isn’t being announced, yet. But, since even pacifism today is deemed extremist, you can even write “peace to the world” – not necessarily on railroads – and give the authorities the reason to deprive you from your freedom.

In a prison of the same Irkutsk, Ruslan Zinin is held. The one who, on September 26th, five days after the start of the mobilization, came to the draft office of Ust-Ilimsk and shoot twice the military commissar with a sawn-off shotgun. Based on article 317 of Russia’s PC, that’s “attempt on the life of an official of a law enforcement agency” – Ruslan is facing life sentence.

The media published Ruslan’s open letter from prison, where he explains the motives of his action. Ruslan confesses that he still has nightmares from the after-death photo of his friend, who died in the Ukrainian war. He could not allow his younger brother, who received the draft note, to be mobilized. “I was honestly certain, that until the very last moment, I won’t harm anyone. I am strongly against violence from an early age. Everyone who knows me well, can confirm this”, - as Ruslan’s letter states.

In the same letter, Zinin asks to “convey his condolences” to the injured military officer, who by the way has already been released from hospital and rushes “to serve the system”. Of course such “condolences” could be a result of – among others- pressure from security forces. Although in his conclusion, Ruslan denies the use of torture against him. But content of the open letter is all about the unacceptability of cruelty and violence that Zinin wanted to prevent, by not allowing this meat grinder to take more young men’s lives.

This Tuesday, 22 of November, at 15:30 is the examination of the request for the extention of Ruslan Zinin’s detention. Ironically, Kirovski regional court, where the hearing will be held, is located on Zhelyabova street (house n.6) – named after a member of Narodnaya Volya and one of the organizers of the (successful) assassination attempt of Alexander II, Andrei Zhelyabov. I wonder, in the light of Zinin’s trial, wouldn’t authorities want to urgently rename the street?

By the way, on November 24, at 15:00 in the Tver regional court of Moscow (Kalanchevskaya 43, room 340) the hearing for the extension of detention for the poets that participated in “anti-mobilization” Mayakovsky Readings and accused of “inciting hatred or hostility” (282 “extremist” article of Russian P.C.), will be held. While on November 23, at 11.15 the Moscow city court (Bogorodsky val, 8, room 331) will hear the appeal on the imprisonment of Artyom Kamardin – one of the defendants of “Mayakovsky case”.

These Moscow streets, under the current regime, are safe from renaming. The second address is the epitome of Russian “spiritual values” (“каланча” is the archaic word for a watch tower at the police station). But antiwar political prisoners need support, regardless of the name of the street.

3. In memory of Timur Kacharava and Ivan Khutorskoy

The Russian regime, of course, didn’t become fascist from one day to another. It simply moved from the margins to higher cabinets and put on the mask of “antifascism”. During the past week days of commemoration of the murdered by Nazis Timur Kacharava and Ivan Khutorskoy. Photos of the actions you can find in our social media under the links 1, 2, 3, 4.

When, it seemed that street fights were left in the past, the government itself, under the mask of antifascism, started persecuting (haunting?) antifascists, while under the pretense of “denazification” carrying out actual genocide. Once, Germany started the WW2 by attacking Czechia under the pretense of protecting the German population. Now, the “we can repeat” is happening under the pretext of protecting the Russian population on Ukrainian territory. Meanwhile, the state doesn’t seem to be bothered by how many Russians died in this war. Yet another lesson on the fact that all those ideas about racial superiority and alleged protection of national interests are leading to deaths and protect nobody.

Whether Prigozhin imagines himself as a kind of Malyuta Skuratov, or simply understood that everything is allowed, but the sadist murders, his criminals commit, are of intentionally demonstrative character. This somehow reminds us videos of executions, circulated by ISIS. Although, it seems that Wagner’s men have surpassed them as well. From cutting hostages into pieces, to hammering a man who returned from hostage.

The left-wing propagandists that support Putin, write all the time about Ukrainian fascism, but on those horrifying images they whether close their eyes, or don’t want to see that they form a system. But in fact this is exactly what this conservative ideal, patriarchal world - enforced on Russia and occupied territories - is all about. I guess, in the future we will see demonstrative executions, like in Iran. Oh wait…

The Iranian uprising – for the updates of which we invite you to follow in our podcasts – continues, despite the harsh repressions and killings, not only of protestors but also of civilians, including children.

These repressions only feed people’s hatred towards representatives of the state and clergy – what in Iran’s case is the same. Regime’s propagandists also cant rest: in Bukan revolutionaries killed an employee of the Ministry of Information

What an unexpected turn of events for those who were hoping to imitate Iran and return people to medieval times. Well, it didn’t happen. Time after time Iranians rebel, and each time with greater force.

The slogan “Woman, life, freedom” Iranian insurgents adapted from Kurds of Rojava. A part of Rojava is occupied by Turkish authorities with “global community’s” condonation: supposedly for the “war against terrorism”. Now Erdogan, frames Kurds of PKK for the recent terrorist attack in Istanbul.

Representatives of PKK deny their involvement in the attack and expressed their condolences to the victims. They also reminded to everyone that they don’t fight with the civilian population.

For Erdogan the scaremongering with “Kurdish terrorists” is typical. This is what the journalist Liza Shishkova says to DOXA: “The power choses the same tactic once again: intimidations with war, terrorist acts, tightening the screws. They need to get rid of all political opponents until 2023 elections. That why they need tension in the country, a search for enemies. The terrorist attack of 13 November is yet another excuse for tightening control and repressions.”

Is this picture familiar? If we remember that Putin came to power amid fear of terrorist attacks, and later kept it by constantly searching for enemies inside and outside of the country, then the version of “Ryazan’s sugar” - executed by Erdogan’s secret services - doesn’t sound controversial. Those who were young during the scandal with the house in Ryazan - in which vigilant residents found hexogen, as they thought, and later security services told them that it was just sugar and they were carrying out trainings - they can read the investigation of Novaya Gazeta here. It was a very murky story.

So, if Putin can, why Erdogan can’t? basically no one can. But to expect justice from the established global system, is impossible. Particularly now, when it’s creacking and fascism returns to big politics, like in Italy. But people need justice, right? And peace, of course! And here is our anarchist duty to explain to people that there will be no justice, no peace, except for the one they will build with their own hands. Otherwise, if they trust again the building of peace and justice to power and authorities, then they will have neither peace, nor justice.