Your desperate mother. Trends of Order and Chaos, episode 82 (27 November) 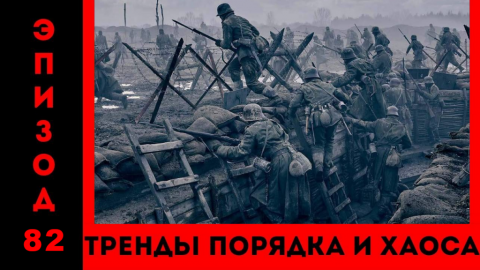 Hi everyone, it's Sunday, 27th of November and we're continuing our Trends of Order and Chaos podcast. This is episode 82. Here are the top stories on last week's agenda.

Around the death of Yevgeny Nuzhin

The story continues with the public execution of prisoner Yevgeny Nuzhin with a sledgehammer. He surrendered to the Ukrainians, but was extradited to the Russian state. Two weeks have passed since the video of Nuzhin's execution appeared, but during this time no reasonable explanation has been given by the Ukrainian side.

One can understand the Ukrainian position. A man who had served 20 years for murder, who had four and a half years left to serve, took up arms and came to a neighbouring country - the Ukrainians do not need such a character in Ukraine, let alone in their army. But according to international legislative no one should be extradited to a place where a person is not awaiting an fair trial and where their life is in danger.

There were allegations on the Ukrainian side that Nuzhin did not pass some kind of polygraph test. But even in a Russian court a polygraph test is not considered as direct evidence. It is not the most reliable device, and often the results of the test depend more on the professionalism of the one who checks than the sincerity of the person being checked. The claim that the Ukrainians did not have Nuzhin's written refusal to participate in the exchange is equally absurd, given that Nuzhin gave anti-Putin interviews under the obvious control of the Ukrainian special services.

In this sense, Yevgeny Prigozhin has won: now the convicts he brought to Ukraine will be less willing to surrender, and even rather choose to die in a desperate situation, taking Ukrainian fighters with them. But the execution of Nuzhin is such an obvious outrage that it will reflect on events inside Russia and its perception in the world for a long time to come.

There are many people who have generally justified the Russian aggression against Ukraine, but they are not ready for public summary executions. Sociology in the context of military censorship is a futile job, but Putin's regime has clearly lost quite a few supporters over the past two weeks. This is partly because no law enforcement department has so far even initiated an investigation of the circumstances of Nuzhin's death.

Another consequence of Nuzhin's murder: a number of human rights activists have been removed from Putin's Human Rights Council. Apparently, those who could have been spinning the execution story. Putin's Human Rights Council is not a decisive body, but there have always been some normal human rights defenders there. Being in this structure, they had the status of Putin's advisers, which helped in the good works.

Among the new members of Putin's council is Alexander Kots, a Komsomolskaya Pravda war correspondent and close friend and long-time colleague of another Komsomolskaya Pravda war correspondent, Dmitry Steshin, a former member of the far-right organization "Russian Image". According to the testimony of Nikita Tikhonov, the killer of Stas Markelov and Nastya Baburova, it was Steshin who introduced him to arms dealers. Steshin is rumoured to have a scorched piece of the corpse of a Chechen field commander at home as a souvenir.

In our podcast we have already referred to the work of Sorokin, but even he has not come up with the plots that life now brings up. Russia's largest school catering supplier (yes, it's one of Prigozhin's main businesses) orders the murder of a man by smashing his head with a sledgehammer. The execution is videotaped and the school catering supplier boasts about what happened.

The action of sending an allegedly bloody sledgehammer in a violin case to the European Parliament is another blow to Russia's ability to restore normal interaction with the outside world. As proof of this, Russia has been excluded from the current football World Cup. Whereas even Putin's closest geopolitical allies, North Korea and Iran, are not excluded.

North Korea itself withdrew from qualifying for the championship, citing fears of covid proliferation, while Iran participates. And Iran's football team at the Mundial has already staged a cool action against the Khomeini regime. We are sure that many of those who have not yet become disillusioned with Putin are not prepared to live in such insane isolation.

Ukraine without light and heat

Amid "negative growth" in the seizure of Ukrainian territories, Putin has turned to the tactic of regularly shelling Ukraine's heating and power plants. Periodically, Russian rocket launchers manage to de-energise almost the entire neighbouring country. Ukrainian authorities say they do not yet know how their country will survive the winter.

How to treat it? It's better than if Putin started detonating atomic bombs. Is it despicable to leave tens of millions of people without light and heat in the cold? Of course, but wars is a despicable thing. Ukrainian shelling regularly affects civilians and infrastructure in Belgorod, Kursk and Bryansk regions. So it's just that Putin has more effective missiles than Zelensky at the moment.

It is not clear whether the Ukrainians can withstand this horror and continue to crush the Russian army. There is also military censorship in Ukraine and it is difficult to estimate the real sentiments of the people. The main conclusion for us is that we cannot rely only on the courage and resilience of Ukrainian fighters. The elimination of Putin's regime is first and foremost the task of the Russians themselves.

Protests by the mobilized continue, and a visible movement is the Council of Mothers and Wives, which represents women whose relatives have been taken to the front. Council members have already been openly tracked by the cops and are accused in the official media of collaborating with Western intelligence services.

Check out the videos from their telegram channel, there are many of them. It's obviously not CIA agents Jennifer Stade and Christina Weinley, but the kind of women you see in the checkout line at any Russian supermarket.

What one makes of this protest? Now the mobilized, their mothers and wives are saying: give them normal equipment, provide adequate living conditions, do not use them as cannon fodder... And we, dear Kremlin, will help you to slaughter Ukrainians in the imperialist war. Sounds disgusting. And that's roughly what they say and think.

But you can hear them in a different way: we don't want to die in frozen dugouts, knee-deep in water, because the Ministry of Defence officials stole the money for the outfit many years ago. We do not want to die just because our officers are idiots and they throw unprepared people into frontal assaults against machine guns and artillery.

And this is already understandable and very dangerous for the regime. By simply defending their right to life, one hopes that the mobilised and their relatives will gradually realise that the problem is not the issued strikeball helmet and the rusty weapons, but the fact that the Russian army should never have invaded Ukraine in the first place.

It is possible that the revolution in Russia will look like a tactical alliance of the most different social forces, and that attitudes to war will at some point be relegated to the background. This can already be seen in the local environmental protests in Moscow, where people with a "Z" on their Vkontakte profiles and people with a Ukrainian flag on their Facebook profiles are fighting the housing developers together.

On Friday, Putin had an epic meeting with the mothers of fighters of the Armed Forces of the Russian Federation, the LNR and the DNR. Apparently these were real mothers, but strictly selected: petty officials, functionaries of Combat Brotherhood, the LNR Public Chamber and so on.

The full recording of the meeting has not yet been published, but the Kremlin press service gave away a few snippets with Putin, quite maddening. Putin said he phonecalled random fighters at the front and they showed incredible patriotism. I wonder if Putin himself believes he was just given random numbers. Or does he think the TV viewers will believe it?

Putin also uttered the phrase: "fighters defending Kherson". Unless the supreme ruler misspoke, he really still hasn't been told which army controls that city. And Putin also said that he monitors the situation on a daily basis with the provision of equipment for the mobilised. And that is interesting: to properly equip 100-200 thousand fighters does not seem to be a difficult task for such a state as the Russian Federation. In fact, it has been solved for one and a half months already, and it has not been solved yet. Even in spite of the Supreme Ruler's undivided attention.

On Thursday, cops in Moscow dispersed an evening of solidarity with anarchists and anti-fascists arrested in the Tyumen case. People were held at the police station for no reason; some were beaten up and forced to unblock their phones. Is it even realistic to hold evenings of solidarity with political prisoners in Russia right now? In principle, it's realistic. But yes, it could be like this. How the cops will behave is unpredictable.

The good news is that the feminist and artist Yulia Tsvetkova has been fully acquitted after years of trial. She was accused of distributing pornography, but as a result her prosecution was ruled illegal. It seems as though Tsvetkova has now left the Russian Federation. And rightly so - the law enforcement doesn't like to lose.

Also, the Napilnik publishing cooperative has released new books: by our author and lecture participant Ilya Falkovsky on the persecution of Uighurs in China and a book on the Kurdish revolutionary movement. Order on the Telegram bot @napilnik_books.

We also recommend Netflix's adaptation of Remarque's novel "All Quiet On the Western Front". Netflix has pulled out of Russia, but a pirated version of the film in Russian is available. Let's not spoil, a very topical film about war madness. About how normal people turn into mobs that shoot, slaughter, burn and crush each other with the tracks of tanks.

That's it for today!  As a reminder, on Trends of Order and Chaos, members of Autonomous Action give anarchist assessments of current events. Listen to us on YouTube, SoundCloud and other platforms, check out our website at avtonom.org, and subscribe to our email newsletter!