The Dusk before Dawn: «Trends of order and chaos», episode 43 (February 26) 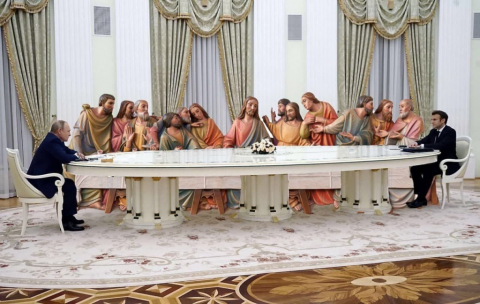 Hello, it is Saturday, and we are continuing our podcast "Trends of order and chaos". This is episode 43. Of course, you know perfectly well what is the main topic of the last week.

On Thursday morning, Putin launched the biggest war in Europe since World War II. He hides behind the alleged interests of the separatist part of Donbas. Although the DPR and LPR were absolutely satisfied with the recognition of their statehood, the official entry of the Russian army and the promised one and a half trillion rubles. Recall that for many months, the cost of rent and food prices in Russia itself have been growing day by day.

The Kremlin has made absurd demands of the Kiev authorities—let’s start with “denazification.” It is true that, thanks to their active participation in the Maidan protests of 2014, the Ukrainian ultra-right has secured an outsize position in politics and law enforcement agencies. But in all the elections in Ukraine since 2014, they have won no more than a few percent points of the vote. The President of Ukraine is Jewish. The problem of the Ukrainian ultra-right must be solved, but it cannot be solved with Russian tanks. The Kremlin’s other charges against Ukraine—about corruption, election manipulation, and dishonest courts—would be far more appropriate for the Kremlin to press against itself. Now, Russian troops are, in the full sense of the word, occupiers in a foreign land—no matter how this contradicts the expectations of everyone who grew up on stories about the Great Patriotic War.

Russia has found itself in international isolation. [Turkish President Recep Tayyip] Erdoğan, [General Secretary of the Chinese Communist Party] Xi Jinping, and even the Taliban are asking Putin to stop hostilities. Europe and the United States impose new sanctions against Russia every day.

As we prepare this text, the third day of the war is coming. The Russian army has a clear superiority over the Ukrainian one, but the war does not seem to be going exactly according to Putin’s plan. Apparently, he counted on victory in one or two days with little or no resistance, but there has been serious fighting throughout the territory of Ukraine.

Roskomnadzor [the Russian government’s Federal Service for Supervision of Communications, Information Technology, and Mass Media] is still trying to threaten the entire Internet, demanding “Don’t call this a war, but a special operation.” But few people take them seriously anymore. As long as the Internet in Russia is not turned off completely, there will be enough sources of information. Just in case, once again, we recommend setting up Tor with bridges, VPN, and Psiphon in advance.

The effects of the sanctions and the war are just beginning to be felt by Russians: Most of Moscow’s ATMs were out of paper money on Friday. Why? Because the day before, people took 111 billion rubles from banks: in fact, all their savings. The real estate market collapsed, and the construction of residential buildings is the most important branch of the Russian economy. The foreign automotive industry is gradually ceasing to ship cars to Russia. The exchange rates of the dollar and the euro are artificially constrained by the Central Bank. Shares of all Russian companies fell severely. Everyone understands that it will only get worse.

Only Putin Needs This

The Russian reaction to the war in Ukraine is completely different from what happened here in 2014 [when Russia seized Crimea after the Ukrainian revolution]. Many people, including celebrities who worked for the government, are demanding an immediate end to the war. The removal of Ivan Urgant, the leading Russian TV star, from the air is noteworthy.

The vast majority of those who still support Putin are also against the war. The average Putin supporter just now thinks that everything has been calculated, the war will not drag on for long, the Russian economy will survive. Because yes, it’s not easy to live with the understanding that your country is ruled by a deranged person—by Don Quixote with a million-strong army, one of the strongest in the world, Don Quixote with a nuclear weapon capable of destroying all of humanity. It is difficult to realize that, having read second-rate political scientists and philosophers, one can bomb a neighboring fraternal country and destroy one’s own economy.

Reveling in unlimited power, Putin has gradually moved away from reality: there are the stories about two-week quarantines for ordinary mortals who need to meet with the Russian president for some reason, and tables of gigantic length at which Putin receives both his ministers and heads of other states.

Putin has always been a politician who balances the interests of security forces and oligarchs. Now the president has stepped out of this role, having gone on an independent voyage through the boundless sea of senility. We are ready to bet a bottle of the best whiskey that in the near future, Mr. President might experience a coup from his own inner circle.

Russia may meet the year 2023 with some other system of power and a different character in the Kremlin. What it will be is unknown. But for now, it is the dusk before dawn.

In the meantime, protests against the war are taking place in Russia. Anarchists participate in them in Moscow, St. Petersburg, Kazan, Perm, Irkutsk, Yekaterinburg and other cities. In Russia, it is extremely difficult to organize street protests; this is fraught with administrative and criminal terms, not to mention good old-fashioned police violence. But people are coming out all the same. Thousands have already been detained, but the protests continue. Russia is against this war and against Putin! Come out—when and where you see fit. Team up with friends and like-minded people. Social networks are suggesting Sunday at 4 p.m. as the time for a general protest action. This day and hour is no worse than any other. Download anti-war leaflets for distribution and posting from our website and social networks!

Russian fliers opposing the invasion, reading “You pay for Putin’s war—taxes, closed borders, poverty, service blockages, information vacuum—no war!” and “No to military invasion of Ukraine: peace to the people, war on the rulers.”

Meanwhile, Ukrainian anarchists are joining in the territorial defense of their cities. It is now harder for them than for people in Russia, but this is one and the same defense. This is the defense of freedom against dictatorship, of will against bondage, of normal people against deranged presidents.

If Putin suddenly comes to his senses by some miracle, and the war ends one of these days, are we ready to “return to our sheep,” as the French say? It is likely that we will be kicked out of the Council of Europe. Thus, Russians will lose the opportunity to apply to the European Court of Human Rights, and soon the Kremlin will restore the death penalty.

For now, we will return to the news in the spirit of all recent years: right now, the State Duma [a legislative body in the ruling assembly of Russia] is adopting a law according to which a military conscript must himself come to the military enlistment office rather than waiting for a summons. Putin also recently raised the salaries of the police. And the prosecutor’s office, in an appeal, demands to increase the term of an anarchist from Kansk, Nikita Uvarov, convicted in the famous “Minecraft terrorism case,” from five to nine years.

You yourself know what to do with all this.

Freedom for the peoples! Death to empires!

And that's it for today!  We remind that in this podcast, participants of the "Autonomous Action" are reviewing current events from the anarchist point of view.  Listen on Youtube,  SoundCloud and other platforms, visit our website avtonom.org!

Episode 43 is authored by Listyev
English translation by CrimethInc

This sort of synthetic review

This sort of synthetic review is really very useful for those of us who are far away from the Russian language and from the countries directly involved in the conflict. It keeps us informed and lets us orient ourselves in what is to be done in solidarity. Thanks a lot.