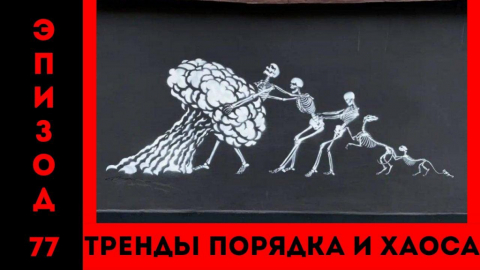 Hi everyone! Today is Sunday, 23 of October and we continue our weekly podcast “Trends of order and chaos” This is episode 77. So, what we saw and thought about this week?

The country has declared martial law

On Wednesday Putin held a Security Council meeting, where he introduced martial law on annexed territories, and in varying degrees semi-state of war on central and southern regions of RF. This is a logical step. After the so-called referendums on Ukrainian soil - that only North Korea recognized (which is quite symbolic) - Ukraine predictably didn’t get scared and didn’t return to negotiations. That way, in terms of RF’s legislation, military operations are conducted on territories that are supposedly parts of Russia. Not to mention Belgorod oblast, which UAF is tearing down with daily shelling.

The situation asks for declaration of martial law on all Russian Federation, but authorities are rightfully afraid that, in this case, country’s economy will suffer a similar fate to the one of battleship “Moskva”, therefore invent levels of threat and regimes of response.

Presently, Russia has entered a period, where laws consolidate the current state of affairs, rather than regulate something. They’ve been sending thousands of convicts to war for months, but only now they try to legitimize the practice. Authorities intend to toughen the penalties for the so-called “gay-propaganda”. This is important, given that in some regions of North Caucasus they can kill for homosexuality with absolute impunity.

Martial law is limitation of human rights, strengthening of control, a possibility of property seizures and forced labor for the needs of the military.

Martial law is not responsible whatsoever for the fact that, this week, the libertarian actionist Pavel Krisevich was sentenced to five years of prison for a performance on Red Square in the summer of 2021 – for which, five years ago, he wouldn’t even have gotten five days of sentence.

Fabricated criminal cases, tortures of arrested, demands to unblock telephones during apprehension – all this was already happening. You can’t scare a hedgehog with a bare ass. It reminds us the song “Poganaya molodyozh” (Filthy Youth) of the good old Yegor Letov. In the song, he also sang about martial law, with the call “not to give a shit about it”.

Today, Russia’s repressive machine practically works on maximum. To toughen the repression, the regime simply doesn’t have enough cops. The minister of interior affairs Kolokoltsev recently voiced a “shortage” in 90 thousand cops, but that is considered a conservative estimate. Among the stuff of the security forces there are numerous chiefs, chiefs of chiefs and so forth. Meanwhile, the departments that have to calm the rowdies and catch the crooks may have twice less officers than required by the organization chart.

Most of the “shortage” is observed in the Ministry of Internal Affairs and Federal Penitentiary Service. But similar problems have the Prosecutor’s Office, Investigative Committee and FSB. Security Forces in 99% of cases are by no means our “bros”, but among them, the dissatisfied with Putin’s regime are more than one could think.

The government tries to address this problem – in the next year, we must expect an increase of budget spending on law enforcement officers. Will these cash injections help? It’s unclear: prior to invasion of Ukraine there were large cash injections into the army, while on practice we see that the mobilized don’t even have body armor and camouflage. The cost of providing for the mobilized men falls on the regional budgets – often already on deficit. I don’t know any historic examples where aggressor’s army is not dressed in unified camouflage, but instead resemble forest brothers of 1812 or characters of the film “Peculiarities of the National Fishing”

Recently, manhunts on mobilized started in the streets of Moscow and Saint Petersburg. With phenomenal - even for the current times - disrespect for the people. Cops were ordered a plan to catch a certain amount of living beings with one head, two hands, two legs and a penis. After a couple of days at the assembly points, the military sent many of the mobilized home. Because, they had a plus-minus plan Putin talked about – about combat experience or, at least, having served in the army.

Moscow’s mayor Sergey Sobyanin felt the level of mayhem and understood that even if people don’t have enough power to fight the cops, then the collapse of government services will start – men are afraid to go to MFC (Multifunctional Center for provision of state and municipal services) in order not to receive the draft letter there, those who could, were transferred to remote work and most employers have sided with their employers in this matter. Sobyanin, by his own decision, stropped the mobilization in Moscow. Later, similar decisions were taken by the heads of several other regions.

Sobyanin didn’t had the authority to stop mobilization? Well, the delivery of draft notices not by military men, but by some shady people in civilian clothes, mobilization not by address of registration and so forth, is also absolutely illegal. There are no laws for anyone at this point in Russia.

From the begging of the war, when talks come to who - from the current elite - can be given power instead of Putin, many remember Sobyanin. Because, Sobyanin made his career not because he once studied, worked, went to the same gym or had a dacha next to Putin. Because, Sobyanin had nothing to do with the war.

In fact, the war is destroying everything Sobyanin was trying to create for the last 10 years in Moscow. Barbershops, coffee houses, bars, beautiful small shops, benches, bike lanes, bike rentals, fancy playgrounds, small and medium businesses, permanent housing construction and new metro lines – all this was obviously incompatible with the plans of expansionist wars against Ukraine and other neighbors, of this shitty empire.

Sobyanin, of course, doesn’t openly oppose to Putin, but until mobilization, Moscow was trying to paint an image that nothing is happening. For instance, up until now there aren’t any Z-banners on the streets of Moscow, as is the case of the majority of Russian cities.

Yet, I think Sobyanin is the weirdest politician of our times. I have visited Cairo, Tel-Aviv, Madrid, Berlin, New-York and other megalopolises of various countries. I’m sure, Sobyanin’s team consists of professionals of the highest level, in organizing the life of a multi-million city. He would have had good chances to win in municipal elections of any European capital.

Still, Sobyanin is scared of any civil activity. Moscow is the most politicized city of the country, but Sobyanin, was has been consistently toughening the regional rules of organizing protests and pickets – they are the strictest in Russia. Moscow is almost the only region where pickets are still not allowed due to Covid. Sobyanin has created a system of numerous media, who from broadcast to broadcast are kissing his ass.

Sobyanin is a fan of technological control, of Singapore and China style. Many of his actions are carried our openly against citizens’ views. That was the case of Troitski forest: citizens wanted a new school, but not at the expense of the forest – their opinions were ignored. In Bitsa park, the municipality wanted to spent 22 billion rubles on a highly questionable development program. The discontent of citizens of neighboring areas was also demonstratively ignored. “The biggest panoramic wheel in Europe” that Putin inaugurated when Russia’s army was kicked out from Kharkov oblast, was also build despite the years of protests of residents of Ostankino and VDNH.

Sobyanin’s projects often disrupt the way of life, formed for many years in those areas. While the officials, who come up with those projects, give you the impression that they receive bonuses for the most demonstrative ignoring of residents’ interests.

In order to build a life in people’s interests, people have to take matters in their own hands and free themselves from this god-damn regime. No one will save us – neither UAF, nor the passionate Dagestani mothers, let alone Sobyanin. Only we can take our lives under our control.