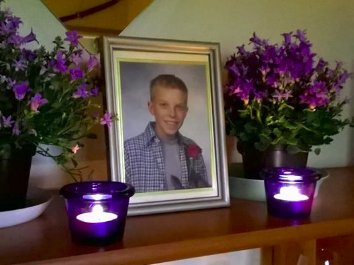 According to still not fully confirmed information the Nazist Finnish Resistance Movement (Suomen Vastarintaliike, SVL) killed a bypasser during their street event on the 10th of September, near Helsinki Railway Station. The next day SVL published on their website a picture and a video featuring the person they assaulted, along with a text glorifying their violence. According to the victim’s family, the young man that SVL assaulted died in hospital last night, September 16th at 10 PM, from the serious injuries he received. Anti-fascist network Varis takes part in the grief of his family and friends.

Helsingin uutiset news media writes that Helsinki Police “confirms that a case of assault was registered at the Station square on Saturday 10th of September, and that a death is connected to it”. Although a crime report and witness accounts were delivered already the day following the assault which led to the fatality, police does not yet comment on whether there was a cause-effect connection. The victim’s father, interviewed by tabloid Ilta-Sanomat, says that “his son was knocked to the ground with the result that he hit his head on the pavement and lost consciousness. He was taken to Töölö hospital. On Thursday he was sent home with doctor’s permission. He didn’t remember anything about the event, but his friends told me. Yesterday on Friday, he had a brain hemorrhage at home. He barely had time to call the emergency number before he lost consciousness. He died there [in hospital] at 10 PM. I managed to visit him in the hospital, he was in respirator”.

The deceased’s family tells that the assaulted person succumbed to brain trauma. “My dear son Jimi Joonas Karttunen was assaulted on Saturday 10th of September, 13.00 o’clock at Eliel square (Helsinki) by Finnish Resistance movement in an event they had. The nazi-skinheads assaulted my son causing him a serious brain trauma. Because of this totally futile violent attack my son Jimi Joonas passed away yesterday 16th of September around 22.00 o’clock in Meilahti hospital. May his soul rest in peace! The criminal police is aware of the episode.”

According to the father, the victim had walked by the SVL’s street event, and told the Nazis what he thought about their far-right politics, for which he was beaten up with fateful consequences. In SVL’s own version, the bypasser had recognized the organization’s flag and started “behaving aggressively”. SVL published on their website a picture where the victim of the violence lies on the ground next to a splatter of blood, and commented on it as “a swift restoration of discipline” to a bypasser of different political opinion. SVL has also in the past assaulted random passers-by during their street events, for example in Myyrmäki, Vantaa (suburb of Helsinki), and in Jyväskylä. SVL uses this as a way to build an image of themselves as a violent paramilitary group, in order to attract violent young men to join in their activities.

After the violent assault SVL actively advertised the episode online, e.g. in Twitter. For example, SVL member Eppu Torniainen tweeted September 11th, “Feel like spitting and issuing violent threats? Do it somewhere else”, to which SVL member Juhani Keränen replied: “@JesseTorniainen seems that guy was caught by surprise, when the other side didn’t have patience for his childish noise”. The news was also published by antisemitic media Magneettimedia, which SVL has control over, as well as racist “news” site linked to Putin trolls “MV-lehti” (owned by Ilja Janitskin), with the headline “Video: hothead opposing ‘racism’ makes fool of themselves in Helsinki”. In the article itself, the violent assault was described as “disciplining action”. SVL’s tweets were retweeted mainly by the movement’s Finnish, Swedish, and Norwegian members, along with a few other far-righters. In addition, SVL’s internet radio “Studio 204” spread info about the assault. The numbers in the program’s name refer to Adolf Hitler’s birthday, 20.4.1889.

SVL members Jesse Torniainen and Santeri Juhani Keränen brag to each other about the assault. Also SVL’s web-radio Studio 204 glorified the violent assault.

@JesseTorniainen: “Feel like spitting and issuing violent threats? Do it somewhere else”.
@Riimuradio (SVL propaganda channel): Antifascism is always a crime of drug use.
@JesseTorniainen: Even junkies need meaning in their lives.
@Juhani_Keranen: “@JesseTorniainen seems that guy was caught by surprise, when the other side didn’t have patience for his childish noise”.

Below are listed the persons recognized in the pictures from the street event which led to the killing. If you recognize other persons from the pictures, you can tell us by email: varistoimitus[at]riseup.net.

At right: Otto Rutanen. Rutanen is one of SVL’s leaders, and has functioned also as the leader of SVL’s Helsinki group. Rutanen is a former bonehead-nazi, and has been convicted for violent assault among other things..

Arttu Pylkkänen. Pylkkänen was convicted of the gas attack on the Helsinki Pride Parade in 2010. He has taken part in SVL’s activism almost from its foundation.

In SVL’s own video, Jesse Eppu Torniainen can be seen among the first in the group to start intimidating passers-by critical of the national socialist worldview. Torniainen is known as one of SVL’s most violent members. He has been convicted several times for violent assault. Torniainen has among other things stabbed an immigrant in the back. Part of SVL’s activities almost from the start. Mentioned also in the criminal investigation of the Pride attack

Santeri Juhani Keränen. Keränen is leader of the Oulu local group, and active in trying to spread nazi propaganda in social media.

Petri Nordman. Nordman has been involved in SVL’s activism almost from the start. He has among other things filmed anti-racist demonstrations.

Tomi Tiihonen. Tiihonen is known alongside Torniainen as one of SVL’s most violent members. Convicted among other things for arson, together with Torniainen.

The video published by SVL of the street event which led to the casualty: