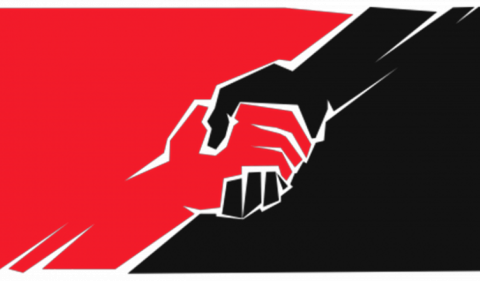 Ten years ago, in November 1999 in Seattle the anti-authoritarian movement manifested itself during demonstrations against a meeting of the WTO. This new phenomena was named the “Anti-globalization movement” by the mainstream media, which resulted in a lot of confusion and unclarity in terms of the perceived goals and methods of the manifold movement.

The insurrection in Greece, which started in December of 2008, and its support around the world proved, that the anarchist and anti-authoritarian movements, which were only one of the many parts of the “Anti-globalization movement” , have now grown and can challenge
the existing order of things on their own.

If the first decade of 21st century was a decade of neo-liberalism, government strategy during the second decade will be reaching for a governable state capitalism, with all the consequences: the strengthening of control mechanisms, and escalation of wars over control of natural resources under the label of the “war against terrorism.” Those leftists who have integrated into the system will hail the increasing role of the state, even if there are no new social benefits to be expected by emptying coffins of the system. However for us, libertarian communists, there is nothing to be happy about. We always knew, that when the good days would end, capital would be screaming for the state to rescue it. Even though the immediate result of the crisis will be increasing repression, we will also see new possibilities emerging before us.

If ten years ago we were few, today in Russia we have numbers comparable to any other oppositional tendency outside the parliamentarian framework. In Belarus and Ukraine, the situation is the same. Besides the increasing independence, inside the anti-authoritarian movement we can see the lines between anarchism and anti-authoritarian marxism vanishing. There are more and more political groups and websites, where anarchist and anti-authoritarian marxist texts are found next to each other, and although differences of appraisal still exist, we believe that we can now talk of a single movement, which we call libertarian communist.
We do not pretend to establish a new theory - it was a widespread mistake amongst theoreticians of the “Anti-globalization movement,” that they pretended to be something very new. The more they claimed, the more they wrote banalities and nonsense. The basic criticism of capitalism is about as old as capitalism itself. But from time to time, we should meet to discuss perspectives of our movement in the framework of global capitalism, evaluate successes and failures of our fight and plan new struggles. For this purpose, we invite you to the “Libertarian communism 2010” forum to be organised in Moscow.

The main themes of the conference

-The fee will be either 400 rubles (around 9.50 euros) for the whole forum, or 150 rubles (around 3.50 euros) per day, with the exception of the concert. The fee covers lunch on the 6th, 7th and 8th of March.
-We will provide housing in the flats of local activists. We guarantee sleeping places from the 6th to the 8th of March, on the condition that you announce your arrival by the 10th of February 2010.
-Traveling costs can be partially refunded for participants from inside the former Soviet Union. Priority will be given to refunding the travel costs of those who will contribute to the organisation of the forum.
-If you want to organize a lecture, discussion or workshop, you should let us know the topic by the 1st of February 2010. Please also enclose a short thesis. These will be passed to other participations of the forum, so that they can prepare for the discussion in advance. After the forum, the thesis appended with commentaries from the discussion will be published, online or in print. If you want to organise a lecture, we would be happy to receive that as a whole in written form, if possible.

-If you want to come just as a participant, you should register by the 10th of February 2010. Registration also means a commitment to pay a registration fee, and we have to know the exact number of participants in order to make the budget accordingly.
-In case of serious financial difficulties, guests of the forum may have the fee waived (priority will be given to people from the former Soviet Union).

The principles of organisation of the forum

Learning from the experiences of previous similar events in Russia (The Libertarian Forum in Moscow 2006, annual Black Petrograd-festival in St. Petersburg since 2004, annual Deserter Day festival since year 2005), our forum will be organised based on the following principles

During the last several years, there has been a constant growth in the anti-authoritarian movement of the former Soviet Union, but our infrastructure has yet to be adapted to this growth. Before, it was no problem to organise an event with 50-60 participants, whereas now we must expect 200-300 people to join. Until recently a number of events of national scale were either underground or restricted, not due to the elitism of the organisers but due to problems with the infrastructure. This time we will attempt to solve the infrastructure problems, without compromising  the openness of the event.

Due to the aforementioned infrastructure problems, recently anti-authoritarian events have become either very costly for the few organisers, or have been organised with some money from outside sources, meaning grants. Due to the crisis, grants are more and more difficult to receive and the scale of our event is becoming so big that it is more and more difficult to find grants to cover all of the costs, and in a few years it will become all together impossible. Thus we should find other ways to finance our events which do not depend on the availability
of outside sources or the salaries of organisers. The budget of the event will be open, it will be announced to participant after the event.

3) An increase in the level of debate

In the last years, the main efforts in the organisation of inter-city events were directed towards the organisation of concerts or actions, thus the theoretical part remained weak. The “Libertarian communism 2010” forum may or may not be accompanied with action(s) or concert(s), but the main focus will be directed towards the organising of discussions, which will be on interesting and actual topics with speakers who have something to say.

4) Approach towards an outcome

In recent years, hundreds of hours during national events on the territory of the former Soviet Union have been wasted on talks which gave no concrete results whatsoever. During “Libertarian Communism 2010,” any discussion should aim to reach some concrete results,
which will be published either on various websites, or printed press such as the “Avtonom” journal. People, who are not ready to work towards that should not ask us to be included in the program. Besides that, discussions and lectures on the concrete problems of organising should not start from zero, but should include an assessment of past results in the field.

The “Libertarian communism 2010” forum is initiated by Autonomous Action, but prepared by a group which is not linked to any concrete collective. We wish for participants in the conference to leave their conflicts with other members of the movement outside the event. Our only condition for joining the conference is that we will not accept anysupporters of authoritarian ideas.

If you need any clarifications, please write to libcom2010@gmail.com

Let the second decade of the 21st century be a decade of libertarian communism!