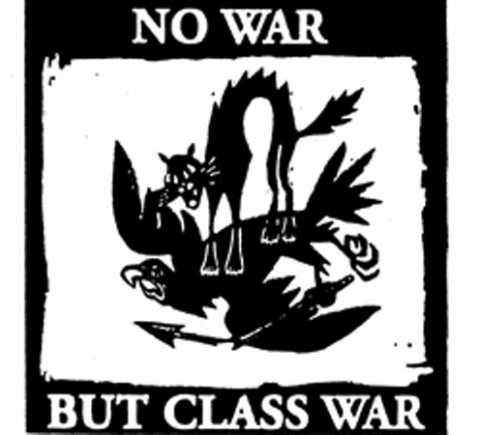 This text was written as an answer to our foreign friends' questions about situation in the Eastern Ukraine and Russian anarchists' attitude towards that. We hope it will be of use to everybody interested in these matters.

The situation is complex and controversial and you should understand that the text below does not (and can't) reflect the opinion of all Russian anti-fascists and anti-capitalists. We discussed this within our group, but even here we have a couple of contradicting points of view.

Anyway, our organization ("Autonomous Action") mostly agrees to this anti-war statement of left-wing movements. We do not support Ukrainian government (neither government, in fact), and undoubtedly there are some harsh nationalist tendencies in the Ukraine today. However, even less is our support for Russian government and for so called 'Novorossiya republics'. It seems that fascists are fighting each other at both sides in this war, backed by capitalists. Additionally, for Putin this war is a chance to distract Russian people from financial crisis and recession in country's economic system, while for Poroshenko the war is useful as a way to channel people's strive for changes into patriotic madness, instead of trying to continue what had started in Maydan and establish real self-government.

Concerning the attitude of Donbass people, we would say that most of them do not want anything except 'stop bombing us, both of you'. Leaders of pro-Russian paramilitares several times told in public that "Donbass people don't want to fight, that's why Russia must directly invade". In fact, politically passive population is characteristic for many exUSSR territories. However, it is known that in the spring of 2014 opinion polls showed that only about 20% of Donbass people supported separating from the Ukraine and joining Russia. Of course, right now it is very difficult to conduct any opinion polls in war-torn land. Moreover, tens of thousands left Donbass as refugees - both to Russia and to western Ukraine.

We do not support the view that Donbass war is some kind of 'resistance against Ukrainian fascists'. As stated before, there are nationalist tendencies in contemporary Ukraine, but hardly more than in any other exUSSR country. In Russia, patriotic, imperialist and outright fascist propaganda is at least as often heard as in the Ukraine or even more. And pro-Russian 'people's republics' of Donbass mimic this. Judging by what we know from there, there is no sign that any changes happen there which can be considered 'leftist' or at least 'social democratic'. Vice versa, they keep issuing 'laws' like prohibiting homosexual relations or establishing 'dominant role' of Orthodox Church in the region. The rhetoric of their leaders is exactly what you call 'red-brownism': a paradoxical mixture of right-wing conservatism and Soviet-like imperialism. We know about cases of ethnic cleansing under their rule: at least it happened with Jews and Roma people. So, it comes as no surprise that European fascists are joining them.

Thus, we believe that 'anti-fascist struggle' is here a simple label, which does not have anything to do with the reality. And the reality is that these 'republics' are an attempt of Russian imperialists to back pro-Russian nationalist groups in the region and to provide them with weapon, equipment and lately with armed forces in order to create havoc there. The final aim is, perhaps, to use the situation as a tool in stopping the Ukraine from joining NATO, and, as stated before, in distracting attention of Russian population towards some external enemy. It is ironic that at the same time Russian laws proclaim any call to separatism to be a grave crime, and you can be sent to prison for several years if you demand a referendum like the one conducted in the Crimea in March 2014.

It's difficult to say anything about left or anti-capitalist resistance in Donbass right now. The region is in the hands of tens or hundreds of paramilitary groups, only very loosely united under self-proclaimed 'ministers' and 'governors'. It is very possible that some local leaders  can stick to left-wing political views. However, there are no signs from them, no clear political statements. Additionally, it's obvious that the region is under heavy Russian influence (enough to say that large part of military leaders are Russian citizens), and of course Putin is not very much interested in real anti-capitalist resistance there. Nationalists, monarchists and Orthodox zealots are much better for him.

We understand that Putin's propaganda really works well on people in the Western countries, because they are sick and tired of their own leaders and Putin looks like 'hooligan' who threatens these leaders and scares them.  This propaganda already drove some international fighters to Donbass republics. However, we, living under Putin's regime, would like to warn you against thinking about him as some kind of Che Guevara. He is not. Contemporary Russian elite is a rather plain company of rich capitalists, mostly united around persons who are either Putin's old friends or somehow related to Russian secret service ('Federal Security Service', FSB). It would be absurd to think that they are progressive from any point of view. They simply want to stay in power for as long as they could, because in case they lost this power, they would be immediately sent to trial (corruption among the authorities is immense here), and they clearly understand that. That's it.

Having said that, it is important to emphasize that Russian anti-fascists (even those who were considered to be left-wing or anti-authoritarian) do not have a unified point of view on the Ukraine war. Some believe that even these right-wing Novorossiya republics are better than 'Ukrainian fascists'. Several antifa groups declared themselves 'Russian patriots', and, to our mind, are now a kind of 'left-wing fascists'. We know of at least one Russian militant antifa who was killed while fighting for Novorossiya. At the same time, several Ukrainian anarchist anti-fascists fought against Novorossiya, within Ukrainian volunteer squads. Sadly, it looks like the whole notion of 'anti-fascism' is so much worn out in propagandistic use (from both sides of the conflict), that it is impossible to seriously apply it to anything or anybody.