Notes from the general strike of 100 million euros 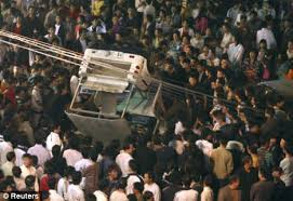 We flowed among the water and our co-demonstrators to the mass demonstration at the central railway station in Helsinki. We were there to oppose the redistribution of income from the poor and the middle income workers to the rich, and from employees to corporations planned by the cabinet of prime-minister Sipilä. There were more than 30,000 of us.

STOP, as the demonstration (TN: 18th of September 2015) was called, was the largest in Finland for decades. It was the biggest that I have personally ever attended in this country and possibly the biggest demonstration of labor unions since the 1950’s.

It probably is the first one in the 21st century that saw a lot more people than it seemed it would judging from the Facebook event. So everything isn’t yet organized through social media. The internal work of unions, peer organizing and charter buses from the provinces succeeded to bring people to the streets.

After the demonstration we occupied Porthania building, a part of Helsinki University campus for a general assembly of the university people, for a party, and for accommodation.

At the moment I am overfed with information, hungry, my feet are aching and my shoes are still wet. The first thought about the demonstration is that it succeeded with its goal. The public transportation was largely halted all around the country and the labor union movement managed to mobilize tens of thousands of people despite of rain, despite of bleak moralization by the media and logistic problems with getting to the demonstration.

My premonition was that if the demonstration saw less than ten thousand people, the unions are ready to be flushed from the toilet. I learned my fear was unnecessary. Unions delivered the tour de force they had promised.

Speeches about rights aren’t enough. When rights are put in opposition, the deciding factor is power. It is up to both the government’s and the unions’ exhibitions of power, how bad or good the rights of workers are going to be in the future.

2. It is appealing to be a scab. Why were there 85,000 people clicking to attend a Facebook event called “Working on the 18th and proud of it”, while only 12,000 people attended on the STOP demonstration’s Facebook event.

Declaring that you will go to work doesn’t require anything else than keeping things as they are. It is merely a click of identity that doesn’t require even a feign promise of anything out of the ordinary.

A demonstration on the other hand is an event that you would have to physically attend, an event that is in opposition with the status quo. It requires more energy and courageousness.

Of course one can ask why more people didn’t click just for solidarity even if they themselves would not turn up. This is partly explained by the fear of being labeled as difficult and losing one’s job. The question still remains: why did breaking a strike and opposing a demonstration feel so appealing to such a vast number of Facebook users?

In all likelihood not all the attendees were high-income entrepreneurs or investors. Why do the ones that are ruled upon demand more cuts from themselves? What makes people demand: “Less holidays for me! Cut my wage! Deteriorate my working conditions!”

3. Let’s talk about social media on a broader level. The higher up you look in the union ladder the less they understand social media, young people or the changing of the entire society. Individual active union members and groups like Liitto X (Union X) used Facebook, blogs, and Twitter to organize, but for example the Facebook event of the demonstration was poorly made. Most of the time right-wing trolls used social media more effectively than the unions and their supporters.

It was named as a manifestation of wage earners, as if students and the unemployed wouldn’t be welcome. Who even identifies with the character of a “wage earner”?

Also missing was a positive alternative for the cuts. It included solely the rhetoric of stop and no.

4. Reportage on the strike was hostile as anticipated. Of the large media outlets, the bar was set highest by Helsingin Sanomat who told us that the Finnish people are mobilized more by for example a victory in the Eurovisions, Ice Hockey World Championships and the Night of the Arts, than the “anger” of the demonstrators. So the number one newspaper in the country compares, in all seriousness, continent wide entertainment spectacles hyped and advertised months in advance to a demonstration organized in a week and held in pouring rain.

It is difficult to see the article as anything but an undermining of the record breaking demonstration. Real political journalism would have been comparing the STOP-demonstration to previous demonstrations held in Helsinki.

5. Democracy and the parliamentary system. Many columnists have defended the government by saying the people voted Sipilä for a mandate to cut, so stop complaining. Striking and demonstrating is undemocratic.

There’s so much backwards thinking in this statement that it is difficult to choose where to begin. The whole of parliamentary democracy was achieved by organizing a general strike in 1905. Was that also undemocratic?

Second of all in Finland one votes for parties, not cabinets. The cabinet is formed by the parties that were voted by less than 40% of Finns eligible to vote. In other words not the majority.

Thirdly, people voted based on promises which the current cabinet has blatantly broken. As we have remembered in the last couple of days, before the elections Sipilä opposed a waiting period for sick leave benefits and the Finns party claimed they are defending the poor.

And at last one can ask: how democratic is the current extremely hierarchic parliamentary democracy that is lead by parties and the media?

Whatever one’s opinion is, without strikes and demonstrating there would not be a drop of democracy in the Finnish society. Rights aren’t granted as gifts from the above, but the rulers have to be obliged to them.

""What is this union rampage for? A legal and democratically elected government should be allowed to do whatever it wants!"

A right wing citizen in Germany 1933

6. A demonstration costing a hundred million Euros. According to the Confederation of Finnish Industries the manifestation on Friday cost a hundred million in losses. Whether the calculations are correct or not is pretty irrelevant.

Actually it’s better if the calculations are true! For it shows that the workers have massive power and even a limited strike like this wipes out a hundred million Euros.

A demonstration is supposed to rock the boat. A strike is supposed to disrupt. It is a form of sabotage and its goal is to create such grave damage that the demands of the strikers have to be met.

7. The most repeated joke of the day is, “What disperses a crow quicker than a water-cannon? – Having Reino Nordin to perform at the stage.” The demonstration completely died when Nordin started.

Seriously, get rid of reggae in the Finnish demonstration culture.

8. Why are we taking the Finnish demonstration culture into a direction where the demonstrators are an “audience” and the speakers on the stage are entertaining the crowd? This was the case at the STOP-demonstration as well as at the “We have a dream” demonstration and in the student demonstration in June. Isn’t there any other way to organize a mass demonstration? And why have they become tame and stationary? Why have they stopped moving?

9. Cabinet parties had been invited to the demonstration that was fiercely opposing their politics. What was the point of this?

A demonstration is a manifestation of opinion, not a discussion group.

The same mistake was made in the summer when the organizers of the anti-racist “We have a dream” demonstration invited the founder of Homma forum (TN: a self-claimed “immigration critical” internet discussion board) on the stage.

10. The image and organizing of the demonstration was in advance criticized as dry, gray and reactionary. How in the future could organizing strikes and mass demonstrations be more ”moist, rainbow colored and active?”

I heard a suggestion from an acquaintance who works as a salesperson: “a straight-forward and non-radical slogan on the lines of ‘the worker has earned their wage’ could work”. As the message by Sipilä is that e.g. a low-wage nurse isn’t worth even their current salary since wages have to be cut.

In general unions should actively raise the stories written by regular people about working conditions, effects of the cuts and about spontaneous protests towards Sipilä’s cabinet. On top of this they would somehow need to be able to attack it, as in bring in their own demands that over power the demands of the government.

11. The confederations of labor unions are afraid that in the worst case manifestations and strikes will be held uncontrollably. It is thought at the organizations that having one demonstration can ease the atmosphere in the work place”, Helsingin Sanomat wrote last week.

Of course it is the journalist’s own speculation, but that would be my speculation as well. One of the responsibilities of the leaders’ at these instances is to calm down and control the will to fight of their members.

As it seems that the government will continue with their plans, we should strive for the “uncontrollable abundance” of strikes and manifestations. Unions could bring down the cabinet if they believed in their own strength.