Organizers of the exhibition "Forbidden Art-2006 were found guilty 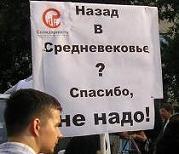 June 12 Tagansky district court in Moscow has sentenced Andrei Erofeev, curator of the exhibition "Forbidden Art 2006", and Yuri Samodurov, the former in 2007, the museum director to them. Sakharov, which hosted the exhibition. Both iskustvoveda were found guilty of "inciting hatred and enmity" and "humiliation of human dignity" and sentenced to fines of 150 and 200 thousand rubles. The criminal case was initiated at the request of participants in the movement "People's Cathedral", which viewed the exhibits of the exhibition insulting the Orthodox religion and the Orthodox believers.

Recall, the exhibition "Forbidden Art - 2006" presented some of 1985-1995, not allowed to show on other shows, for reasons of censorship.At the exhibition you could see the work of some of the most famous contemporary Russian artists such as Ilya Kabakov, Alexander Kosolapov, the group "Blue Noses, Alexander Savko and Mikhail Roginsky. The exhibition demonstrated, for example, paintings with scenes from the Bible, which, instead of Jesus Christ was depicted Mickey Mouse, or painting, where the golden salary, which is usually trim icon of the Virgin Mary, filled with black caviar.

As others have noted, watched the trial, of 134 prosecution witnesses, only three have confirmed that you explore the works on display.One of them literally said that only "glanced" at the exhibition. None of the witnesses could not identify anyone who would start to feel hatred or hostility against the Orthodox faith after visiting the exhibition.

Shortly before the sentencing on July 9, in Moscow, near the monument Griboyedov on Chistiye rally in defense of the Yuri Samodurov and Andrei Erofeev.Rally attracted about 500 participants of various political views: the liberals, socialists, anarchists. At the rally could see flags of "Solidarity" movement, FMG, "Free Radicals", anti-war movement, the Union of Solidarity with Political Prisoners and other organizations.

One of the accused, Yuri Samodurov, speaking at the rally, agreed with the conclusion of the Council on the Arts with the patriarch of the Orthodox Church "koschunsvennosti" works in the exhibition "Forbidden Art - 2006".However iskustvoved stressed that this fact can not be a cause for criminal prosecution in the secular state.

Another defendant, Andrei Erofeev, drew attention of the audience that the movement "People's Council, at the initiative of the participants who began prosecuting the organizers of the exhibition" Forbidden Art - 2006 "can not represent all the Orthodox believers, because represents a marginal organization, while having their illegal armed groups.The latter fact follows from the photographs on the site of the organization.

Interestingly, among the speakers at the rally in support of Samodurov and Erofeev, there were Orthodox Christians, such as the well-known priest Gleb Yakunin and artist Dmitry Vrubel party inserts, passing in the St. Tatiana, Moscow State University, which presents a very controversial art work on the relationship of religion and art.

According to the defenders of the exhibition "Forbidden Art - 2006", symbols of the Christian religion, artists used not to offend the Orthodox believers, but to show that modern people worship such things, such as caviar.As participants in the movement "People's Cathedral" and believers in which the movement has an impact, it is deeply konsenrvativnye people who do not understand the language of contemporary art. It was noted that the chief expert at the trial made an art Eneev, which openly proclaims that the last time at an exhibition of contemporary art, she was 20 years ago, and in general it is not love.

Among the posters and banners at the rally presented a caricature of a trial exhibit "Forbidden Art - 2006", some special demonstration slogans of "People's Cathedral, all the cartoons on the theme of" defamation of religion ".Some participants drew cartoons direct action at the rally.

After the speakers before the meeting made the band "feature".

In the morning on July 12 at sentencing in court came Tagans'kyi at least 300 people - participants in the meeting in defense Samodurov and Erofeev, stronniki Movement "People's Cathedral", and journalists.They could not get into the courtroom - most people were standing on the street.

Participants are notorious art-group "War" managed to smuggle into the corridor of the court Madagascan cockroaches. Activists released insects, which immediately spread to the building. 2 members that were detained and spent several hours in police station. According to a third party to "war" left at large, cockroaches symbolized supporters charged.

On the eve of sentencing Samodurov and Erofeev their unknown supporters painted graffiti on the wall Tagansky Court, which on July 12 has been partly painted over.

The text of the sentence is about 800 pages, the judge read out within 3 hours.During this time the entrance to the court to bar had brought metal cordons. Bored supporters accusations began walking with a procession around the neighborhood and sing psalms.

After the verdict was given an interview to the representatives of both parties who are dissatisfied with the decision rendered.Defendants and their lawyers have called the conviction a disgrace for the state and going to appeal.

Prosecutors also intend to appeal. According to them, Samodurov and Erofeev went "dry out of the water," and for "insulting the Orthodox faith and Jesus Christ," they should get a real life. Recall, the prosecutor demanded the defendants to 3 years of settlement colony. In addition, supporters of the movement "People's Cathedral" are going to initiate against the exhibition "Forbidden Art - 2006" a new criminal case under Art.213 of the Criminal Code ("hooliganism").

Supporters Samodurov and Erofeev, the old Soviet dissident tradition, gave them flowers at the exit of the court, as convicted for dissent.

Yuri Samodurov, together with the curator Lyudmila Wasilewska already carrying a suspended sentence for inciting hatred after they organized an exhibition entitled "Caution, Religion!" In 2003, which also took place in the Sakharov Museum in Moscow. Yuri Samodurov and Lyudmila Wasilewska applied with the case in the European Court of Human Rights.

In January 2010 the Government of Russia was sent to appeal the case.Amnesty International and ARTICLE 19 have come to the conclusion that the previous exhibition also incited no hatred, and Yuri Samodurov and Lyudmila Vassilievska condemned solely because they exercised their right to free speech.

July 12, the day of sentencing to the organizers of the exhibition "Forbidden Art - 2006", "Lenta.ru reported some interesting news. Lublin district prosecutor's office, theMoscow filed in the Lublin district court a statement demanding to image T-shirts with the inscription "Orthodoxy or Death!" (In these shirts on the day of sentencing Samodurov and Erofeev came a few supporters of the People's Cathedral ") in the list of extremist materials.

Image t-shirts caught the attention of representatives of the prosecutor when checking group antireligion "in the social network facebook. The prosecutor's office requires that the court ordered the group administrator remove the image t-shirts.Admin full name not given, known only by his surname - Nesterov.

The experts of the Russian Federal Centre for Forensic RF Ministry of Justice will conduct sociological and psycho-linguistic examination of the inscriptions and images, representing the Orthodox symbols and a skull and crossbones. In particular, the specialists to determine whether the purpose of the image on incitement to religious hatred and promotes a superiority or inferiority of certain groups of citizens on the basis of their attitude to rereligion.

If the experts find in the image-shirts signs of extremism, the administrator group can be brought to justice.