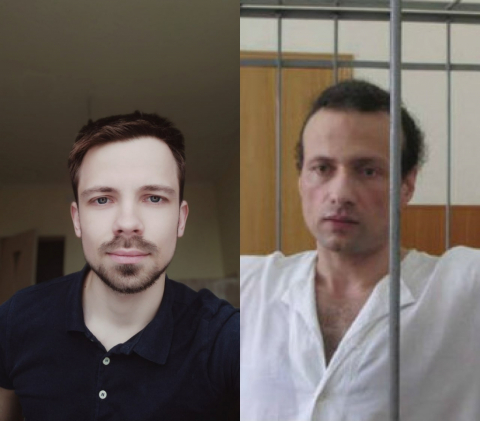 30 year old Denis Serdyuk, suspected of an arson attack against amilitary call-up center in Volgograd, is being held in remand prison #1 of his town. He is being charged with ”destruction of property” and ”hooliganism”, and may be sentenced to 10 years in prison.

Rural teacher Ilya Farber, who is suspected of an arson attack against a military call-up center in Udmirtiya is being held in remand prison #1 in the city if Izhevsk. He is accused of ”destruction of property”.

You may write to them to the following addresses:

Which prisoners receive least support? This question is often asked in support events, and is of interest for both those who are regularly writing to prisoners, and those who write to prisoners first time.

Ukrainian citizen Yegor Kazanets was arrested 16th of May. He is accused of writing graffiti ”Slava Ukraine!” (Long live Ukraine) in St. Petersburg. He is charged with ”vandalism”.

Yegor is 22 years old, he graduated from a vocational school of ship construction and applied technologies as a turning and milling machine operator. Lately he has been working as a loader operator and a barman. In his freetime, Yegor was drawing, watching TV series and listening music. Now he is being held in New Kresty prison of St. Petersburg.

No human rights organisation is currently supporting Yegor, and this far he has only received one single letter during his imprisonment.

You may write to Yegor to address

You may also write to him with the FSIN-Pismo service. . It has only Russian interface, but you may try to use it with an automatic translation.0

FSB has also began a criminal investigation  on preparation of a terrorist attack against an artist from Yevpatoriya Bogdan Azizov, who was accused of throwing blue and yellow paint to building of local building of the city administration.

28 year old artist was arrested 5th of June, and FSB is claiming that he attempted to burn the building with a Molotov cocktail. He may be sentenced to prison for up to 15 years.

Most likely he is currently being held in the remand prison #7 in Kapotnya, as usually all the prisoners in Moscow will be first sent to there for two weeks:

However, as it is no way that letters from abroad will make it to the Russia from abroad in two weeks, it is better to use the FSIN-Pismo online service. It has only Russian interface, but you may try to use it with an automatic translation.