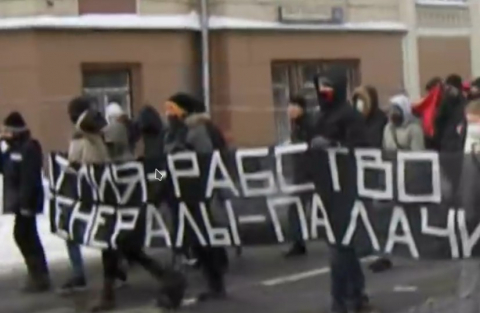 On February 23 in Russia, Ukraine, Belarus and several other former republics of the Soviet Union the holiday "Defender of the Motherland Day" is celebrated. As the name suggests, the holiday is celebrated by people who are serving or were serving in the Russian Armed Forces. This holiday is always full of patriotism and prevailing authorities do their best to fill people's heads with shit, making them to be ashamed of unwilingness of military service and to respect those who served in the armed forces, if not love it. Also 23 of February in 1944 is connected with violent department of Chechens and Ingushs to the Central Asia. As a resuls of this 1/4 of the departed died from cold and hunger.

Before the action, anarchists marched along the street holding the banner "Army is slavery, generals are executioners", they chanted: "Freedom to soldiers, give weapon to the hands of people", "Nobody is born as a soldier, people are dying being soldiers!" and other antimilitarist slogans. Also members of the action spread leaflets, you could read the text below:

"Today you need not to celebrate anything! What does it mean: to defend Motherland? "It means, that you should do your military service in the army" - answer men, who already did their military service and those, who is already out of military age or women, who won't have to do military serve at all.

But it's the time to tell the truth. To confess this simple truth: nowadays NOBODY wants to do military service. Or almost nobody. But everybody try to assure themselves that military service is their "holy duty". And they feel like shit. Because they do something, that they hate.

Because they go to the place they don't want to. Because they spend their time doing the opposite. However, to boycott military service is common right. Because Motherland isn't generals, living in luxurious cottages or oil kilotons in Kremlin or impudent oligarchs. We don't have to defend them, we should fight them.

Military service is involuntary and it's no mere chance. It is no mere chance, that soldiers are cruelly and humiliatingly made to obey generals, that soldiers are made to wean from independent thoughts and decisions. Masters of another person's lives need the mass, which is unable to think. Just a weapon, which is ready to kill anyone. The army, defending the power and prevailing authorities, but not the people, looks like this.

And that's why we call out to break the tether of army! But army is just an instrument in the hands of those, who has power, and it means, that if we really want to deal with military problem, we should destroy the State.