Moscow anarchists in solidarity with the rebels tunisstsami

Today, 23 January, the Moscow anarchists and anti-fascists of the movements, "Autonomous Action", "Keepers of the Rainbow" and other groups held a rally near the Tunisian embassy. In the picket in front of diplomatic missions were about 15 people, yet about 10 anarchists came to deliver a spark to the embassy in memory of more than 300 demonstrators killed in a collision with police during protests against the Tunisian dictatorship. The protesters raised a black anarchist flag and unfurled banners, "Today, Tunisia, tomorrow the whole mi"" The Power of People's Councils in Tunisia "," Carthage is not destroyed, the Third Rome, wake up! "And chanted" We want changes, Carthage, Carthage "," What is Tunisia that Moscow would only give the right fight, "Dictatorship, poverty, common problem - a common struggle, "" Third Rome, Carthage, together, against the price hike, "Solidarity". 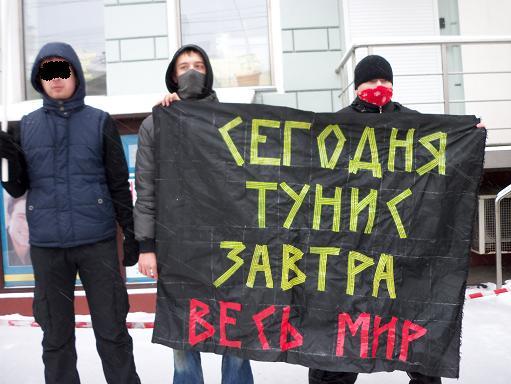 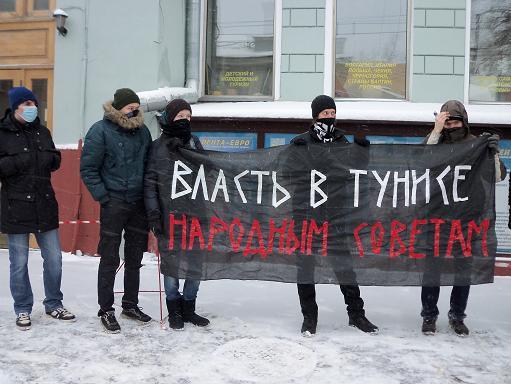 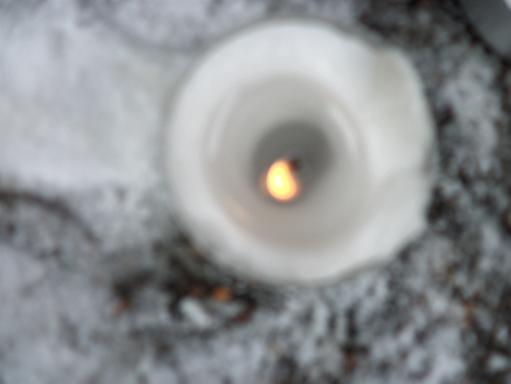 From the Stories of the picketers, December 17, in a small Tunisian town of Sidi Bou Zid, a graduate of the Faculty of Law, forced to run a street trader, committed self-immolation in protest against the inability to work and live.On the streets of the city came out of the crowd Tunisians who were dissatisfied with the economic policies of the dictator Ben Ali, which has led to mass unemployment and falling living standards.The next day, a riot of unemployed covered other cities. The rebels have joined lawyers and labor unions. Police started terrorizing the people. By the end of December to quell the rebellion, dictatorship is allowed to turn death squads composed of foreign mercenaries and local lumpen.

Since January 10 began mass protests in the capital of Tunisia. The police and death squads throughout the country were shooting to kill. But it could not stop the revolution - the street
got the whole country.January 12 had been closed all universities. Began a general strike. Jan. 14 police lost control of the situation. Insurgent people blocked the presidential palace and government buildings. Dictator Ben Ali fled to Saudi Arabia.

Currently in Tunisia to the interim government consisting of members of the former ruling party and the opposition and independent politicians. As representatives of the Tunisian left, people on the street does not stop the demonstrations, demanding the dissolution of the party in power, litigation against the whole of its top party and state, etc.The Provisional Government has announced preparations for the parliamentary and presidential elections, but the campaign rallies of parties collect no more than 200 people, whereas, for example, meetings of students - 50,000.

Contrary to the expectations of the Islamists, the vast majority of Tunisia did not want to build an Islamic state. Tunisian antifascists directly equate Islamism with neo-Nazism.

Youth captures the radio station, the council of each quarter in a hurry to publish his newspaper.In all the cities formed committees of national control of intellectuals, workers and trade union delegates. Despite numerous calls for "stabilization" and "social peace", voiced by politicians, the people on the streets determined to go through. The requirement of ordinary people - the dismantling of the old system and the creation of a new, democratic people's state.

Tunisia today - at the forefront of the struggle for freedom and self-government. Statements in Tunisia are on a par with hire worldwide protests against the neo-liberal course, which has resulted in the global economic crisis and repression of political liberties in many countries.Other Arab dictators and the rest of the world like fire fear a repetition of the Tunisian events in their own country. Indeed, the Tunisian rebels managed to take matters into their own hands and begin to build the structure of national government.

Participants in the Moscow campaign expressed their solidarity with ordinary Tunisians, walked out into the street and broke his life and his fate-of-control politicians.Actions of solidarity with the rebellious people of Tunisia are now held all over the world. Tunisian young anti-fascists sent a video call to support the stock: http://www.dailymotion.com/video/xgkrna_la-revolution-des-jasmins-la-revolution-tunisienne_news