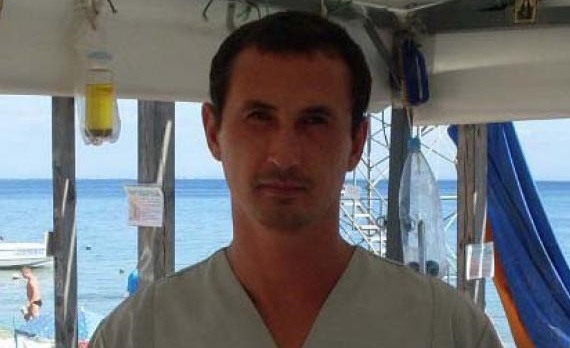 We call for solidarity and support of Crimean anarchist Evgeny Karakashev. The collection of funds for the work of a lawyer and the payment of parcels is started.

Evgeny was born on August 21, 1978. He lives in Yevpatoria, Crimea. He is a leftist activist with anarchist beliefs. On February 1, 2018, Karakashev was detained, and on February 2, 2018, arrested on suspicion of committing crimes under Part 1 of Art. 282 (the incitement of hatred and enmity) and Part 2 of Art. 205.2 (public calls for terrorism) of the Criminal Code of the Russian Federation. He is in custody from February 2nd 2018.

On February 1st, 2018, Evgeny Karakashev was detained by police officers in Yevpatoriya. Journalist Alyona Savchuk wrote in Facebook that on the day of his arrest, Karakashev was searched. "They took him tough: some men in civil broke into, did not introduce themselves, immediately laid him on the floor, grabbed, handcuffed him behind his back. Evgeny says that he stayed in handcuffs until the temporary detention facility. On his right forehead is a huge abrasion. Only in the evening Karakashev could call a friend and ask to find a lawyer", - says Savchuk. - "The investigator Abushayev said that he does not remember how long Karakashev had been handcuffed - 5 minutes or 3 hours, and that Karakashev voluntarily agreed on «offer» to go to police department".

On February 2nd, 2018, the Evpatoria City Court arrested Evgeny for 2 months on suspicion of committing «incitement of hatred and enmity» and «public calls for terrorism».

It appears from the order on institution of criminal proceedings, according to the investigation, Karakashev published a video on one of his pages in social network «VKontakte» at the end of 2014, which allegedly calls for terrorism. In addition, according to the order, in January 2017, he posted from another account in a chat room for 35 people a text that contains signs of "propaganda of the ideology of violence" and "calls for terrorist activities". It is not specified exactly what Karakashev published, however, the document says that the experts investigated «teletext, starting with the words "use grenade against" and ending with the words "in the windows of authorities, good luck"».

It is obvious that the reason for initiating the criminal case was the video "Video Appeal of the Primorsky Partisans" published in the social network "VKontakte", in which partisans explain the motives of their actions. This video is recognized in Russia as an extremist one, as it "incites hatred towards a particular social group" [police].

According to lawyer Alexei Ladin, Evgeny Karakashev himself believes that the initiation of a criminal case against him and the subsequent arrest are related to his activism: he opposed the construction in a resort zone near Yevpatoriya close to a salt lake. Evgeny is an anarchist and antifascist. Karakashev always took an active civil position, f. ex. took part in a protest near the FSB building in the city of Simferopol, and in November 2016, planned to hold an action "against police brutality in the Crimea" near the building of the Ministry of the Interior of Evpatoria. Last action was banned by the local authorities. After this incident, Evgeny was called by the staff of the so-called law enforcement agencies and invited to a conversation to give explanations, Evgeny refused to give any testimonies.

Signs of political motivation for persecution

It is highly probable that the criminal case against Evgeny Karakashev was initiated in the context of his oppositional public and political activities as a participant of protest actions in the Crimea. In the context of the persecution of left-wing activists and antifascists since January 2018, the case of Karakashev seems highly politically motivated.

Thus, the circumstances of the persecution allow us to believe that the detention of Evgeny Karakashev was used to stop his public activities. At the same time, detention was applied in violation of the right to a fair trial, other rights and freedoms guaranteed by the Constitution of the Russian Federation, the International Covenant on Civil and Political Rights and the European Convention for the Protection of Human Rights and Fundamental Freedoms, and was based on the tampering with evidence of the alleged crime in the absence of elements of a misdemeanour offence.

How can You help:You can transfer money with the Paypal system: our address is abc-msk@riseup.net also please mention "for Evgeny Karakashev"