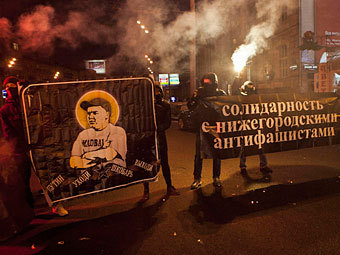 18th of October, lenta.ru news service transmitted that judge refused to sentence defendants of the so called "Antifa-RASH" case in Nizhni Novgorod. Judge Olga Koloverova demanded police to reinvestigate the case, in order to exclude contradictions, which are currently obvious.

According to the prosecution, participators of the extremist society "Antifa-RASH" planned to overthrow constitutional order and to establish anarchy. According to defendants, this is a fictional organisation made out by the political police force "E center", and it never existed.

Three persons were accused in the court - Pavel Krivonosov, Dmitri Kolesov and Oleg Gembaruk. Besides these, Albert Gaynutdinov and Artyom Bystrov are suspects, they are under arrest warrant and their current location is unknown. All accused claim that they hardly knew each other before the case.

According to prosecution, Albert Gaynutdinov set up an extremist society alone, and then recruited others. Activists of the organisation planned to attack against "social groups of well-off citizens" and "skinhead football hooligans". Prosecution did not provided a single expertise, according to which such social groups exist in the sense, which is required by Russian anti-extremist laws, which are sanctioning first of all "instigating hatred against national, religious or social groups".

Three violent incidents were included by the prosecution. According to them, Krivonosov and Bystrov attacked football hooligan Sergey Aleksin and his girlfriend. Kolesov, Gembaruk, Gaynutdinov and Bystrov is claimed to have assaulted Dmitry Redkin. Gaynutdinov is accused of having assaulted Oleg Kalinin.

Assaults were reported to police by the victims several months after the attacks took place. According to defence, testimony was due to pressure from "Center E". Acquintance of Redkin gave testimony, that his testimony was dictated by police in a car, when he was accompanied to interrogation. Krivonosov denies that he has committed any crime. According to him, he was in another part of the town when Aleksin and his girlfriend were beaten up. Gembaruk and Kolesov admitted that they had fought with Redkin, but they claimed that assault had no political motivations.

Each accused denies having been a member of the "Antifa-RASH". During searches, membership tickets of the organisation were found in appartements of all of the accused (with exception of Kolesov), but defendants claim that these tickets were planted by police. Dmitri Dinze, lawyer in side of the defence, requested and investigation if these tickets were printed in local police station, but his request was denied during the court proceedings.

Main witness of the prosecution Aleksandr Chernyi withdrew his testimony in the court. He said, that he gave testimony under pressure of the police. Investigator told in the court that Chernyi came to interrogation alone, but could not explain how Chernyi could have bypassed the security in the building on his own. Chernyi claimed, that he was taken to interrogation by police.

During the hearings, lawyers of the defendants pointed out a number of contradictions in the case. According to Dinze, there is a decision of the supreme court of Russian Federation, according to which an extremist organisation may not be established by a single person, but according to investigation, Gaynutdinov established the organisation alone.

Also, in materials, name of the organisation is written with a mistake - "Red anarhia skinheads". According to Dinze, anti-fascists could not have committed such a mistake, if organisation existed. Also, investigation failed to establish when exactly the extremist organisation was established, and is it still being active.

According to Dmitri Dinze, decision of judge Olga Koloverova relied to closing statements of the defence lawyers. According to Dinze, judge gave a sort of a judgement of Solomon: accused were not sentenced but charges were also not dropped. And "responsability to sort out this mess was passed to those authorities, who made the mess in the first place".

Prosecutor demanded 5 years for Krivonosov, 4 years for Kolesinov, and for Gembaruk a fine of 20 000 rubles and 3 years of prison.Now, investigation may either halt investigation, drop the case, or return the case to court. According to Dinze, it is most likely that the case will simply be buried for good.