From now on, we are going to publish summaries of repressions against anarchists, antifascists and social activists in Russia on a regular basis, as well as on how the state opposes our activity. In the January-February issue: sudden amnesty of antifascists in Moscow, Kazan, Nizhny Novgorod, attempt to ban "Avtonom" zine due to

On Friday 10th of January Basmanniy district court of Moscow ceased criminal case against Alexey Olesinov, Alexey Sutuga, Alyon Volikov and Babken Guskasyan. All four were accused of “hooliganism”, a criminal offense which is included in the amnesty bill, approved as a PR stunt on initiative of Vladimir Putin himself in advent of the Sochi Winter Olympics – most known amnestied political prisoners being 30 detainees of the Arctic Sunrise ship of Greenpeace, and two imprisoned members of Pussy Riot.

Last autumn, a longstanding case against Nizhni Novgorod anti-fascists was returned to investigation, and for a while it seemed like a final victory . However, in contrary to these expectations, the case returned to court this spring and things do not look too good.

In Russian mainstream media, turn of the Nizhni Novgorod was handled with little revealing headlines - "Case of Nizhni Novgorod anti-fascists was returned to investigators". Thus few understood, that as a matter of fact this was perhaps the sweetest victory of Russian anti-fascist movement this year, this far. 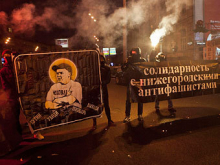 18th of October, lenta.ru news service transmitted that judge refused to sentence defendants of the so called "Antifa-RASH" case in Nizhni Novgorod. Judge Olga Koloverova demanded police to reinvestigate the case, in order to exclude contradictions, which are currently obvious.

The crackdown against anti-fascists in Russia has recently gained momentum. The country’s repressive law enforcement authorities view involvement in the anti-fascist movement as a crime in itself.

Not so long ago, in Rostock, in the north-east of Germany, the anti-fascist
festival "Riot in My Heart" took place.

After the performance, band members from Los Fastidios(Verona, Italy)
and the Stage Bottles (Frankfurt, Germany)as well as one of the
organizers of the festival made a video message in solidarity with their
comrades in Russia.

This is a reminder for the Days of International Action in solidarity with
Russian Antifascists which have been repressed by authorities, to take
place from the 10th to the 17th of June.

Various Moscow antifascists including Alexey Olesinov and Alexey Sutuga are
being accused of having participated in a fight, which took place on the
17th of December 2011, at the club "Vozdukh." They are being charged with
Article 213 Part 2 of the Criminal Code ("hooliganism").

They are also being charged with having caused bodily injury to a resident
of Moscow on the 4th of December 2011. Neither defendant accepts this
chargers and are pleading innocent.

Pavel Krivonosov, Dmitriy Kolesov and Oleg Gembaruk (Nizhniy Novgorod
"RASH-Antifa" case ) are being charged with article 213 (hooliganism), 282.1
(participation in an extremist community), 115 (causing bodily harm) and 116
(assault). They are accused of having participated in an extremist
community, ostensibly created for the attack on neo-nazis (or "skinheads,
football fans," as the investigators have called them) to incite hatred
against a social group of "bourgeois-backed Citizens."

9th of March there was a benefit evening in Lund, a student city located in Southern Sweden. One of the topics of the event was repressions against antifascists from Nizhniy Novgorod. 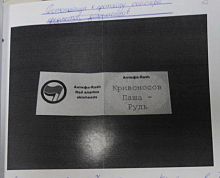 We, the anti-fascists and anarchists of Nizhny Novgorod (Russia), appeal to concerned people around the world. The political police (the Center for Combating Extremism or Center “E”) have fabricated a criminal case against our comrades. Anti-fascism has been outlawed in our city. We need your solidarity and support!

What are the charges against our friends and comrades?

On April 26, 2011, in the morning, six young people were arrested by Center “E” detectives (so-called “Anti-Extremist” cops). Five anti-fascists of Nizhny Novgorod were subject to home-searches. One of the flats was stormed by OMON (Special Police Squad), the windows were broken because nobody was at home.

During the searches the membership cards of a non-existing organisation “RASH-Antifa” with photos and serial numbers, evidently made by Center “E” (Anti-Extremist Center) detectives, were planted in suspects’ homes.

At the present moment by The Anti-Extremist Center of GUVD (General Directorate of Internal Affairs - SM) in Nizhniy Novgorod Region detectives a criminal case is fabricating against Artem Bystrov, who was arrested on April 26,2011. He is incriminated the article № 213 part 2 (hooliganism committed by a group of persons on preliminary arrangement by hatred or hostility toward a particular social group). Two of suspects yet couldn't be arrested. It is worth noting that victim itself — a nationalist D.Redkin, doesn't have any claims to people arrested on April 26 and refuses to take part in confrontments. The case was filed seven months after the accident. It was filed by pressure at the victim and the witness. The investigation is proceeded with gross violations and falsification of evidence. For example during the rummages the membership cards of non-existing organisation “RASH-Antifa” with photos and serial numbers, evidently made by Center “E”(The Anti-Extremist Center - SM) detectives, were planted in to the suspects' homes. <