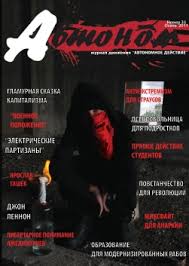 Backside of the cover: Digital weapon of the proletariat. Announcement of the antijob.anho.org – collective on campaign to record violations of the workers rights and to publish them online.

Page 1: Editorial Valeri Listyev. , with a very brief analysis of the current situation.

Page 2: Into the wild. Teenage anarchist writes about her collusion with the Russian juvenile institutions.

Page 8: Discourse of glamour as a semiotic system of the social reality. An attack against production of images.

Page 12: Arab spring – from bourgeois revolution to bourgeois massacre. Sakharniy Holm is frustrated on how things went in Libya.

Page 14: Anarchy in the universities. An interview with student union “Direct Action” in Ukraine.

Page 20: Libcom 2010 behind the curtains. One of the organisers of the biggest anarchist gathering of year 2010 in Russia reveals its inner workings.

Page 22: I plan to fight as long as I can. An interview with Roman “Surgeon” Mironenko, anti-fascist militant, football fan and winner of M-1 selection in Belarus 2010.

Page 30: Interview with mother of Ihar Alinevich, a Belarusian anarchist who got 8 years sentence for involvement in underground struggle against the authoritarian regime.

Page 34: Authorities chose a role of an ostrich. Last words of Andrei Kutuzov, a Tyumen anarchist framed up for “instigating social hatred against police”, in court.

Page 37: On anarchism and violence. Yet another take on one of the all-time favorite subjects.

Page 39: Small Nürenberg in regional court of Moscow. Andrey Estube writes how a court case against murderers of Stanislav Markelov and Anastasia Baburova become a public disaster against the Nazi movement.

Page 42: Do not hurry to fall into that net! Confessions of a diehard. Peyta Ryabov explains, why he still does not use the internet.

Page 46: Many faces of liberty. Nikolay Gerasimov writes on methodology of anarchism.

Page 50: Insurrectionary anarchism. Russian translation of the first half of the influential article from Do or Die magazine. Original in English is available here: http://www.eco-action.org/dod/no10/anarchy.htm

Page 68: Pleasantly yours, tsar. A guest contribution of a Crimethinc agent on turbulent history of 17th century Russia.

Page 72: Power to the people. First half of the interview of John Lennon for Robin Blackburn and Tariq Ali, published 1970 in Red Mole-magazine. English original is available here: http://homepage.ntlworld.com/carousel/pob12.html

Page 76: We are intelligible to wide audience. Avtonom interviews Vadim Kurylev, veteran of Soviet Rock (of bands such as DDT) who now tours with his anarchist rock band “Electric Partisans”.

Page 82: M and F – gender interests of the system of alienation.

Page 87: How to order past issues