Belgium: European Trade Union march against against the summit of the European Union in Brussels (photos) 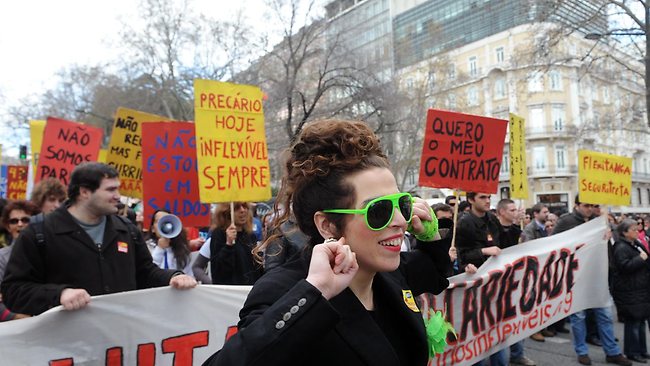 March 24th tens of thousands of people took to the streets of Brussels, where on this day EU summit was held. The demonstrators were protesting against the policies of the EU economy. In several districts of Brussels were formed columns of demonstrators who were supposed to meet around the building, which comprises heads of EU states. In columns involved workers and employees in Germany, France, the Netherlands, Luxembourg. According to the European trade unions who organized the march, the number of participants had reached 20-30 thousand people. Were reported clashes with the police.

Belgian police has used water cannon and tear gas to disperse the columns of Trade Unions. The protesters tried to break into the security perimeter of the EU summit, held these days in Brussels. The workers threw stones at the police cordon, glass bottles and Fireye.

The demonstrators were protesting against the decisions that had to be agreed at an EU summit. Union leaders believe that as a result of the European stabilization mechanism - the so-called "Evropakta" as proposed by the German Federal Chancellor Angela Merkel and French President Nicolas Sarkozy, the social rights of workers to be dangerously reduced.It is this document should be adopted at the summit.

Social spending will be reduced

The main purpose of Evropakta "is to maintain the euro and the introduction of measures on the economy. EU member states will have to tighten their belts.

EU leaders agreed that the need to limit government borrowing, to change the principle of taxation, to reduce the budgetary financing of social sphere and to give up wage increases.

According to diplomats, these unpopular decisions need to be introduced at the national level as quickly as possible to the political opposition was not able to relax these measures.All improvements will be listed in the reform programs of individual EU states and the European Commission will carry out overall supervision.

The EU is trying to save a single currency, the euro, which destabilized the extraordinary debt problems of individual countries participating in the euro area.Among the major stabilization measures - increasing the Rescue Fund of the European Union, on the brink of default. Thus, the EU wants to reassure the stock markets.

ETUC believes that the pact "substantially restrains wages and violates social rights." Belgian trade unions, in turn, fear of losing the existing system of automatic indexation of wages up with inflation.

Trade unions demand that the EU leaders refuse to reform, because of which, in their view, the consequences of the economic crisis will have to pay ordinary Europeans.Representatives of the major union associations in Europe have warned that thousands of similar protests will take place in Spain and Germany.