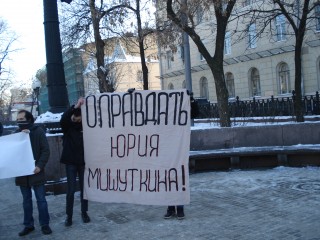 15th of December of 2009 regional court of Primorsky overturned sentence of anarchist anti-fascist Yuri Mishutkin, who was 12th of October given a one-year probational sentence according to statute 108 part 1 of the Russian criminal codex (manslaughter due to exceeding necessary limits of self-defence).

Yuri never denied his guiltiness, and was given a sentence according to this. However one should pay attention to context of the case – Yuri was attacked 22nd of November 2008 by two fascists, who were stronger than him, and who had also assaulted him in the past. Yuri also suffered heavily from Nazi attack to the ecological protest camp in Angarsk in 2007, after which he was in coma due to his wounds. In 2008, Yuri hit Nazi only once with his knife, but this one hit was a lethal one. Due to these circumstances, original sentence of Yuri, that is propabitonal sentence and requirement to pay big compensations to family of the relatives of the Nazi should not be considered too lenient.

Once again we witness persecution of anti-fascists by authorities. If in Moscow, anti-fascist are murdered (last murder took place 16th of November 2009, when a known anarchist anti-fascist Ivan Khutorskoy was shot, in Russian periferia authorities attempt to punish anti-fascists in any suitable circumstances. Overturning of the sentence of Yuri is a proof of political interference to court process.

Right now Yuri is once again in a need of funds in order to guarantee him a proper legal support during new court case. In the beginning phase, lawyer has agreed to work for 20 000 roubles (around 500 euros), which we (Anarchist Black Cross of Moscow) are currently gathering.

For instructions how to donate, you may visit

or write to us by e-mail to ask for other opportunities except a bank transfer ( abc-msk(at)riseup(dot(net).

For any money transfers, please notice to us to abc-msk(at)riseup(dot)net so that we will know which money is for Yuri.